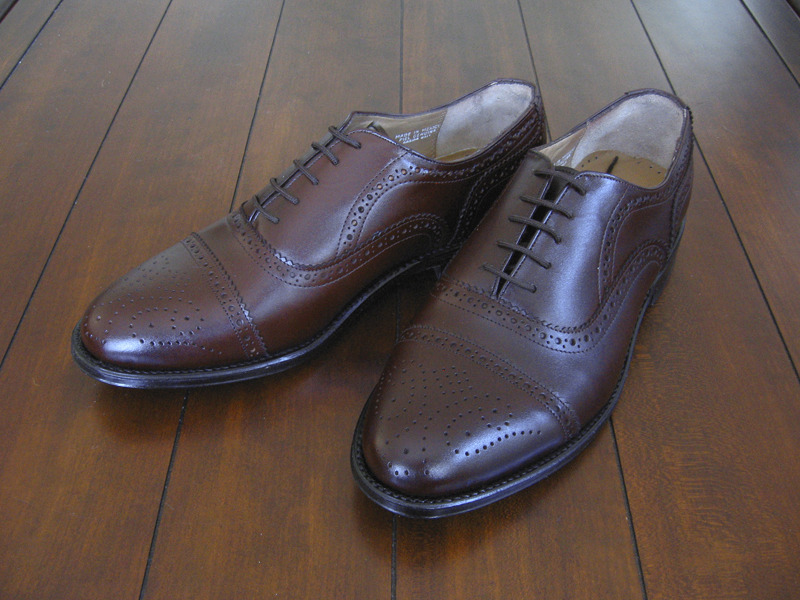 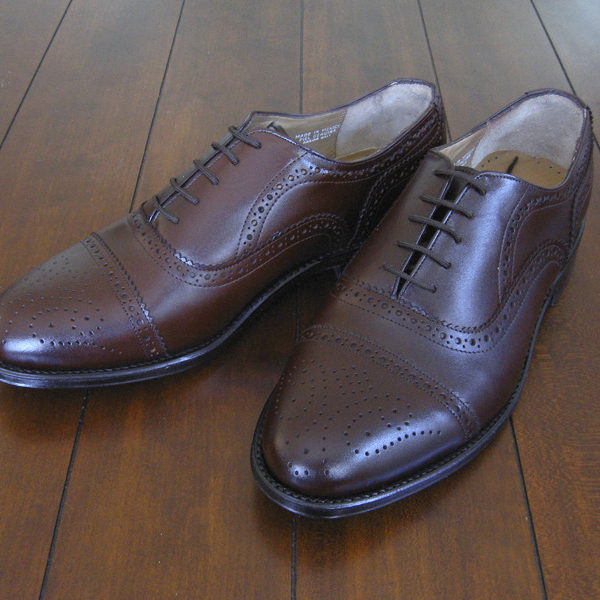 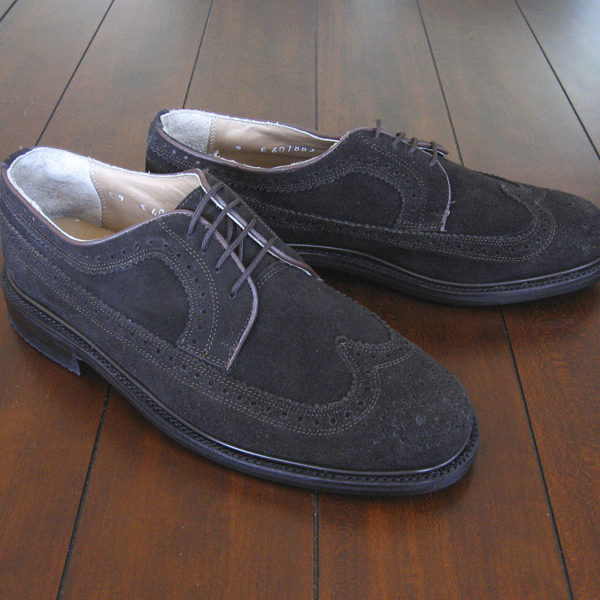 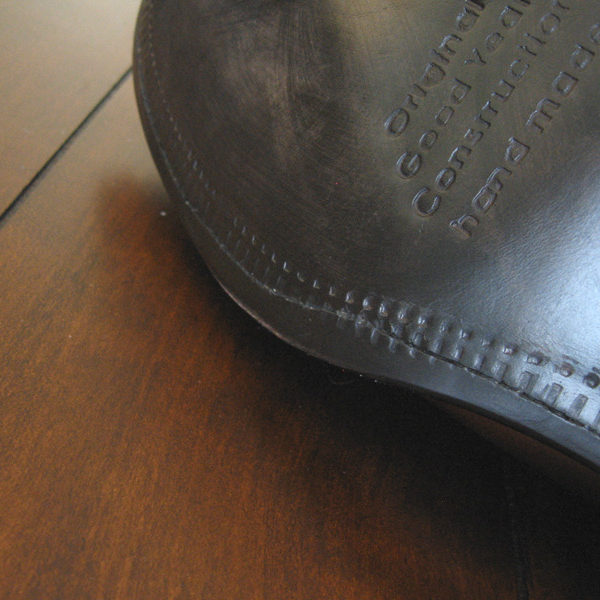 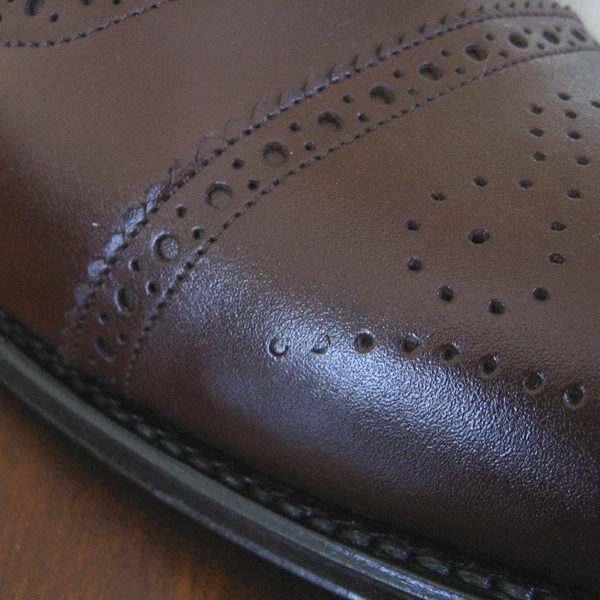 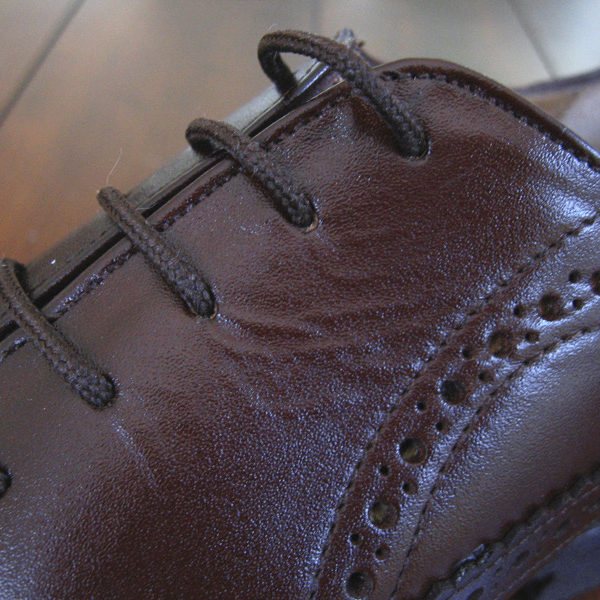 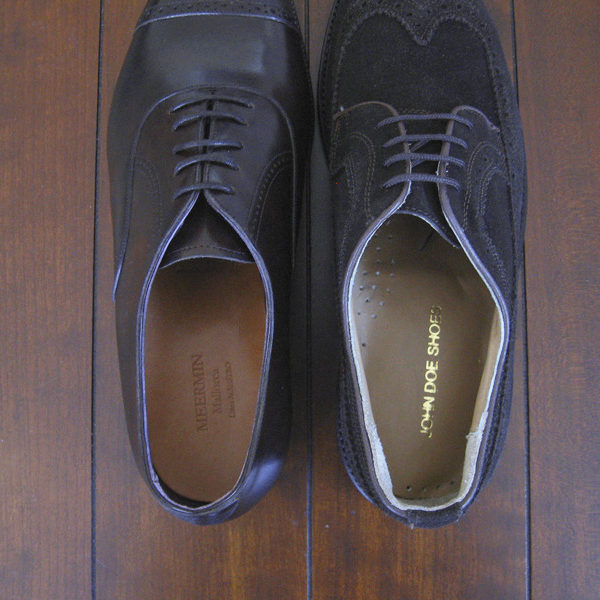 Sometime last week, a menswear blog called The Pantalones published a review of John Doe Shoes – a new company offering Goodyear welted, full-grain leather shoes for $135 shipped. The shoes looked really good in the photos, so I decided to buy a pair for the purposes of doing a review. Apparently the owners of the company recognized my name, knew that I blogged for Put This On, and unsolicited, decided to gift me a pair of their wingtips along with my purchase. So I suppose this is partly a “We Got It For Free” post.

The shoes were delivered quickly, and I can say: they’re as advertised. These are Goodyear welted, full-grained leather shoes with very classic designs. And, as advertised, they are made in Mexico, which is how they’re able to offer these shoes at a relatively low-cost.

Naturally, as you should expect, a $135 retail price is not without some trade offs. The stitching on the outsole, for example, isn’t as straight as it could be, and punch decorations at the toe cap (what’s known as the medallion) isn’t perforated all the way through in some parts, leaving the medallion slightly asymmetrical. There’s also a plastic tube going around the welt of the suede shoes. It’s not something I’ve seen before, but the detail doesn’t seem very well done, as the tube’s ends don’t evenly match up.

All these are aesthetic compromises that, I admit, few people would notice in day-to-day wear. A bigger issue is the quality of the materials used. The leather is full grain, it’s true, but it’s not of particularly high quality (it’s about the cheapest I’ve seen on Goodyear welted shoes). The toe puff, which is the piece of material used to give the toe it’s structure, is made of a seemingly weaker plastic. And whether because of the quality of the glue or the workmanship, the leather lining doesn’t seem to be attached very well. My shoes seemed OK at the vamp (the area of the shoe where it creases the most), but around the eyelets, you can see some wrinkling in the leather as result of this. I’m concerned that the two layers will separate over time and the outermost layer will start to “bubble." The less-than-ideal workmanship on the lining also leaves for not very aesthetically pleasing topline, which you can see in the last photo above. On the left is a Meermin shoe with the kind of topline you’d see on almost any well built shoe, and on the right is John Doe.

Thus, you have to wonder: what’s the point of getting Goodyear welted shoes if the uppers aren’t well made? Goodyear construction just means you can resole the shoes more easily and more often, but that doesn’t mean much if the uppers won’t look good in five to ten years.

I have pretty mixed feelings about these. If you’re looking for affordable, well-made footwear, my recommendations remain the same. The best options, from my experience, are Loake’s 1880 line, Allen Edmonds “made in USA” shoes, and Meermin. Loake’s 1880 and Allen Edmonds’ American-made shoes retail between $300-350, but you can you can find them for less with a bit of smart shopping. You can buy them when they’re on sale, get factory seconds, or search eBay for Loake, Allen Edmonds, or the other companies they manufacture for. Loake makes some of Charles Tyrwhitt’s models, and Allen Edmonds produces some of the American-made, Goodywear welted shoes at Ralph Lauren. If you search around, you should be able to find these shoes brand new for about $175-225.

Another option is Meermin. They have a mainline called the “Classic Collection” and a higher-end line called “Linea Maestro.” Shoes from the Classic Collection cost about $200. Those are decent for the price, but I think you get a much better value when you ask for your shoes to be upgraded to Linea Maestro (any of their models can be specially made-to-order to Linea Mastero’s standards for a $100 upcharge). With those, your shoes will be handwelted, made from better materials, and come with a nicer finishing.

That said, we’re still talking about $200-350 for shoes, and that can be a lot for some people. I remember when I was an undergrad in college, I once found the perfect navy blazer at a consignment store. It was $200, and I paced around outside for a full fifteen minutes debating whether I should get it. It was a ton of money for me back then. I didn’t have time to endlessly hunt for deals, and I had even less money to buy nice things. I eventually decided to get the blazer (and still own it to this day), but if you were to say I also needed two pairs of shoes to rotate through, at $200 a pair, there was just no way I could swing it. The difference between $135 and $200 back then was meaningful.

So, if you can afford them, I strongly recommend the other options on the market. If you can’t, however, and don’t have time to spend on eBay, and aren’t willing to buy second-hand shoes, then these are certainly better than getting something made from corrected-grain leather. And at anything less than $150 full-retail, you’re basically looking at corrected-grain leather footwear with glued on soles. These might not be as good as other Goodyear welted shoes on the market, but it’s good to have options.