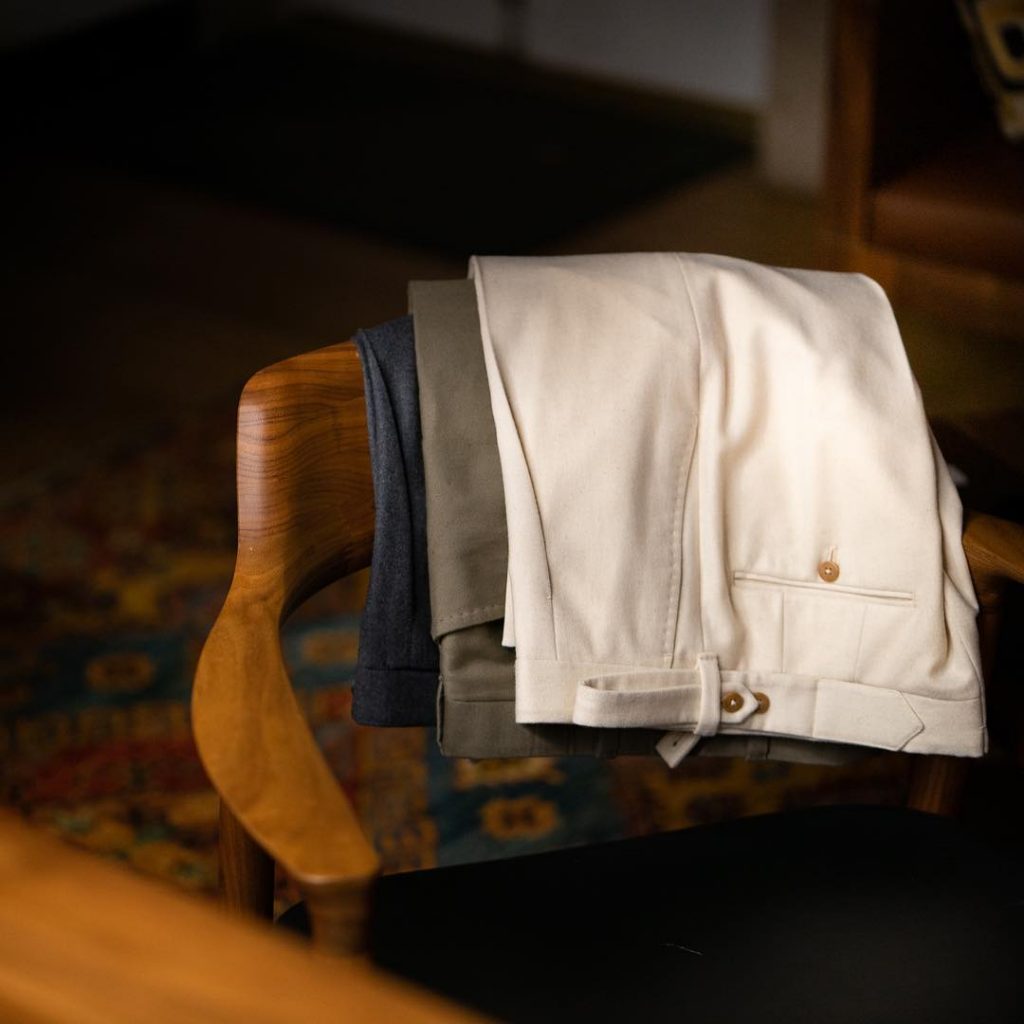 Trousers are usually in the background of an outfit. They play a secondary role, setting the stage for whatever you’re wearing up top. As such, it’s easy to forget about them – especially when you’re building a wardrobe. Almost everyone has blue jeans nowadays, and we’ve talked about the importance of grey pants. However, just as important as color is finding things in the right cloth. For spring/ summer, that usually means something airy, breathable, comfortable, and soft. Here are seven options with suggestions on how to wear them, as well as links to good sources. 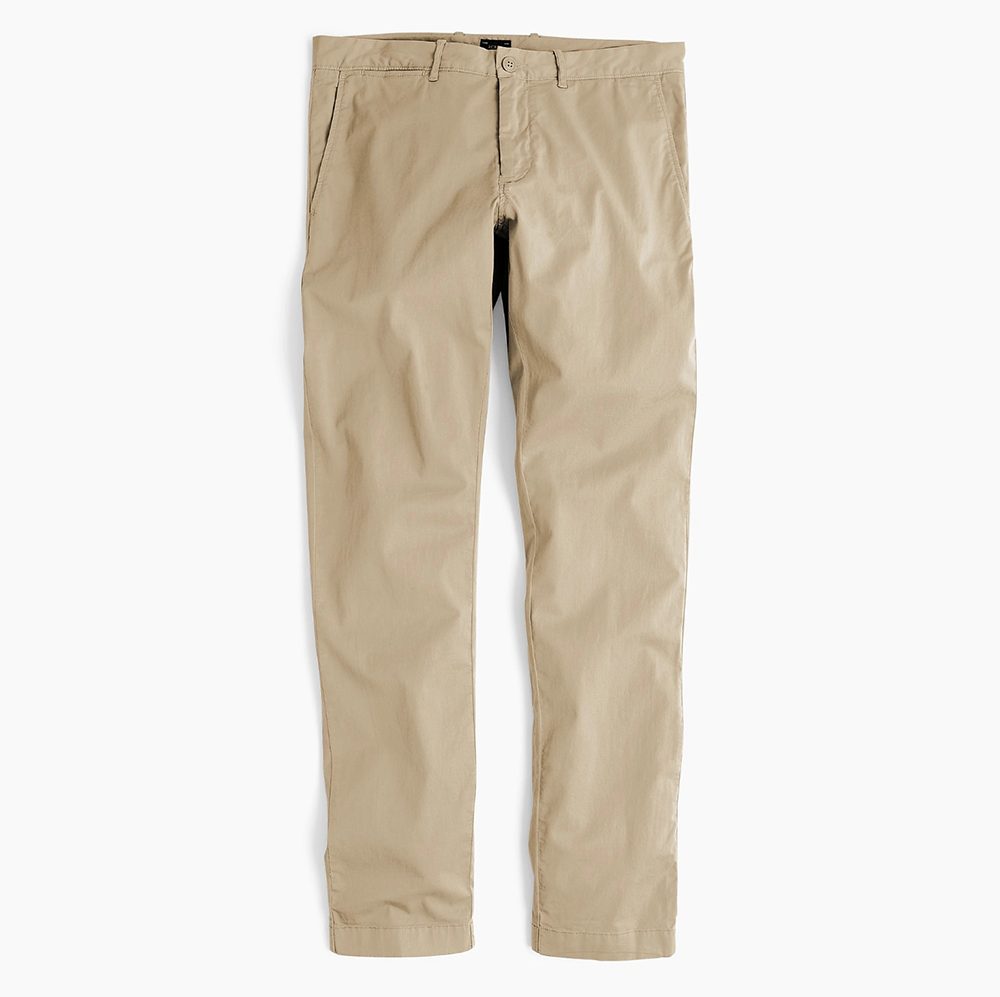 Chinos are the everyman’s everyday everything. They’re office pants, weekend pants, and out-to-dinner pants. They’re more comfortable than jeans, but require less maintenance than tailored trousers. Once standard issue for British and American soldiers stationed overseas, chinos today are now just business casual. They’re a little vanilla, to be sure, but genuinely versatile and useful.

Your most basic pair of chinos will look like the ones from J. Crew pictured above. They’re mid-rise, made from a plain cotton twill (sometimes a stretch blend), and distinguished by their very casual detailing. If you look at the outseam and inseam, you’ll typically see two lines of stitching. The fabric between these stitches will be puckered (in the photo above, you can see some of the puckering on the waistband). Certain chinos, such as Sid Mashburn’s, are also garment dyed, which makes them more casual still.

Basic chinos can be worn with almost anything: untucked flannels and oxford shirts; simple sweaters and casual outerwear; sneakers, boots, and loafers. They’re most versatile in colors such as stone, khaki, and olive, although mid-grey and dark blue can also be useful in certain situations. They are, however, a little too casual for dressier outfits, such as sport coats and spread-collar shirts. Treat them as your knock around pants. 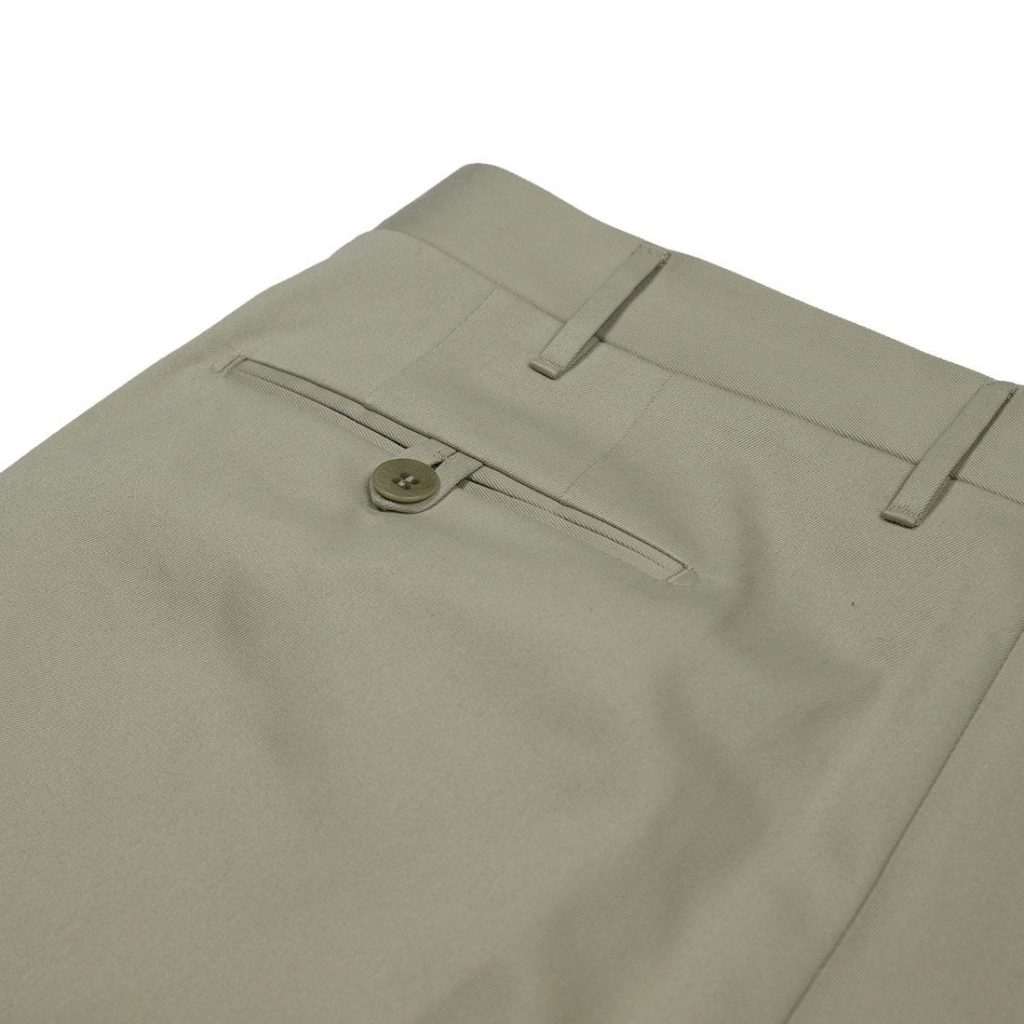 Dress chinos are the fancy man’s chinos. They’re Mother’s Day chinos. They’re the kind of chinos where, if someone asks why you’re so dressed up, you can legitimately say: “What? They’re just chinos.”

What makes dress chinos, dress chinos? They look cleaner and sharper than the ones you’ll find in nearly every mall. The outseams and inseams don’t have any visible stitching. There’s no puckering. There’s certainly no garment dyeing. These are the cotton counterpart to your tailored wool trousers. Like traditional trousers, the lengths are usually left “unfinished,” which means you’ll need to take them to a tailor to get them hemmed.

Dress chinos are ideal if you like things that can be described as “smart casual.” They go with sport coats and ties, oxford button-downs and long-sleeved polos. They can be worn with sneakers, but they’re usually better with minimalist Common Projects (the dress chino of sneakers), rather than Nikes. I prefer them with casual leather shoes, such as Norwegian split toes and penny loafers. The downside? Since they’re made like dress pants, they’re usually a lot more expensive. Expect to pay north of $150 and have to dry clean them every once in a while. 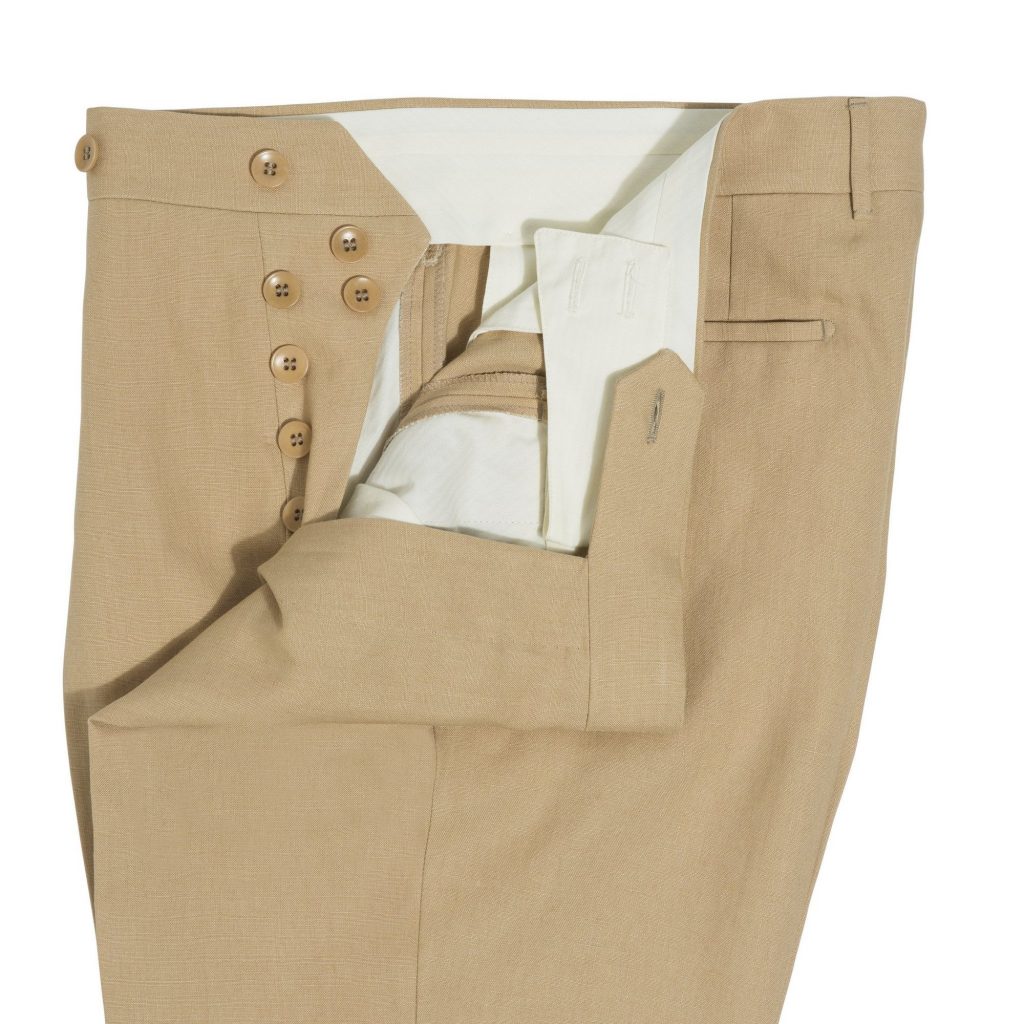 For nearly a millennia, linen been used to make everything from home products to apparel. Bedsheets, for example, are sometimes called linens because they were customarily made from flax fibers, linen’s source material. Linen is cool to the touch. It’s breathable and wicks moisture away from the skin. And while it can be scratchy when new, it breaks in over time and becomes butter soft.

Those qualities are why linen trousers can be so useful during the dog days of summer. They wear cool and are breathable, but can look a little more tailored than chinos or jeans. Broadly speaking, British mills often weave linen fabrics a bit tighter, which helps reduce the wrinkling – making the material more rumpled than crinkled after a long day’s wear. Italian linens, on the other hand, are more loosely woven to allow for better breathability. If you’re anxious about wrinkling, aim for a heavier fabric and/ or something made from a linen blend.

When choosing a pair of linen trousers, pay attention to its weight, sheen, and weave. Cream and tobacco brown make for an excellent first color. Dark blues also work well, although I think something in a shade lighter than navy looks more summery.

(photo via The Armoury) 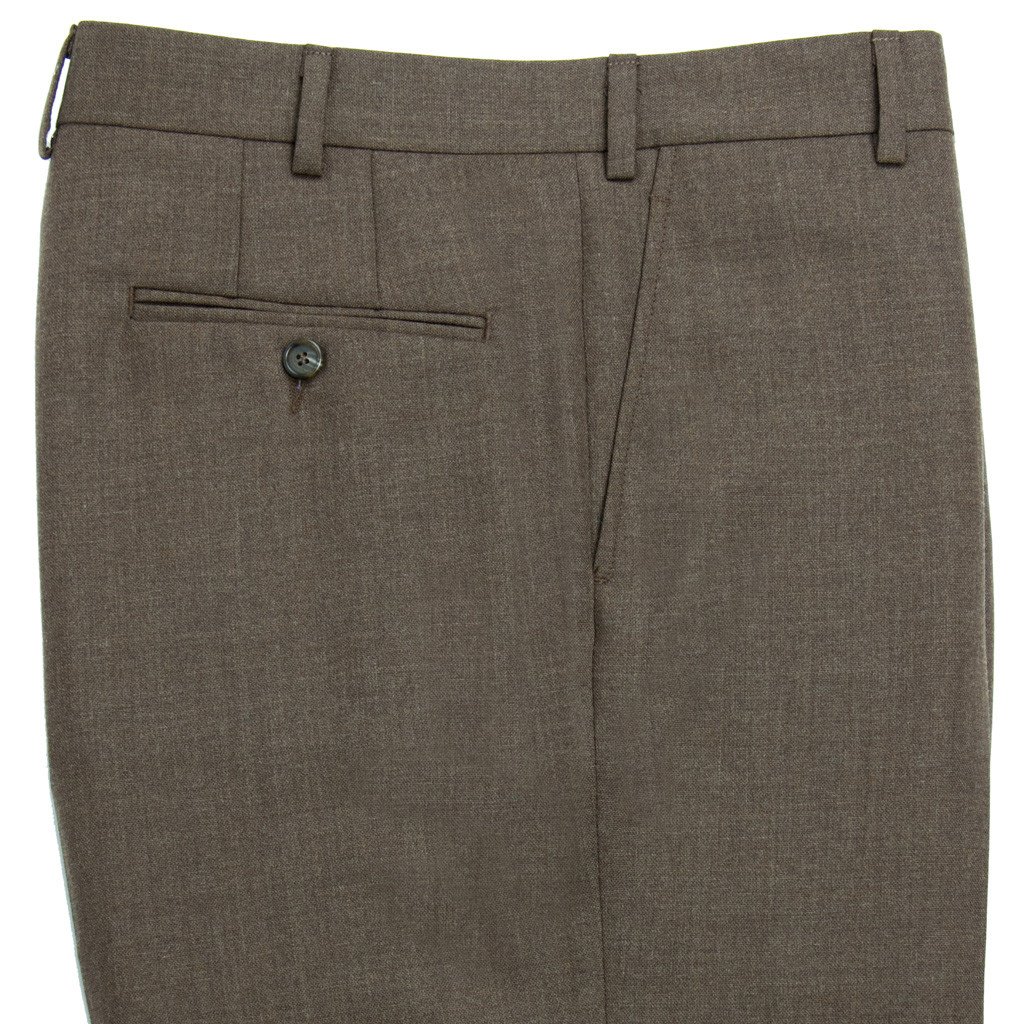 By using a stronger yarn, you can get two things. For one, high-twist wools are often made in loose, open weaves – known in the trade as tropical wools for how well they allow body heat to escape. Second, high-twist wools have a natural tension, such that the fabric readily springs back, helping the garment shed wrinkles. This makes high-twist wools ideal for garments worn in the spring and summer months, as well as anything that will frequently be used for traveling.

For men who wear sport coats, tropical wool trousers will be your workhorses. They’re dressy enough for tailored jackets but breathable for summer. They don’t wrinkle like linen or cotton, but can be cooler wearing depending on the openness of the weave. Get them in your usual light- to mid-grays, as well as tan. They’re the warm weather equivalent of wool flannel trousers. 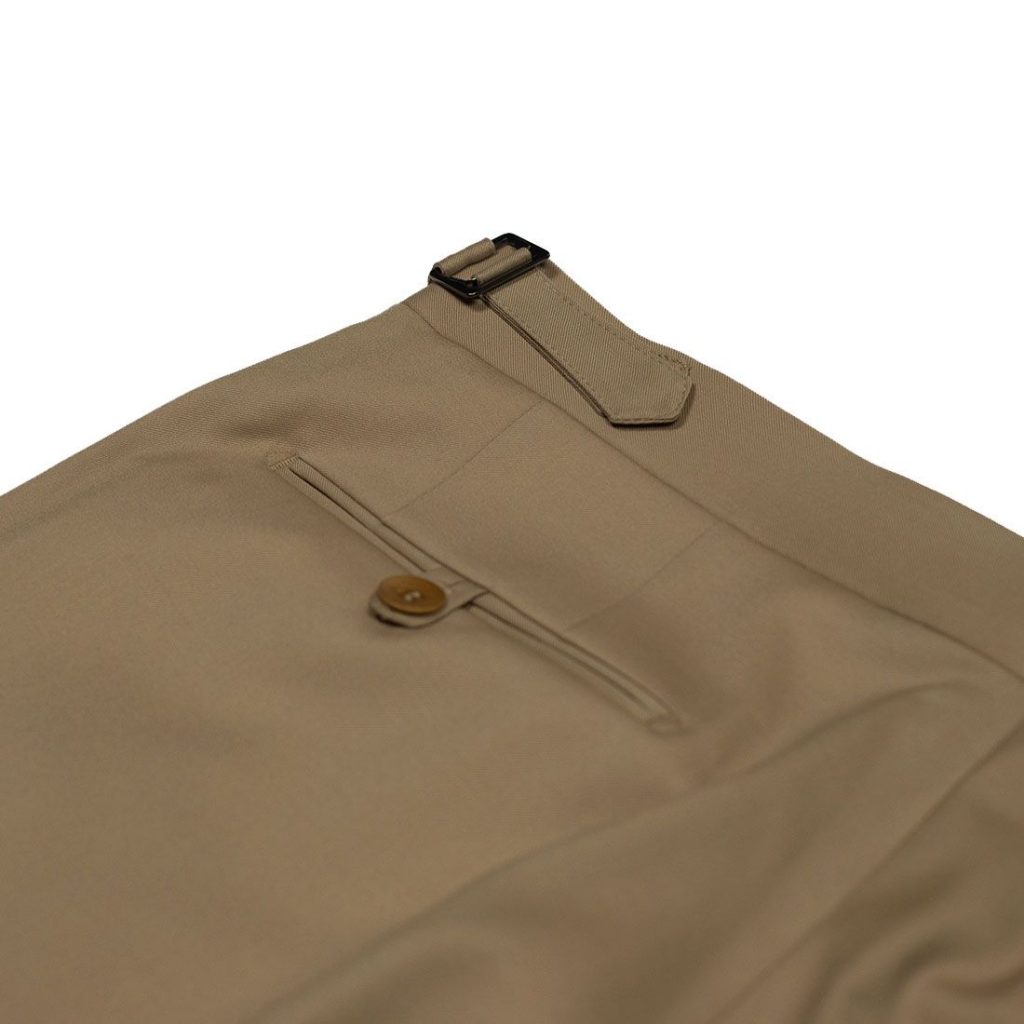 Gabardine is a tightly woven, medium-weight fabric favored for its sturdiness and versatility. As a twill, it is distinguished by its steep set, diagonal cords, and can be made from either cotton or wool. Wool gabardine is commonly woven in a solid color and typically used to make suits, trousers, and sometimes raincoats. The material hangs like iron, stretches where you need, and has a wonderful, almost silky hand. In cotton, the tight weave also gives the fabric a natural water-resistance; in wool, it has a certain spring-back quality that helps it resist wrinkles and retain its original shape.

Twills are inherently more tightly woven than plain weaves, which is why something like gabardine will wear a bit warmer than tropical wool. I mostly keep them to spring and fall, but if you live in a temperate climate, they can work during the cooler days of summer. 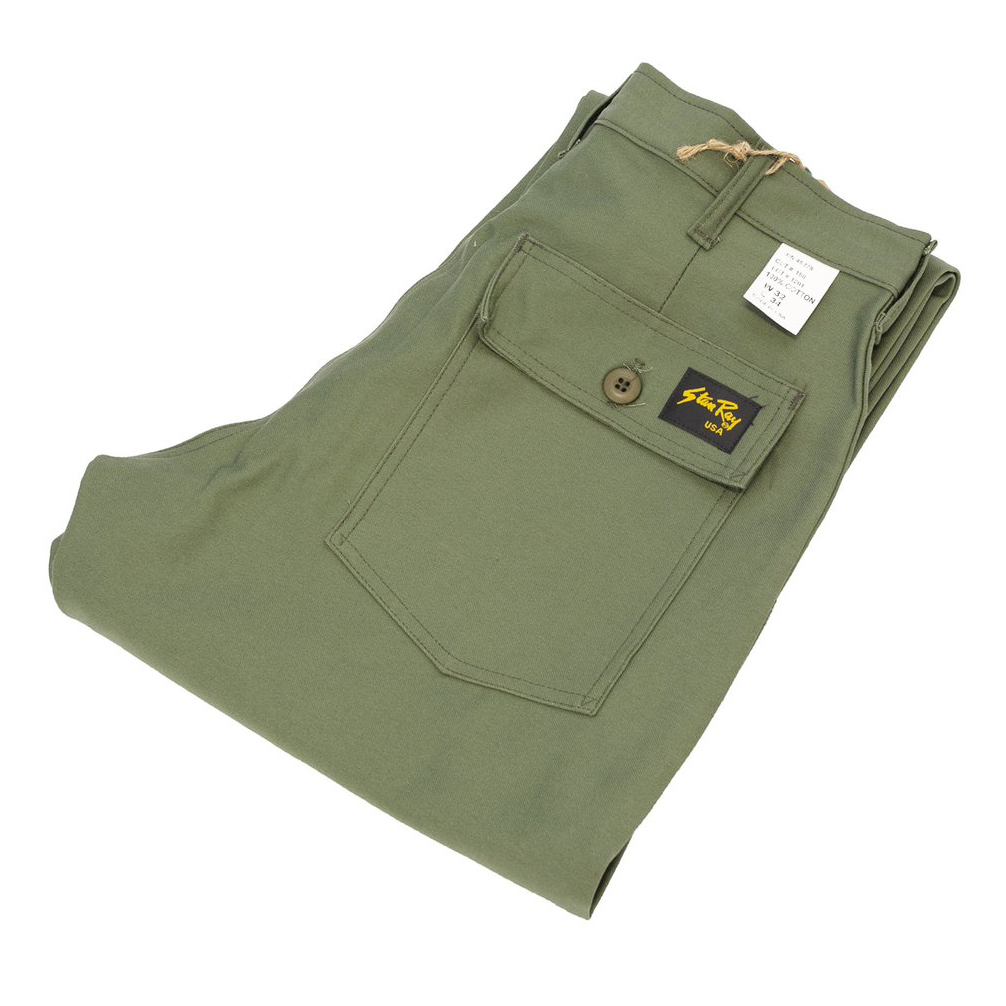 The Office of the Quartermaster General — the US Army department in charge of designing and supplying equipment — originally made military fatigues out of an 8.5oz cotton sateen known as OG-107. Like chinos, fatigues came into civilian life through discharged veterans, who returned home from the distant trenches of Western Europe and East Asia still wearing them. It’s hard to argue with their practicality when they were literally worn in the hot tropics of Southeast Asia.

Fatigues are an easy and often cheap alternative to denim. In the summer, they go great with simple canvas shoes, such as Chuck Taylors. In the fall, they sit naturally above service boots. Vintage ones can fit a bit full, but you can give them shape by pinrolling the hems. Fatigues sit most naturally with workwear, but they can also be worn with almost anything that’s classic Americana. 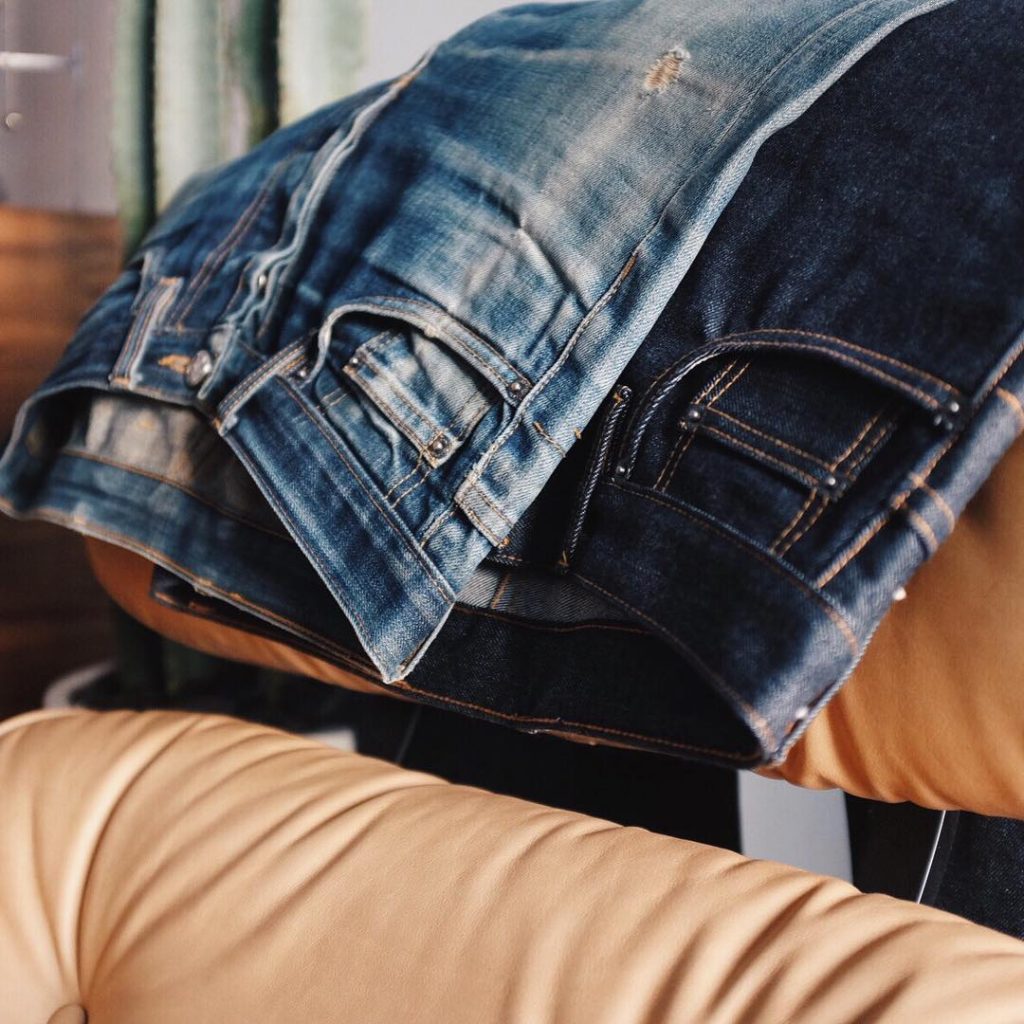 Some men look great wearing tailored clothing year-round, but I can’t imagine building a wardrobe without blue jeans. They’re practical, hard wearing, and frankly look great. In the summer, however, if you want something more comfortable than your standard, mid-weight raw denim, try something made from a slightly lighter fabric. These will be softer and require less break-in time.

3sixteen, for example, has a slightly lighter weight 12oz jean to their 14.5oz flagship denim. “12oz was the lightest that we felt we could go before robbing the denim of its personality,” says 3sixteen co-owner Andrew Chen. “There’s a misconception that lighter weight denim doesn’t fade as well. Our lightweight jeans wear in just as beautifully since we used the same warp threads on our 14.5oz jeans as we did on the 12oz versions.” The jeans have also been garment rinsed and then hung dry — not necessarily a distressing process, but basically the same as an initial at-home soak. “It gets rid of some of the starch that is imparted to the denim during the sanforization process, and overall it makes the jeans lighter, softer, and a bit easier to break in,” says Chen.