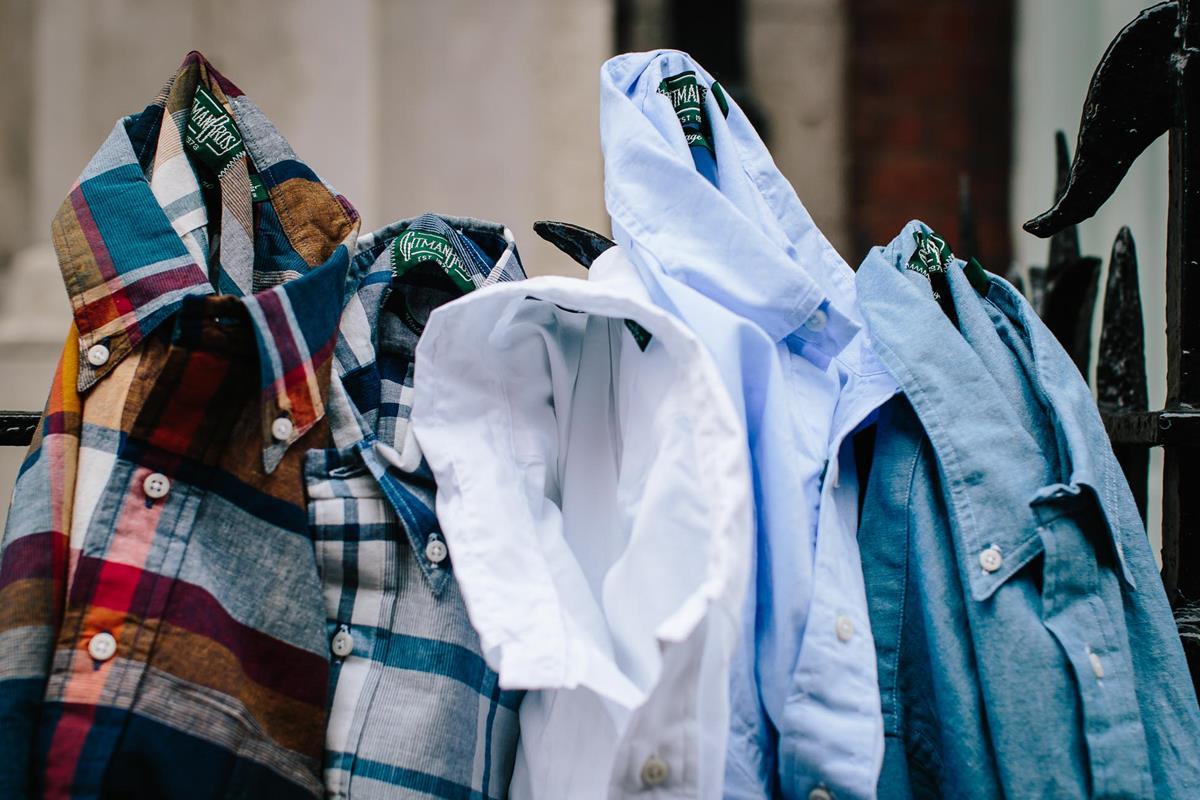 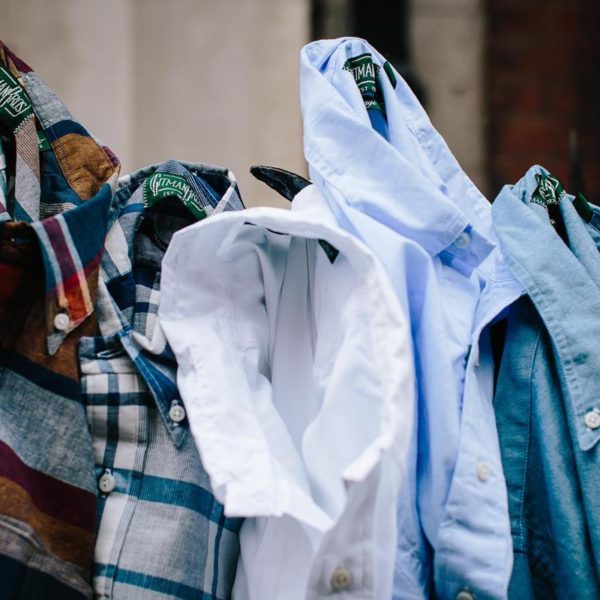 There’s an old saying about how there’s no such thing as bad weather, only bad clothes. I would amend that to say bad materials. Just as we rely on heavier tweeds and flannels in the wintertime to stay warm, keeping cool and dry in the summer starts with the right cloth. And this past weekend, when we had another heat wave, I was thankful to have some seasonally appropriate shirts. You don’t need complicated, tech fabrics to stay dry. Simple, natural fibers (often derived from plants) are still the way to go. It helps, however, to know which fabrics help you eek out that extra bit of summer comfort. A rundown of some options:

More important than anything else, how cool a fabric feels is determined by its weave. This is why we often recommend tropical wool jackets and trousers in the summer. Even if a fabric is made from wool, an open weave will allow your body’s heat and moisture to escape, leaving you feeling more comfortable than if you were wearing something made from a dense linen.

For shirts, however, the calculation is a little more complicated. Here, a very open, airy weave can leave the shirt looking gauzy. You’ll feel like you’re not wearing anything, but look like it too. The trick is to find something that balances out comfort and wearability.

The most breathable of shirtings is voile, which is a featherweight, porous fabric made from cotton. It’s great for the most brutal of climates, but might leave you feeling a bit indiscrete. Pro tip: go for a darker color, such as these from Dduggoff or Junya Watanabe. They’ll do a better job of hiding your body underneath than the same fabric in white.

For something less sheer, our advertiser Proper Cloth has some slubby Japanese cottons and a new material called Airtex. The second, pictured above, is breathable fabric, but made in a weave that’s similar to pique cotton (the material you find on polos). Both are good enough to wear on their own, even in casual business settings. I also like YMC’s Malick shirt, which is almost transparent when you hold it up to the light, but not when you have it on.

Much of what’s been written about linen misses what makes the material so great for shirts. Linen is exceptionally good at wicking moisture from the skin, which means it’ll leave you feeling drier on a hot, humid day. Compare that to cotton, which will cling to your skin all day at the slightest hint of sweat.

It does wrinkle easily, however. If that bothers you, get a cotton-linen blend, which will hold its shape better throughout the day. Brand new linen can also feel scratchy at first, but the material softens with wash and wear. The best bed sheets are often made from long-staple linen fibers because of how soft and comfortable the material feels on warm nights.

You can find linen shirts at all sorts of places. J. Crew’s are an exceptionally good value. Their collars feel a bit skimpy at times, but the construction and materials are good for the price. I also like the ones at Proper Cloth, Ledbury, The Armoury, and Gitman Vintage. The awning striped one you see above is from Drake’s.

Oxford can seem like a strange summer fabric. It’s typically a heavier, thicker shirting, which doesn’t seem like the sort of thing you’d want to wear on a muggy day. But here’s the thing: plain weaves are more breathable than twills. The difference can be small, but given a choice, you’re better off with a chambray, an end-on-end, or a loose basketweave when temperatures climb above 80.

Of all the plain weaves, oxford is my favorite. Over the years, oxford-cloth button-downs have come to symbolize all that’s good: casualness, youth, trustworthiness, dependability, and professionalism. They can also be worn with nearly anything – jeans or pressed trousers, sneakers or dress shoes, field jackets or sport coats. They’re just about as versatile as a shirt can get, particularly in light blue.

If you’re looking for provenance, start with Brooks Brothers. They’re the inventor of the style, after all, and their OCBDs now come with unlined collars (allowing the color to have a bit more expression). Michael Spencer offers the same cuts and unlined collars, but with customizable options and at lower prices (they’re having a sale, which ends today). Mercer & Sons has one of the best looking collars, but their shirts often fit like sails. Kamakura offers trimmer cuts, but their collars often only look good when worn without a tie. Proper Cloth is somewhere in-between these two worlds – a versatile, handsome collar, which you can put onto any made-to-measure shirt. For value, nobody beats Lands’ End.

As the story goes, Madras was imported into the US by way of Brooks Brothers, who took the traditional Indian cloth and made them into shirts. When they sold the shirts, however, they found customers coming back angry, complaining about how the vegetable dyes bled in the wash. Henceforth, Brooks Brothers marketed that as a feature, not a liability. Their madras shirts were “guaranteed to bleed,” they said. Which over time, gave their shirts a semi-watercolor like appearance.

It’s hard to find bleeding madras nowadays. Few people want to put up with their special care instructions, so most manufacturers stick with madras-inspired designs, rather than the originals. That means you still get those bright tartans, but they won’t bleed in the wash and ruin your other clothes.

J. Crew is great for affordable madras-inspired shirts. Theirs fit slim, but not unreasonably so, and come in really nice patterns. There’s also Brooks Brothers and Ralph Lauren, the two stalwarts of major prep retailing nowadays, although I think Ralph Lauren’s shirts look better without that pony logo (no logo-free options in madras this season, unfortunately). You can also try O’Connell’s and Gitman Vintage, both of which are a step above in terms of quality.

If you’re not familiar with the word rayon, you’re definitely familiar with the material. It’s commonly used to line suit jackets and sport coats, as well as some casual outerwear. Rayon first became popular in the 1920s as a substitute for silk (indeed, it’s sometimes referred to as “artificial silk”). It has the same supple and smooth texture, but is cheaper to produce. More importantly, it doesn’t wear as warm, which is why bespoke tailors have mostly given up silk linings for rayon.

Unlike cotton or linen, however, rayon doesn’t soak up sweat very well, which means moisture can get trapped inside a rayon shirt on a hot day. Still, if the weather has a dry heat to it, I find rayon to be great for summer. There’s something cool and refreshing about feeling it against your skin. The other downside is that it typically has to be dry cleaned or handwashed. On the other hand, I find I can get a few more wearings out of a rayon shirt, at least compared to cotton.

It’s hard to find good rayon shirts, unfortunately. Bryceland’s in Japan has some great mid-century prints, one of which is pictured above. They’re getting some new stock next month and can take email orders. Alternatively, Two Palms uses the material. Their Aloha shirts aren’t the best made (the interiors are roughly finished and the collars could use better linings), but they’re nicely affordable at around $40. You can find them at Independence and their online site.

Finally, there’s seersucker, which is an American classic. The puckered texture is made by pulling certain lengthwise yarns, known as the warp, a little tighter than the rest. That puckering is said to allow air to circulate better than regular shirtings, although I find the material to be just better at not sticking against sweaty skin. Just as important: seersucker launders easily, doesn’t require ironing, and has a sort of casual, pre-rumpled look. Perfect for the dog days of summer.

You can find seersucker shirts at many of the same companies mentioned above – J. Crew, Brooks Brothers, Gitman Vintage, Proper Cloth, and Michael Spencer. Additionally, Camoshita has a cream colored one this season with a band collar, which will look a little less preppy than a blue-and-white button-down (although, nothing wrong with that). Club Monaco has something similar, but at a more affordable price. I also like these white short sleeves from Portuguese Flannel and New England Shirt Company.

A word of caution: navy seersucker can be a nice way to modernize the look, although dark colored cottons will show their age more easily than white. It gives the fabric a more casual appearance, but if you want the shirt to keep its new look a little longer, go with a lighter color.