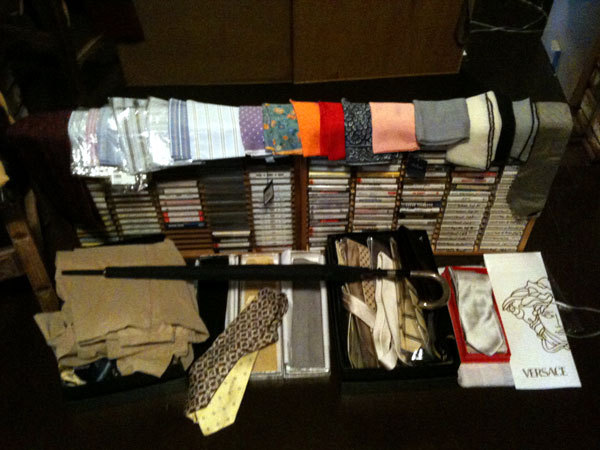 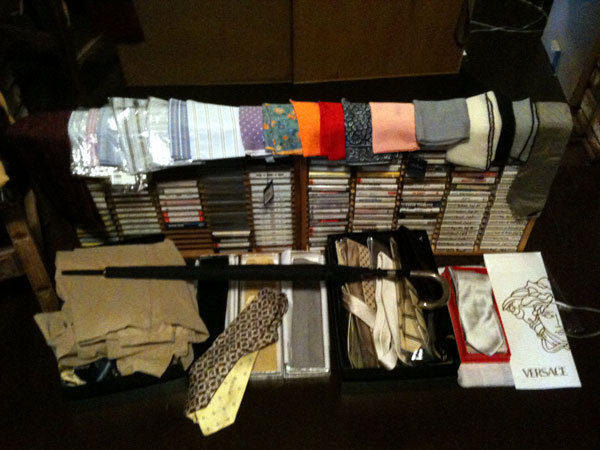 Above is a photo of my greatest second-hand score ever. One that will likely remain my greatest score ever for the rest of my life, unless I find a cache of Savile Row suits that fit me perfectly or something. I’m still vibrating from the excitement.

So I responded to a Craigslist ad that I found through a saved search for some brand or other… Brioni, maybe. It’s a moving sale, but no address, just a phone number. Talked to the woman, and she gave me her address, told her I’d head up there after my dog’s obedience class.

I live in Silver Lake, on the East side of Los Angeles, and she lived in the Hollywood Hills, on the west side, so it took me a solid 30 minutes to drive there. I was kind of tired, and thought, “Why am I doing this?” It was almost two miles up the hill from Sunset Boulevard.

I get there, and it’s a small but very beautiful a-frame. You can literally see all of Los Angeles from this spot. It was absolutely amazing.

I knock on the door, and she opens it, and it’s a pretty woman maybe in her 40s, dressed like an LA new-agey type straight from Central Casting. Right away, though, I can tell she’s 100% for real and a nice lady. Moments later, she tells me she’s a yoga practicioner. She is very sincere, very kind, and not at all flaky for someone who off-handedly mentions she’s psychic. Twice.

Her house was laid out like a sort of yard sale, with all kinds of women’s clothes and household stuff all around.

She shows me back to the bedroom where the men’s stuff is, and there’s a table of Ed Hardy-ish rock star clothes (frankly a little nicer than that sounds, but still very, very not to my taste) right by the door, and I think maybe it’s not the place for me.

Then I see this box of neckties. I bend down to check it out, and the first tie is an amazing striped grenadine Sulka. Then the next one is a Brioni. And so on and so on.

Above them is a pile of handkerchiefs from Facconable and Turnbull & Asser. To the right is another box full of neckties.

A little negotiating (she was psychic, so I was at a disadvantage) and one trip down and up the mountain later, I handed her $750 in cash.

Here’s what I ended up with:

– A silver-handled purple label umbrella.
– A Sulka trench coat.
– About half a dozen Turnbull & Asser pocket handkerchiefs in their wrapping, and about fifteen more squares, mostly by Facconable, mostly unused, some with tags, including four in a gauzy blend of cashmere and silk that is almost unimaginably soft and beautiful.
– 45 ties. Of these, about three or four are clunkers and a few are Versaces. The rest are Borrelli, Brioni, and Sulka with a few Oxxfords thrown in for good measure. Almost all are basics, almost none are dated (though most are wide-ish). Most seem to be unworn, including about ten Borrellis which are still in their packaging.

The woman was incredibly nice, and was very happy the things were going to a good home. She told me that I can expect a lot of money coming in. Also that the neighborhood I’m thinking of moving to is a very blessed place.

I can only imagine who her ex was. Bryan Ferry or something.