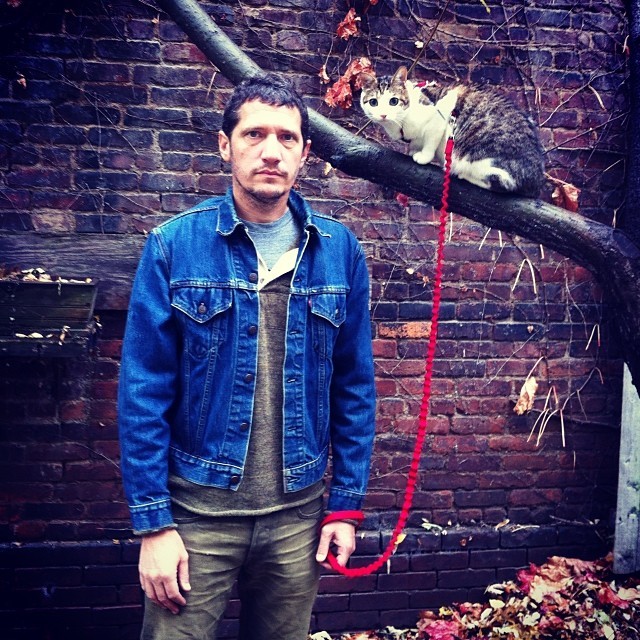 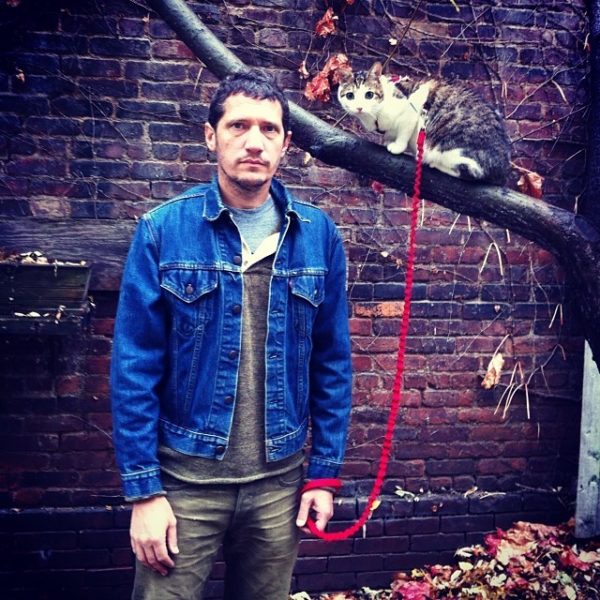 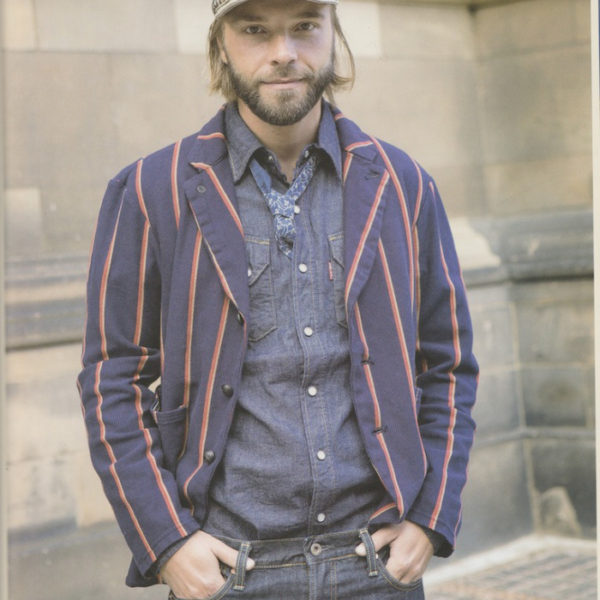 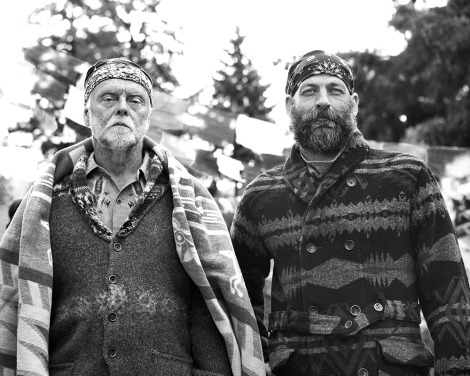 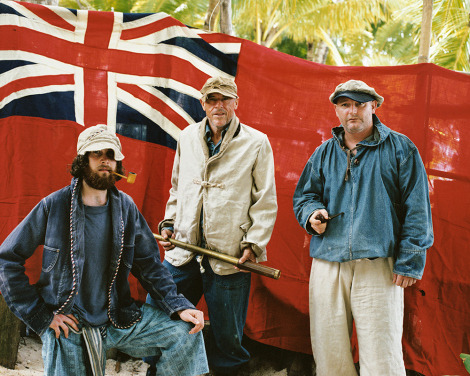 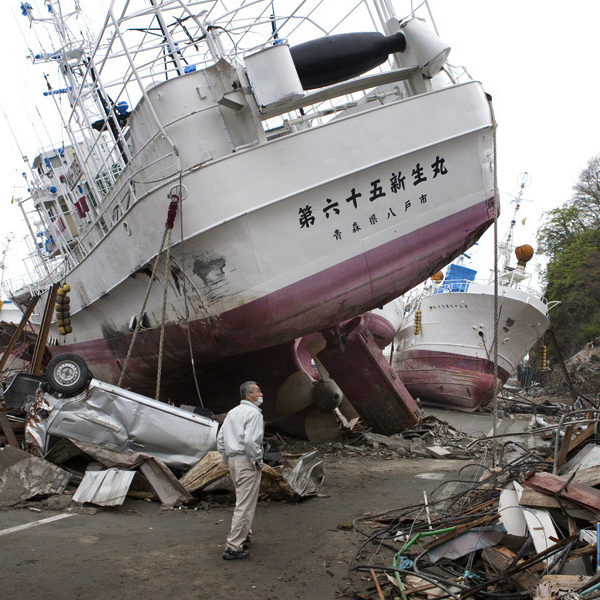 Although there’s something really satisfying about clothes organized neatly, clothing looks better in situ, and few people put interesting clothing on interesting people in interesting places like Kapital and photographer Eric Kvatek (pictured, with cat, above). Kvatek has worked with Kapital designer Kiro Hirata since 2005 to build the brand’s seasonal lookbooks, and they establish the brand’s out-there, indigo-tinted world, rooted in vintage textiles but untethered from exact reproduction of denim and workwear.

Lookbooks like Kapital’s are essentially very small circulation print ads for a brand. They’re put together as marketing material to sell their visions–sometimes they’re little more than pamphlets of pictures of clothes, but Kapital takes it several steps further, publishing thick, individually themed books of on-location photos, often using nontraditional models. In order to get behind Kapital’s books a little, I talked with Kvatek, whose dual backgrounds in vintage dealing and documentary photography really come through in his work for Kapital. Pete Anderson: Hey Eric. I know you’ve been a photographer since the late 1980s and have been into vintage clothing a long time. How did you break into clothing work?

Eric Kvatek: I’m from Ohio originally, and attended the University of New Mexico in Albuquerque for a fine arts degree in drawing. My original intention was to be a documentary or reportage photographer. However, in the early 1990s, I got sidetracked by a business selling vintage American clothing in Japan. It was insanely time consuming, but I learned to speak basic Japanese and I became familiar with Japanese culture.

Pete: That seems pretty early in the explosion of the vintage market.

Eric: My days as a vintage dealer—I was wearing vintage clothing because I liked the designs and the quality. There was a real low point in clothing quality from the 1970s to the 2000s. Most classic American brands had sunk real low. So when I wanted a pair of jeans or a leather jacket I just went to the thrift store or a fleamarket. Even before I was dealing vintage, I was very aware of the quality of an older pair of Levi’s, for example. I did not know why they were better, I just knew they were.

In 1993 I was particularly obsessed with vintage jeans, always looking for better and older ones. There were no guidebooks or internet, really, at the time, so I learned about vintage clothing on my own. Nobody really taught me. I just compared details. I figured out that horsehide is more difficult to find, etc. When I took on my own pickers, it forced me to photograph and document items that I wanted, so I made my own vintage guidebook and gave it to my regional pickers.
When the internet hit, everything changed, and I lost interest in being a dealer.
Pete: Is that when you stared working with Kapital?

Eric: In 1998 I moved to NYC and my vintage connections almost immediately introduced me to a Japanese denim line called 45rpm. When they saw my documentary photos they asked me to shoot their catalog in that style. While shooting for 45rpm I became friends with Kiro Hirata, the designer of Kapital. In addition to Kapital, I’ve shot for Replay Jeans, Free People, PRPS, and Free & Easy magazine.

Pete: Kapital specializes in a worn, “wabi-sabi” sort of look. Is that something you identify with personally?

Eric: I grew up in a variety of locations, deep rural to utterly urban. I wore a lot of hand-me-downs because of my economic situations growing up. I’ve been wearing vintage jeans, farm boots, and jean jackets my entire life; I basically dress the same as when I was 5 years old. My mother or I were always mending and repairing clothing, so the Japanese concept of wabi-sabi is fairly familiar to me.

Pete: How do the Kapital lookbooks come together?

Eric: Each book is a collaboration between me and Kiro Hirata. We chose the location together. I then spend a week before each shoot casting all the people, prop shopping, and deciding on specific locations. Sometimes Kiro has a strong feeling about the theme, other times I am able to influence the feeling more. Kiro and I have been friends for almost 15 years. We constantly challenge and inspire each other.

Pete: Has working for Kapital influenced what you wear yourself?

Eric: Being around Kapital has made my wardrobe a little more funky, but basically I wear jeans, leather jackets, and plenty of camo. I don’t believe in radical wardrobe changes. I wear jeans and boots to weddings. I never wake up on the morning of a shoot and put on a photographer’s costume.

Pete: When you’re not working for a brand, what else do you photograph?

Eric: I always enjoy taking documentary photos. I was in a unique position to photograph the aftermath of the Japan tsunami [in 2011]. I flew there a few weeks after and made three more trips after that. I was in the middle of Hurricane Sandy, too, so of course I shot as much as I could. I am in the Philippines right now trying to shoot as much as I can. New Jersey post-Sandy, by Eric Kvatek.
Pete: With all the vintage influence, do you work with vintage equipment?
Eric: I really resisted digital. I started shooting film in 1985. I bought my first digital camera in 2005. By 2009, I gave up shooting film. I like the idea of having a physical tangible piece of film that my photo is stored on. Properly storing and managing and backing up hundreds of thousands of digital photos can be tedious. But honestly, I love digital photography, because I love to shoot a lot. On a Kapital job I shoot over 10,000 photos in a week. When I’m shooting personal stuff I’d rather shoot more than less. Digital is liberating in that way.
Pete: As someone constantly in motion, do you have any travel/style tips?
Eric: My travel style:

Pete: Thanks for your time, Eric. Check out Eric’s portfolio (semi-NSFW, he also shoots lingerie lines), or follow him on instagram. Kapital clothing is available at Hickorees and Unionmade.