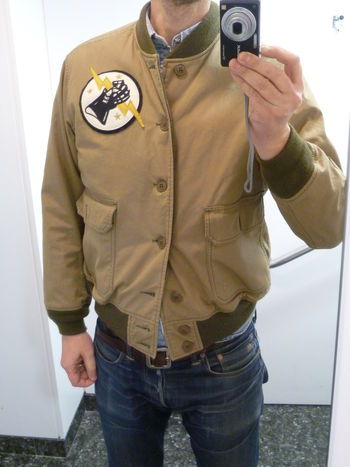 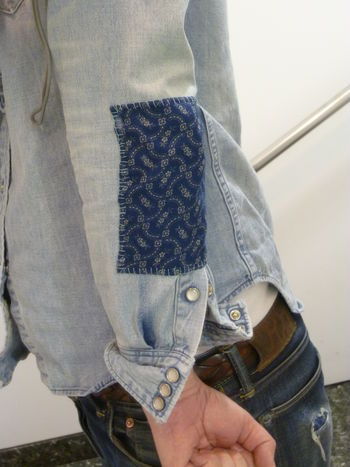 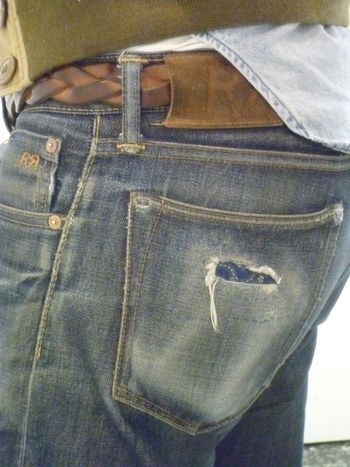 Not nearly as cool as Jesse’s repair, but following his post, I thought I’d share these photos from StyleForum member Ghost01. These were recently posted in a thread dedicated to RRL, which as many people know, is Ralph Lauren’s workwear line. RRL was set up in 1993, and is heavily inspired by Ralph Lauren’s private ranch, which he runs with his wife Ricky (hence the name RRL). That means lots of American workwear inspired by country and vintage clothing. You can see the ranch in an interview Oprah once did with Ralph Lauren and his family. (Warning: it’s beautiful).

Anyway, Ghost01 had an RRL shirt and a pair of jeans that were falling apart. The elbow on the shirt had worn through and there was a hole in the back pocket of the jeans from where his wallet is usually kept. His solution? Patch up both holes, at home using his own sewing skills, with an old RRL pocket square that he had laying around. I think the results look pretty great – a practical solution that’s also in keeping with RRL’s aesthetic.

The top photo is of Ghost01 in an RRL jacket. That piece hasn’t been repaired, but I’m posting it because I think all three pieces – the jacket, the newly repaired shirt, and the newly repaired jeans – go together quite nicely for a casual look.