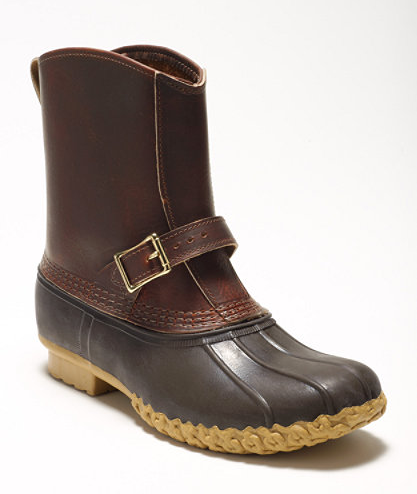 Last weekend while heading out to meet friends for what would later prove to be an ill-considered attempt to capitalize on National Margarita Day specials, I stood waiting for the bus and noticed another gentleman in a suit, overcoat and a pair of unique Bean Boots.

Being a bit of a nerd and also wearing my Bean Boots, I couldn’t stop myself from saying, “Nice boots!"

What struck me about his boots though was the lack of laces and a buckled strap across the front. I remarked that I’d never seen such a boot before and he said, "Oh, that’s a shame. I bought these a long time ago. I couldn’t stand the laces like yours have."

I understood his frustration. The laces work great when you want the boots tight and will be wearing them for a long while, but they do take a little bit more time to put on and take off. A slip-on model would be ideal for office commuting, allowing you to quickly remove them at your desk.

The model of the boot is called the "Lounger" and L.L.Bean had discontinued the boot for a while until back in 2010 when Red Clay Soul started a campaign to bring them back and they returned in the form of a shearling-lined boot – but sans the buckle.

But while searching their site today, I noticed L.L.Bean has brought back the 1970s Bean Boot Lounger model – complete with buckle – to their Signature line.

For those of you trudging to work in snow and slush and who hate laces, it’s worth giving the Lounger a look.