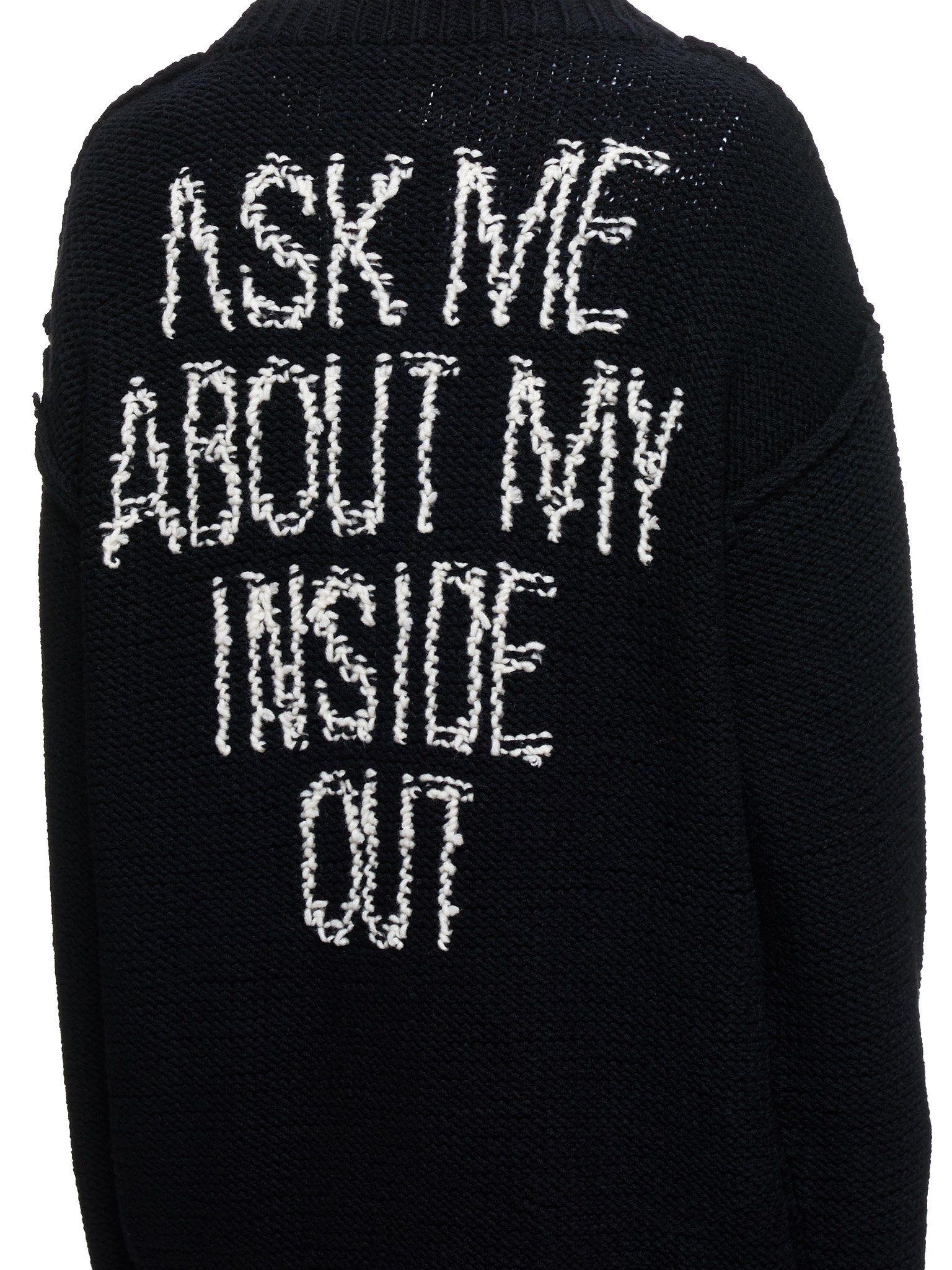 I don’t think well in three dimensions — moving a sofa up or down a set of winding stairs is a nightmare for me. For the same reason, I have a hard time getting my head around knitting. I sort of understand the idea of knit and purl. Like, building a flat area of knit fabric; it’s a little three-dimensional but comprehensible. But then you have to make a sleeve? May as well ask me to synthesize a complex chemical compound with a knife and fork.

So I’m generally blown away by the idea of knitting patterns, a technique that’s been very present in clothing over the last few seasons, especially among higher-concept designers like Raf Simons, Kiko Kostadinov, and Saint Laurent Paris. A recent search of Mr. Porter’s stock yielded 372 results for “jacquard” and 164 for “intarsia,” two methods of incorporating multi-color pattern into a knit. At Put This On, we’re on the record as appreciating knit textures first; if your baseline is a plain wool crewneck sweater, a step toward interest is adding texture, either in fuzz (like a Shaggy Dog) or varied stitches (like a Gansey sweater).

Adding color and pattern — whether it’s concrete imagery, as in a lot of cowichan designs, or geometric or abstract color variation — is bolder, and in some cases, borders on both flashy and corny. Knitting has homemade, folk-y associations, and for a long time knitting pattern was a way of personalizing a sweater or blanket. Some approaches are more subtle and universal, like fair isle or Nordic patterns, and some are very specific, like knitting bowling pins or initials into a cardigan. Vintage examples can be really cool and interesting, and at the same time kitchsy: consider ugly Christmas sweaters (or better yet, don’t). 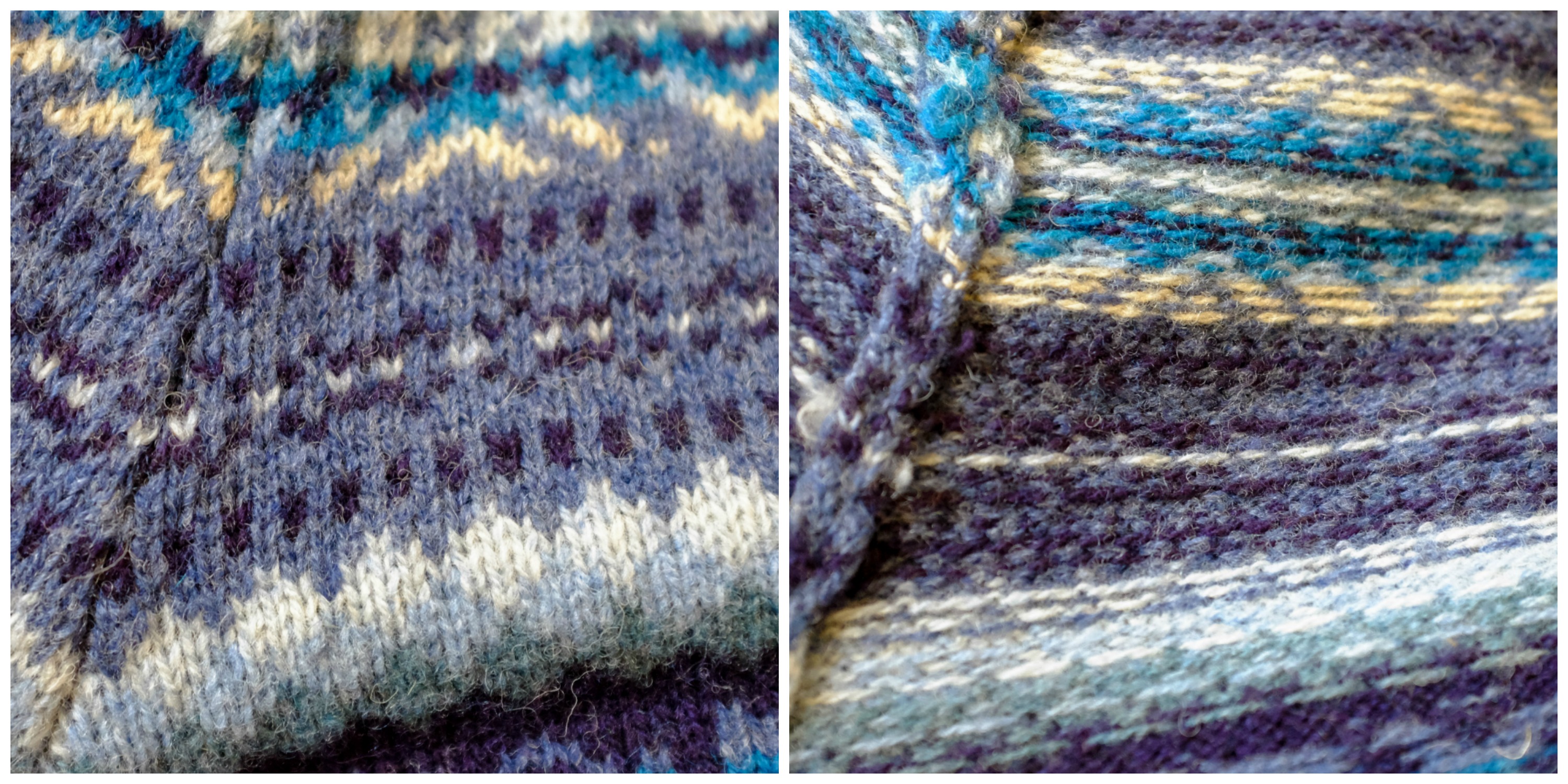 A fair isle sweater pattern and its reverse. Note that yarn is “carried” or “floats” along each row in longer stitches on the reverse where it’s not seen on the outside of the sweater.

Jacquard and intarsia are sometimes used interchangeably to describe a knit with a pattern in it, but there are differences. In jacquard knitting (it’s pronounced juh-CARD, after the French inventor of the jacquard loom), in a given row, when a thread is not used in the face pattern, it “floats” across the back, so that there’s really two layers of thread across the swath of knit fabric. (listen to Avery Trufelman’s Articles of Interest for more on the development of jacquard.)

In intarsia (pronounced in-TAR-see-uh) knitting, different color thread are incorporated in the row only where needed on the face, resulting in a single layer knit, but with some loose ends where colors end. (Check out the Pearl Knitter post for examples of knitting the same pattern using each technique.)

You’ll more often see jacquard in patterns that repeat across large areas of fabric (like fair isle, where you’ll need each color again and again across a row) and intarsia where you may have either large blocks of single colors (like argyle) or alternately patterns where you only need a couple of different colored stitched per row (like a Polo bear sweater, or this nutso Doublet sweater, which has a gruesome face knit in upside down and inside out, so when you pull the front  of the sweater up, the true pattern aligns with your own gruesome face. Happy Halloween.).

Intarsia is derived from an Italian mosaic woodworking technique, like you might see on a decorative box, where different tones of wood are inlaid together to show an image or pattern. 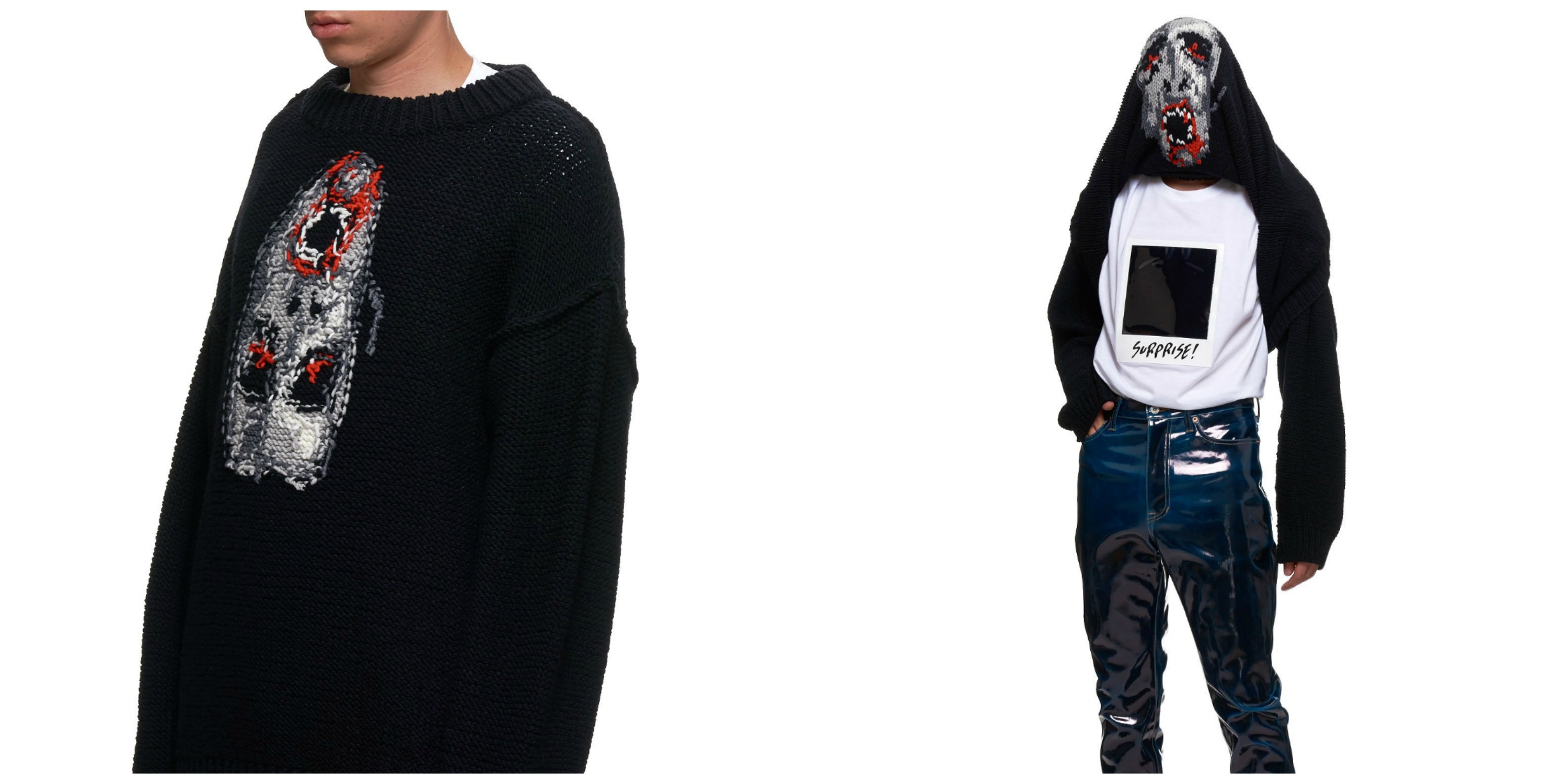 While I hesitate to recommend $1,000 costume knitwear (see also this reversed intarsia roadrunner sweater for $2k), I have seem some cool jacquard and intarsia sweaters this season.