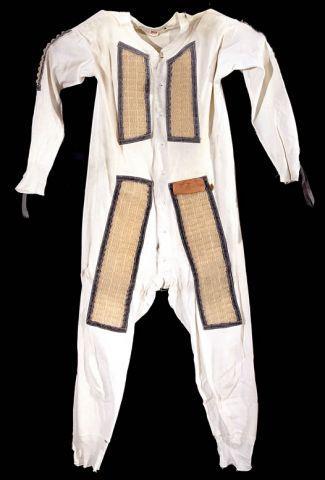 Alyssa Shaw visits the Smithsonian’s Suited for Space exhibition, currently in Philadelphia, and considers the evolution of astronaut undies:

On display in the quirky exhibition are a few different models of spacesuit underwear, including a beige cotton one-piece with coil spacers affixed strategically to allow airflow…. A sketch from 1965 shows the Gemini EV spacesuit with its many layers, the first of which labeled “underwear,” others including “comfort layer,” “pressure bladder,” and “restraint layer.” In the late 1960s, Atlas Underwear Corporations designed the Apollo 11 “biobelt,” a soft layer worn against astronaut’s skin designed to monitor things like blood pressure, but not necessarily designed with the wearer’s comfort in mind. Commander Chris Conrad of the Apollo 12 mission wasn’t a fan of the biobelt. He mused, “It looks like I’ve got poison ivy under these things.”

Space underwear have come a long way since their first use fifty years ago. They still resemble those one-piece men’s pajamas your great-grandfather probably wore, but today’s technology replaces elements like coil spacers. Some of the most recent underlayers are composed of stretchy material that provides the flexibility astronauts need when navigating and working in space. They are typically fitted with cooling tubes and sweat-wicking fabric to keep their body temperatures at a nice medium between the coldness of space and the heat pent up in their tight suits.

It’s July and I’ve already shed all the layers of clothing basic decency and the law allow. Who’s down for some cooling tube underwear? Via Andrew Sullivan.

Filed Under: Space, The Smithsonian, Underwear