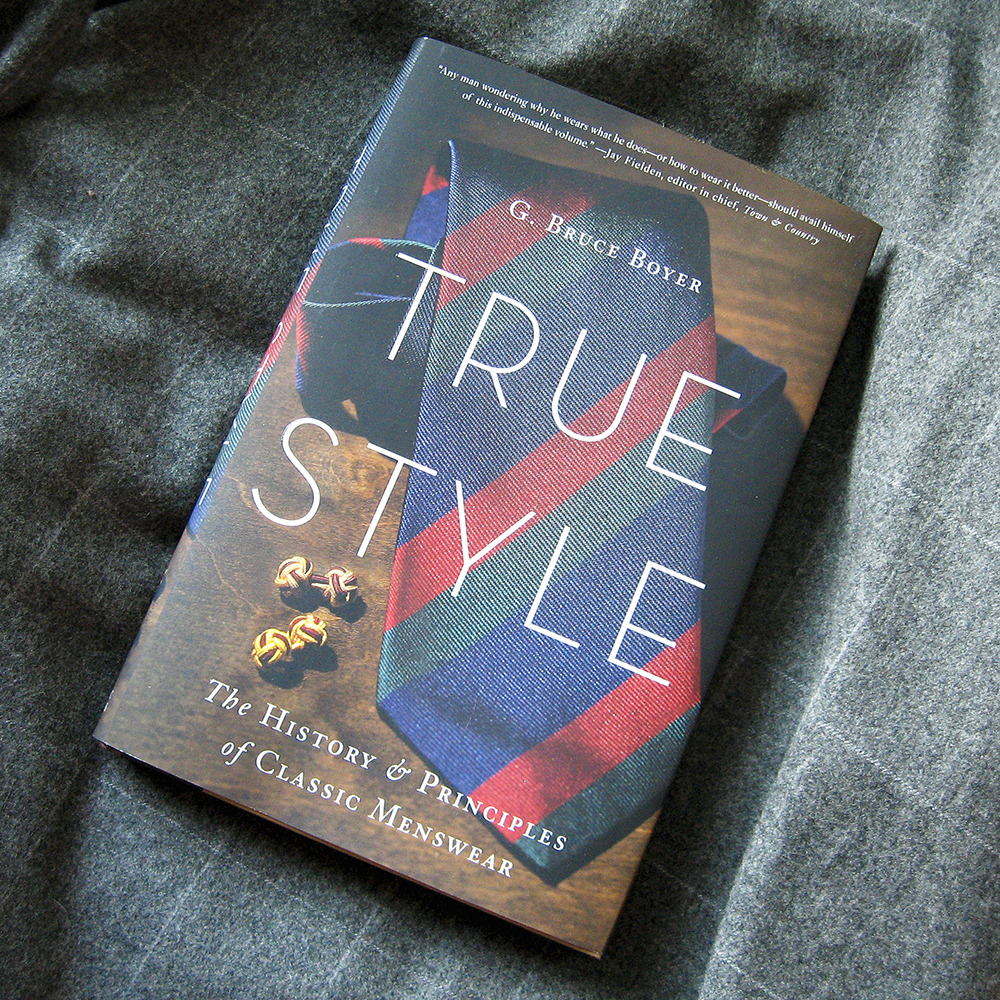 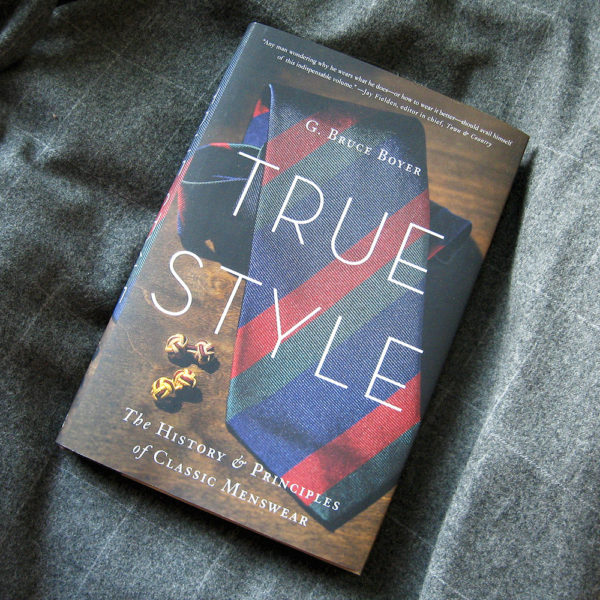 It’s been almost thirty years since Bruce Boyer published Elegance and Eminently Suitable. For a lot guys, including me, these are some of the best books on the topic of classic tailored clothing. Eminently Suitable covers the history of men’s dress and how to put on a coat and tie; Elegance is a collection of essays (mostly from Bruce’s time as the men’s fashion editor at Town & Country).

Bruce’s new book, True Style, is also a collection of essays, although this time taken from the hodgepodge of places he’s written for since he originally penned Elegance in 1985. Each chapter is dedicated to a topic – boots, denim, dressing gowns, suits, Italian style, sprezzatura, etc. There’s even a chapter on something Bruce calls “the shoe-hosiery-trouser nexus.” If that chapter is still up-to-date, we learn here that Bruce almost only wears brown suede shoes (he doesn’t own any black footwear, except for a pair of black velvet Albert slippers that he wears with dinner jackets. For him, black is too puritanical).

The book isn’t about Bruce’s clothing preferences, however, nor is it necessarily a guide on how to put on a coat and tie. Although, when reading through, you’ll pick up things here and there. In his chapter on business attire, he notes that he’s not interested in giving fashion advice about whether you should match your belt buckle to your cuff links (something he thinks falls into “technical advice”), but has found some broader lessons to be true. Under the section titled “Big Mistakes,” he writes:

1. Being too studied: everything all matched up makes the uniform obvious, overly fastidious, and blatantly narcissistic. Individuality should be in evidence, quietly.

2. Wearing too many accessories: like putting all the china on the table at the same time, it’s too busy and signals insecurity. Diana Vreeland wisely said that the key to style is refusal. This is particularly true today, when there is such a plethora of wares before our eyes.

3. Using too many patterns: like an overloaded electrical circuit, the outfit quickly burns out and calls attention to itself. This is not unlike camouflage, in which lines of objects are blurred in order to mislead our eyes away from distinctions we should be making.

4. Being too understated: blandness without indicated blandness within. Unless you’re incredibly handsome – as was Cary Grant, who made the low-keyed monochromatic approach to dress his signature – make a subtle, distinguishing gesture in your attire.

Granted, not ground-breaking information, but whereas other advice sometimes keeps guys looking too stiff and rule-bound, the above are general axioms always worth remembering.

Most of the book, however, is about Bruce’s observations on social history and clothing, how trends intersect with movies and popular culture, and how what we wear has evolved. In his chapter on boots, Bruce connects styles such as the engineer and work boot to the rise of working-class, rebel icons, such as Brando in The Wild One and Dean in Rebel Without a Cause. Another chapter on the “English Country House Look” nicely encapsulates a certain, well-worn, Old Money style that we’ve all admired. The idea, he writes, is to “give the impression that strata of taste have been laid down over years by successive owners and its crowded incongruities are the result of collective history.” That means always favoring the old over the new, and never looking too prepared. “Obvious coordination is to be avoided at all cost,” he writes. “Ties, socks, and pocket squares should slightly clash at the very least. Wearing clothes from different genes – or different periods or occasions – is helpful. Town and country often meet in the truly assured.”

There are dozens of new titles every year on men’s clothing. About half of them are just rehashed press releases; the others give the kind of tips-and-tricks you see everywhere online and in magazines. Bruce’s work has always been worth reading because he’s one of the few authors who deal with genuinely classic style, but in a way that doesn’t feel like it’s just about rules. True Style is a great read for guys who find joy in clothing, but aren’t necessarily looking for an instruction manual on how to dress.