Not long ago, synthetic fleece represented what men did not want in their clothing. It was as comfy, middle-aged, and suburban as a minivan. Not even a cool minivan; fleece was the Dodge Caravan of fabric. And no one wants to be seen in a Dodge Caravan. At a time when men were rediscovering the clothing of their grandfathers’ generation, natural fabrics and heritage cuts were the rule menswear, from tailoring to everyday casual wear, the thought being “What was so bad about cotton and wool? They’re comfortable, warm, and served us for hundreds of years before we went all space age.”

We’re fans of that sort of thinking–I often refer back to Archival Clothing’s resolutions, one of which is to wear wool and linen year-round. Part of the enjoyment of getting into men’s clothing (or any clothing) is discovering, taking inspiration from, and wearing clothing traditions that pre-date you. Maybe because the original fleece boom now significantly pre-dates people born in the mid 90s (and even the mid 80s), fleece has crept back into the conversation, and in the last year, it seems to be everywhere — from the usual outdoorsy sources like Patagonia and LL Bean to Antonio Ciongoli’s post-Eidos 18east collection to Engineered Garments’ weird cousin, Needles.  So what is fleece, and is it for you?

Patagonia gets most of the credit for the modern fleece jacket. In the 1970s, Yvon Chouinard’s company was looking to innovate in insulation for rock climbers and backpackers. Traditionally, these beardies wore wool sweaters, which worked well and looked great. But for obvious reasons, lighter, less absorbent fabrics would perform better. In his book, Chouinard cites as inspiration “a staple of North Atlantic fishermen, the synthetic pile sweater”–I can not for the life of me figure out what he’s talking about. If you know a North Atlantic fisherman from the 1970s or earlier, let me know.

In any case, Patagonia designers found synthetic pile at a fabric outlet (“pile” refers to fabric with loops, strands, or tufts of yarn standing up; some old military jackets are lined, for example, with woolen pile). Allegedly, their initial sweaters were made with stiff-backed polyester fabric intended for toilet seat covers. They worked with Malden Mills (which specialized in fabric for infant clothing known as “bunting”) to develop a friendlier version, and the Patagonia fleece was born. Malden Mills become Polartec, and thick, synthetic pile sweater soon became the outdoor standard for midlayer insulation. 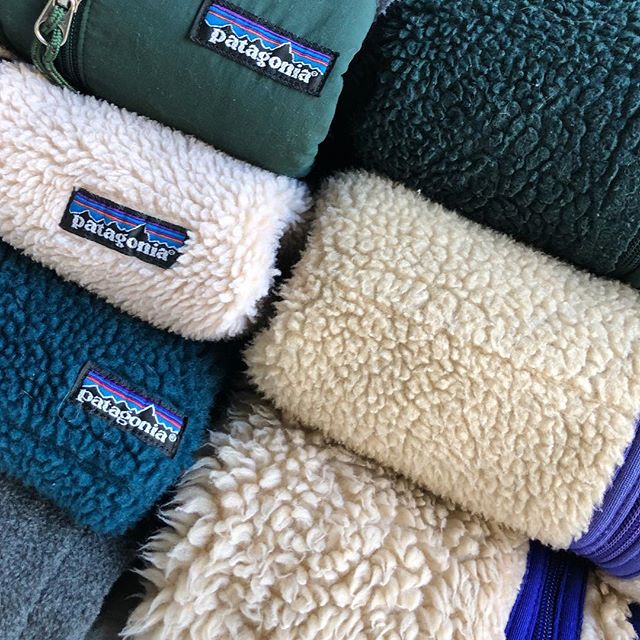 Fleece collection from one of my favorite Instagrams, The Daily Obsessions.

Patagonia refined their fleece in the 1980s, adding bright colors and eventually patterns in the line to help them stand out from the competition, changing the texture of the fleece from hairier deep pile to finer fleece they called Synchilla, and making the sweater easier to put on with their snap-T design in 1985.

If you, like me, grew up in the 1990s, you associate fleece less with backpacking and more with the general performancification of casual clothing. The same general drive that put our moms in crinkly teal track suits and dads in bright ski jackets also encouraged everyone to wear fleece jackets as an outer layer, which, especially when they were cheaply made, seemed to have little real practicality. Fleece is light and not at all wind or waterproof. (The “right” way to wear it in cold / wet conditions is over a base layer and under a wind/water resistant outer layer–the fleece is insulation.)

In the 1990s, it seemed every mainstream/mall brand was making a synthetic fleece sweatshirt or jacket. GAP, Tommy Hilfiger, Old Navy. I had a sweet America by Perry Ellis fleece, which went great with a steel ball necklace and baggy jeans.

After reaching saturation, fleece became a punchline. Inexpensive and shapeless, it was an ideal garment for corporate personalization, in basic colors embroidered with your accounting firm’s name. It cemented its status as a fabric not for performance, but for total laziness, with the advent of the Snuggie, the microwavable-dinner-for-one of personal insulation.

In 2014, a Portlandia sketch depicted gear-obsessed couple Kath and Dave overwhelmed with wonder after discovering a fleece outlet. To me, that marks the low point in fleece’s relationship with culture. The cool kids, it seemed, were so over fleece, it was primed for a comeback.

Given that nostalgia/retro fashion moves in semi-predictable cycles, maybe it was obvious. Adam Gopnik’s theory of nostalgia is that it runs in 40-year cycles. 40 years ago would be the late 1970s; prime time for performance fleece. Always a vintage outdoor gear enthusiast, Mordechai Rubenstein was posting on Mister Mort about fleece as far back as 2008.

Magazines like Japan’s GO OUT, which is like Outside magazine for people who are afraid of getting wet, glorified the sort of retro outdoor gear from the 70s that a vintage fleece jacket from REI or Patagonia exemplified. Stylewise, they slot in nicely next to other gear that trickled into the mainstream–60/40 jackets, down jackets, Cordura backpacks, etc. 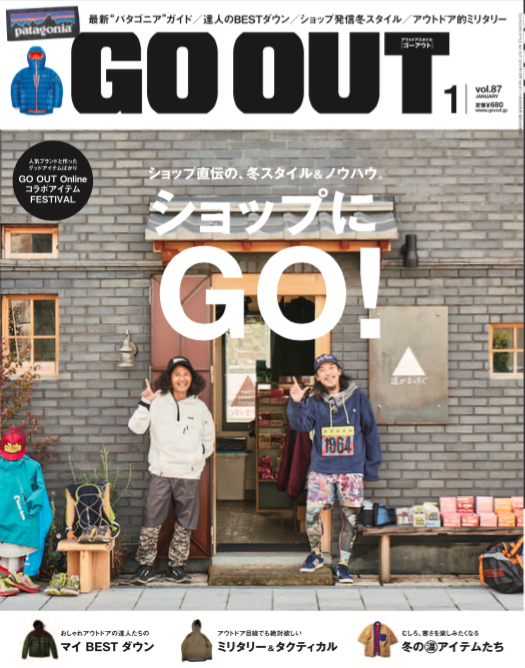 And Patagonia, for which fleece jackets have always been a big seller, reissued retro versions of its fleece jackets, including deep pile, teddy-bear style fleeces. Arguably, they still do it best, although they now have separate categories for “casual fleece” and “technical fleece.”  I admit it’s a little bro-y, but I still love their retro-x jacket. 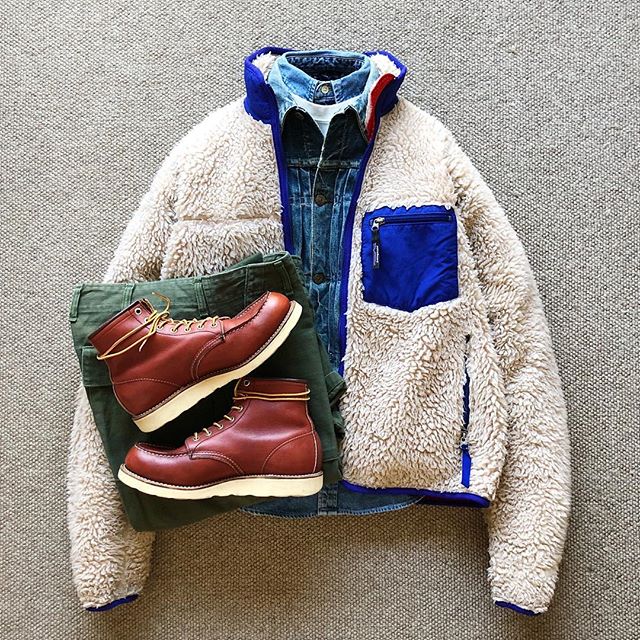 But fashion has recently taken it beyond post-heavy-duty-Ivy style, and people seem ready. 18East’s ivory fleece and block-printed fabric sold out immediately. Uniqlo and Christophe Lemaire made a nice jacket with an oversized collar. Haberdashers like H. Stockton and Sid Mashburn are selling it. It’s the backbone of designer Sandy Liang’s collection.  Streetwear brands like Cav Empt and Supreme have done versions (Supreme’s logo flip Patagonia fleeces are among the brands most sought after collector’s items). Kapital has done different versions; even a vest, the bro-iest fleece silhouette. 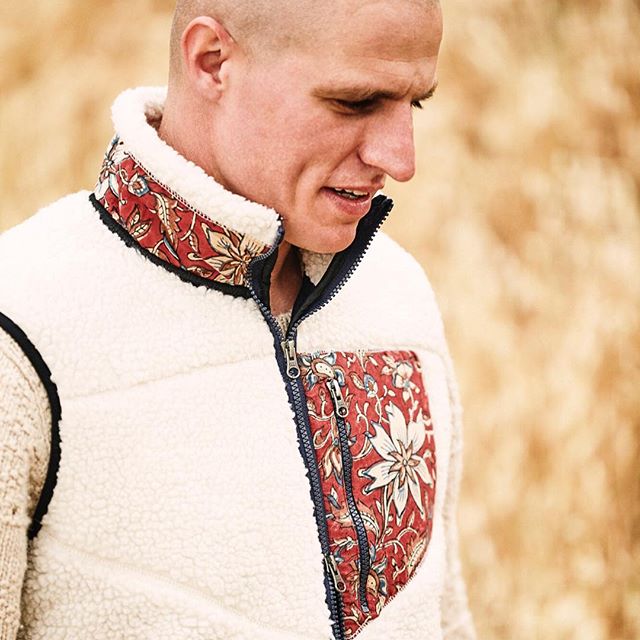 18East’s version is made in India and uses traditionally printed fabric to offset the fuzz. 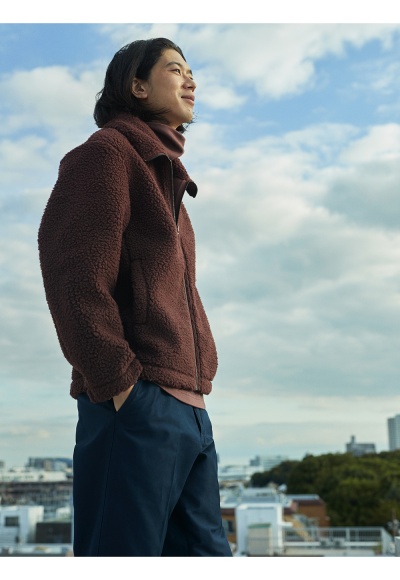 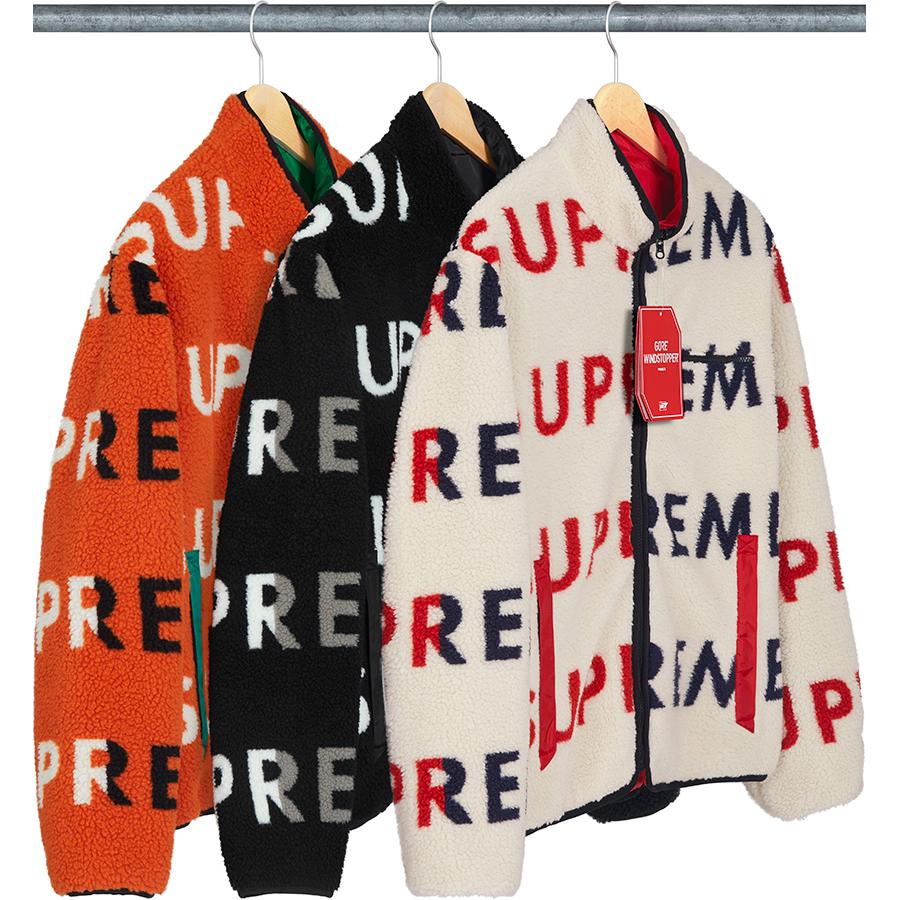 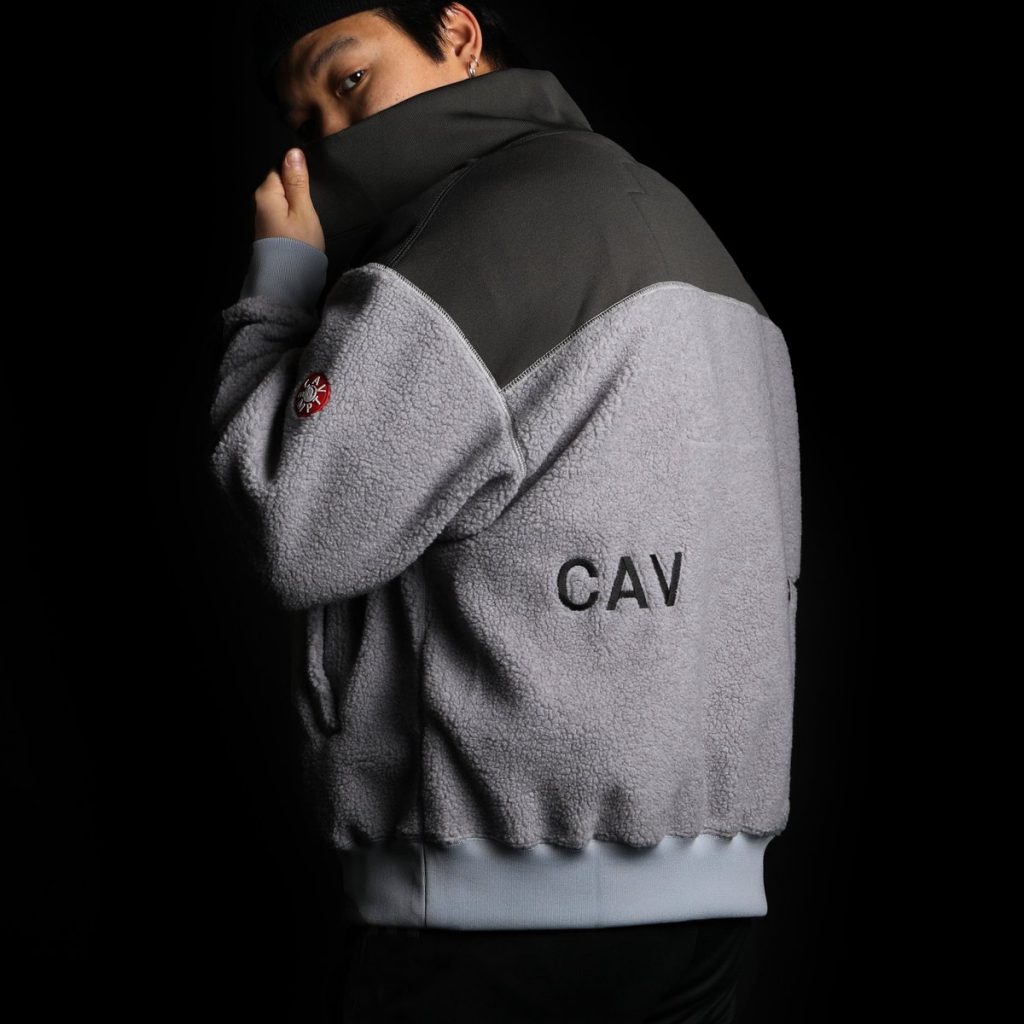 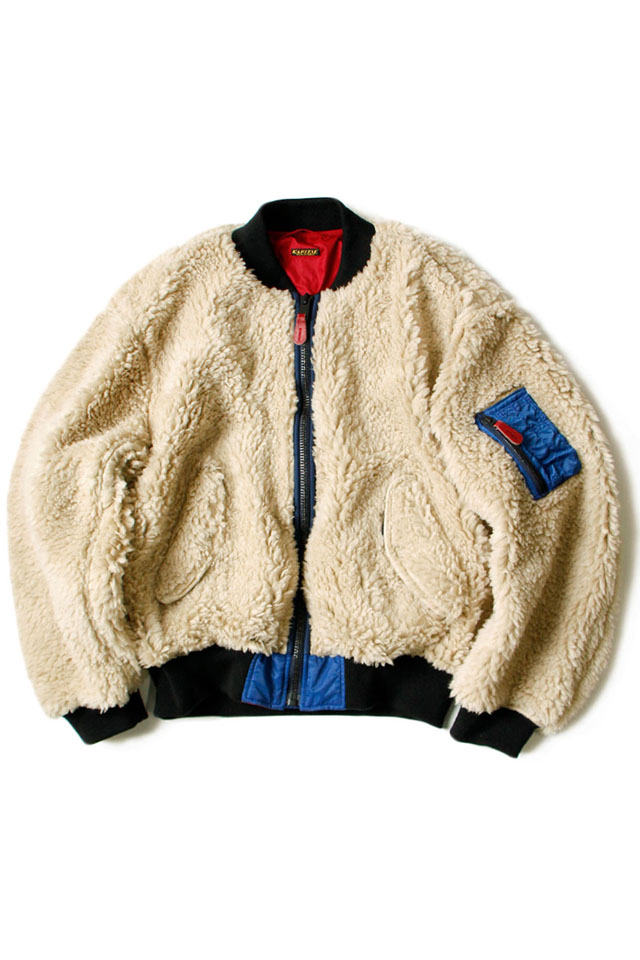 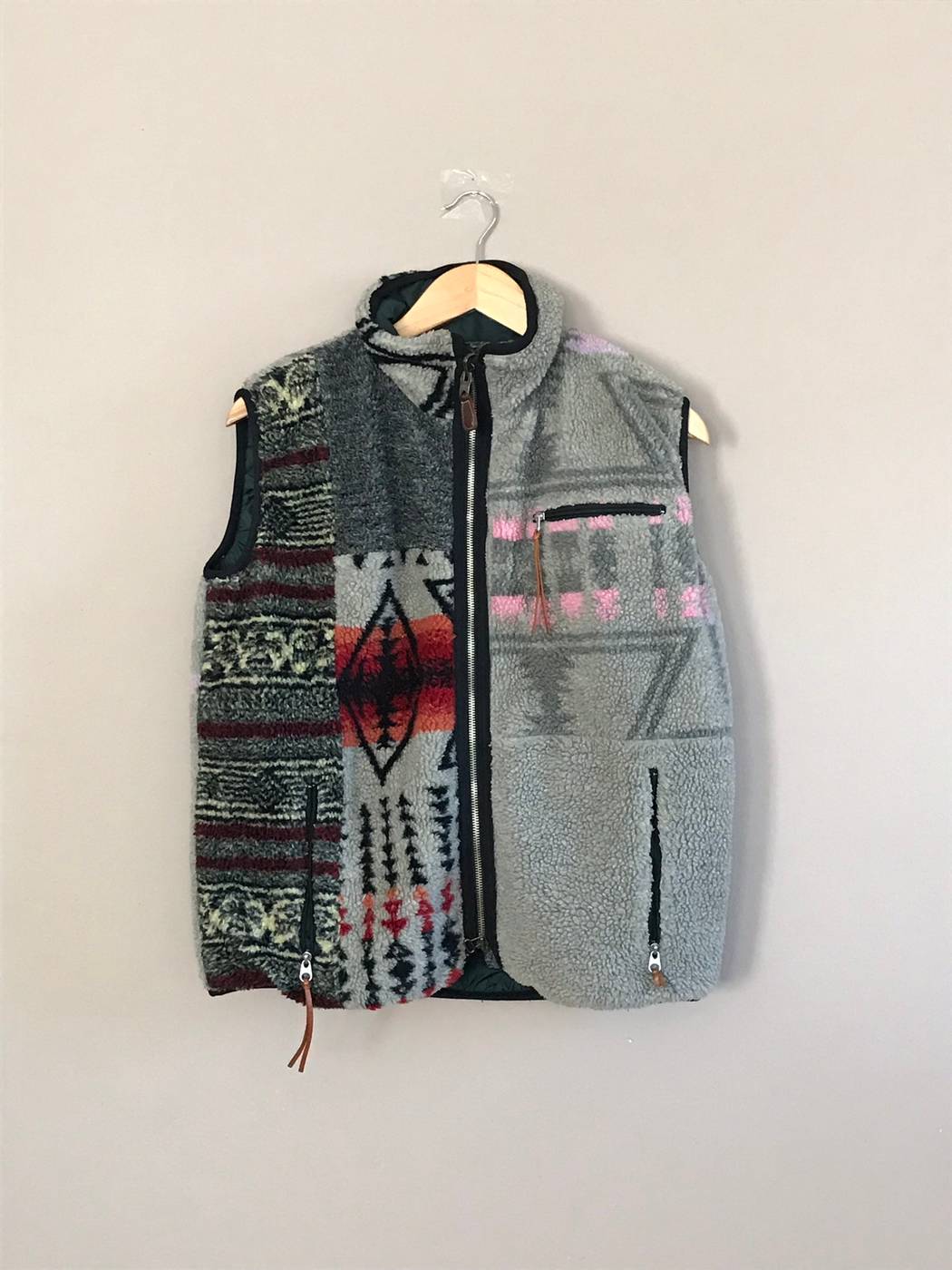 A jacket and vest from Kapital. 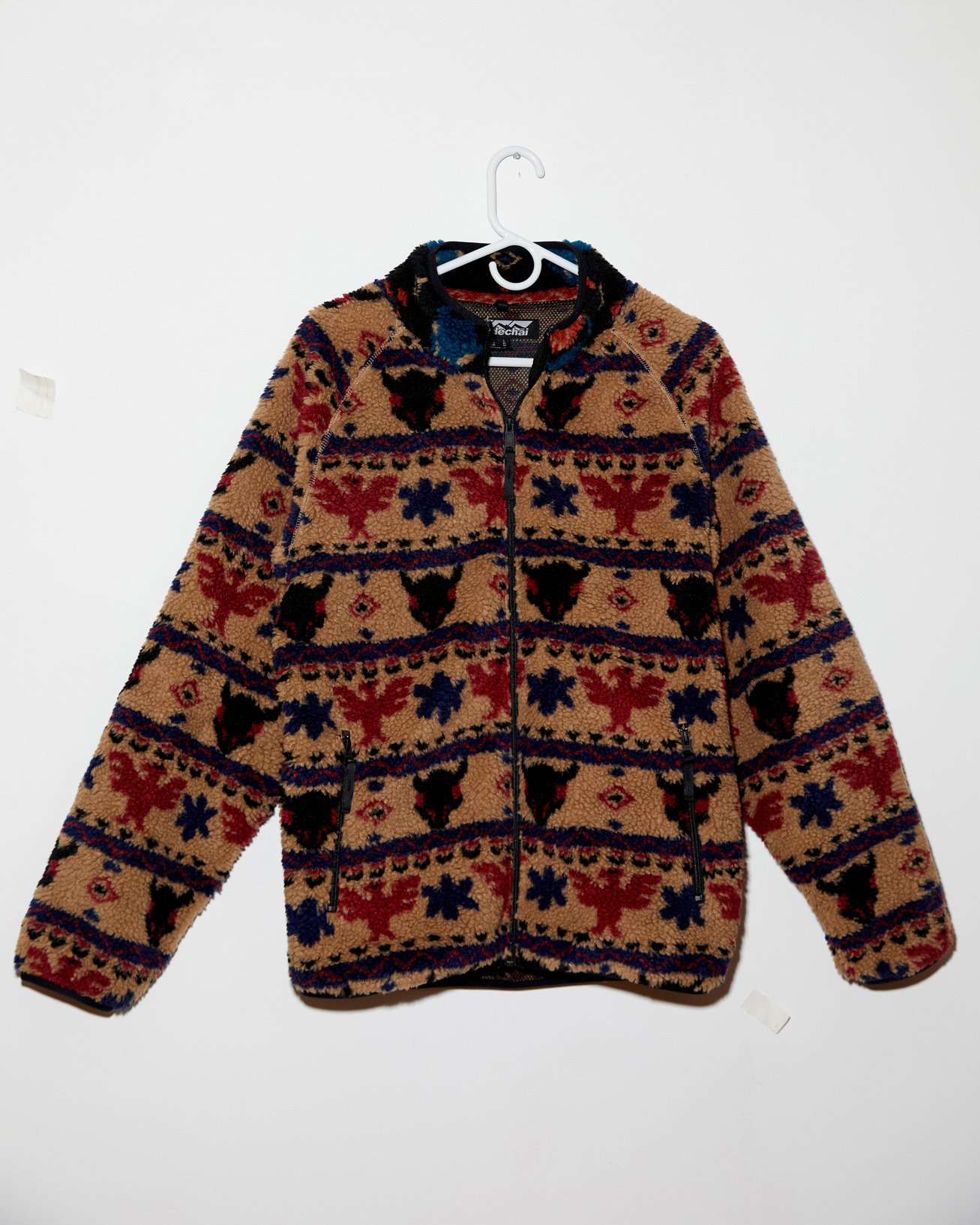 A collaborative effort from Manastash and Mordechai Rubenstein.

The fleece comeback makes sense in a few ways, in addition to the cyclical factor: first, it fits in with the trend of “ugly” fashion over the last few years — see also Birkenstocks, chunky sneakers, etc. These jackets are associated not with elegance and refinement, but with goofiness, bagginess, and comfort. Choosing to wear one, when you could wear a more flattering jacket, is a statement of purpose. Second, there’s the appeal of the fuzzy. Like casentino wool or heavily napped flannel, there’s a coziness to a (quality) fleece fabric that just–feels nice. Like being wrapped in a teddy bear’s arms. Or a Snuggie.