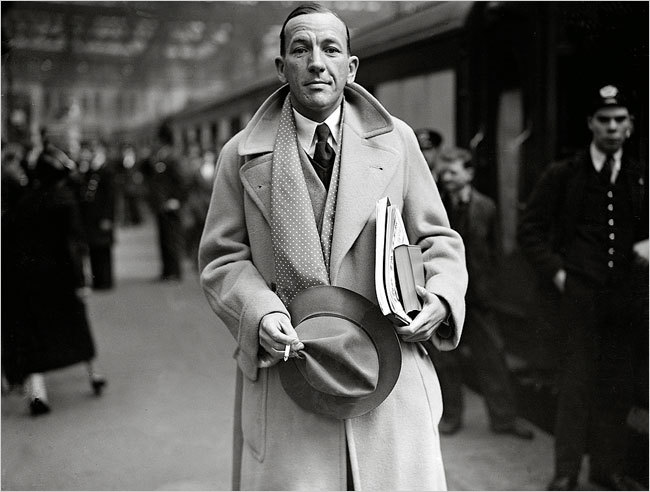 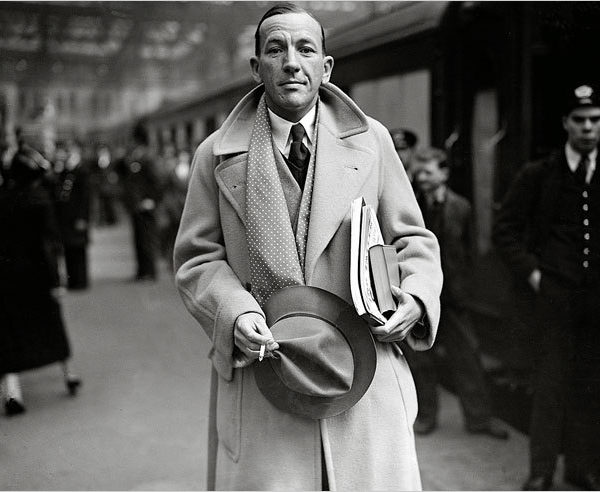 If you’re wearing a wool coat this winter, consider pairing it with a silk scarf. Silk scarves aren’t as versatile as ones made from cashmere or lambswool, but they look amazing when worn with heavy dress coats. By that I mean things such as polo coats, Ulster coats, and Chesterfields – the kinds of things that you sometimes see labeled as “dress outerwear” in places such as Brooks Brothers. It’s just another way of saying outerwear that’s dressier than things such as parkas and leather bomber jackets.

A silk scarf can really soften up the look of a heavy wool coat. See Noel Coward above or Gordon Gekko in this scene from the movie Wall Street. In both cases, their scarves in lend a nice sheen to an otherwise matte ensemble. It’s not unlike how we use silk ties and polished shoes to counterbalance the flatness of a wool sport coat or woolen trousers. As I wrote earlier this year, I believe a lot of what it means to dress well is learning how to strike a balance between different elements of what you’re wearing (patterns, texture, hardness/ softness, sheen/ flatness, etc). Light silk scarves do that well with heavy wool coats, so long as the coat is as dressy as the scarf.

There are a few places to buy a silk scarf. My favorite is Drake’s, who sells them in a few different designs. I have two of their reversible dotted tubular scarves – one in navy and one in brown – which kind of look like this, but without the fringed ends. A navy dotted silk scarf is arguably the most versatile version you can buy, though I like my brown one for when I wear navy coats. The difference in color helps distinguish it from the rest of what I’m wearing.

You can also pick some up from traditional men’s haberdashers, such as Ben Silver, Brooks Brothers, J. Press, Paul Stuart, and A Suitable Wardrobe. Additionally, San Francisco’s Wingtip stocks Edward Armah silk scarves, as well as a few under their own house label. You can also buy Edward Armah’s scarves directly from Edward Armah themselves.

Admittedly, all those are quite expensive. You could wait for them to go on sale, but they’ll still be on the pricey side. Alternatively, KJ Beckett sells silk scarves by Michelsons of London (also available through the manufacturer themselves), but I have no first hand experience with their products, so I can’t speak about their quality. You can also try eBay. This seller, for example, regularly stocks them, but his/ her scarves are often short and narrow. That’ll limit how you can wear the scarf. You may be able to get away with wearing it like a muffler underneath your buttoned up coat, but it may look silly if you try anything else. Better if you can get something 64” or longer, but those will typically cost you considerably more.