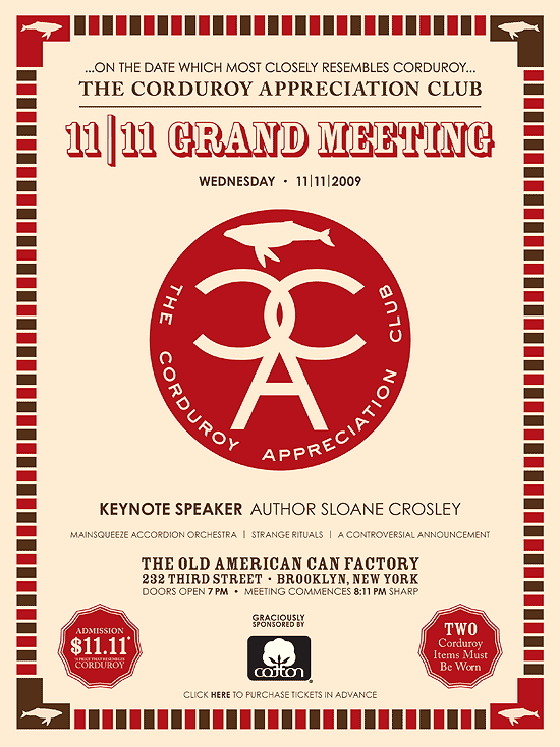 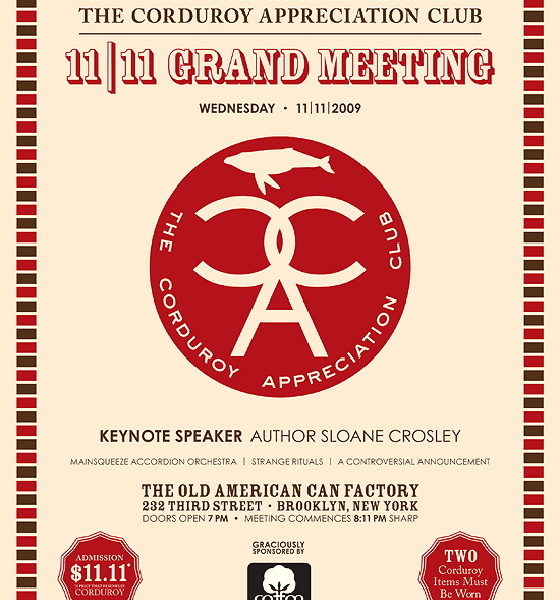 The annual meeting of the Corduroy Appreciation Club is fast approaching, and so I thought I’d share a brief interview I conducted a few years ago with the club’s founder, Miles Rohan, for MaximumFun.org.  Note that this year’s special guest speaker, Sloane Crosley, was a guest on my public radio show last year, and was immensely charming. And yes, I do own a corduroy suit.

Miles Rohan always wanted to start a club. Also, he really liked corduroy. So he started a Corduroy Appreciation Club, with cocktails, speakers and secret rituals, to meet every year on 11/11 – the date most resembling corduroy.

Do you really like corduroy, or clubs, or both?

If I’m not wearing at least one piece of corduroy, I don’t feel right. The repetition, the parallel lines, the thickness I’ve always thought, provided a kind of order and support. And because I’m not entirely the most orderly person, it helps. But even when I was little I loved corduroy. It made me feel grown up and sophisticated. I’m more of a pin wale person, but at times I love a nice wide wale.

I like the idea of old social clubs, like The Elks and The Moose Club quite a lot. More secretive groups like The Masons or Skull and Bones have always fascinated me. That’s what the Corduroy Appreciation Club is based on, old, mysterious social clubs with secret symbols, mottos, handshakes and the like.

Do you have officers?

There are several people who help a great deal with the Corduroy Appreciation Club. I had tried to get it off the ground for a few years, but just couldn’t. My wife, Jordana, is beyond helpful and was integral to the eventual launch. She’s a graphic designer and was able to articulate much of my ideas about aesthetic for materials like our corduroy swathed membership cards. Beyond her, many friends have been incredibly helpful and supportive. We have a Vice President, a Director of Operations, a Corduroy Social Council Chair, and several “Cord-inators.” We have a new president of our UK Chapter.

What if there was a club chair made of corduroy? It’d be a nice chair, and perfect for meetings or social occasions.

That’s a marvelous suggestion. Like a corduroy throne? As we expand I think that each chapter should have one. I know The Masons have special chairs. We have plans to actually have a clubhouse or lodge by November 11th, 2011. 11/11/11, the date which most resembles corduroy—ever. And the place would be essentially made of corduroy, corduroy covered walls, furniture, rugs, and lampshades…everything corduroy.

Your rules state that you must wear at least two items made of corduroy. Unless you’re wearing a corduroy suit, isn’t that a little odd?

I don’t think so. People seem to like the challenge and the serious nature of the rule. People wear corduroy hats or skirts, many women have corduroy purses. The rules encourage creativity. People have come to meetings with homemade corduroy headbands, shoes, necklaces, ipod cases. Some claim to have on corduroy underwear, but I’ve just taken their word, I’ve never checked. We’re having official Corduroy Appreciation Club Corduroy Ties made up for purchase.

Our most prominent and public club symbol is a left-facing whale, which is a pun on wale. Wales are the raised ridges which make corduroy, corduroy. Whales also poses longevity, sociability and intelligence-all attributes the CAC wishes to aspire to. We have a complex system of numerology based on the number 11 because it’s the first natural number to resemble corduroy and is therefore extremely important to us. The Hendecagon, an 11-sided polygon figures prominently. Our secret rituals cannot be divulged here or anywhere. Members face dismissal if they are found to betray the Loyal Corduroy Oath.