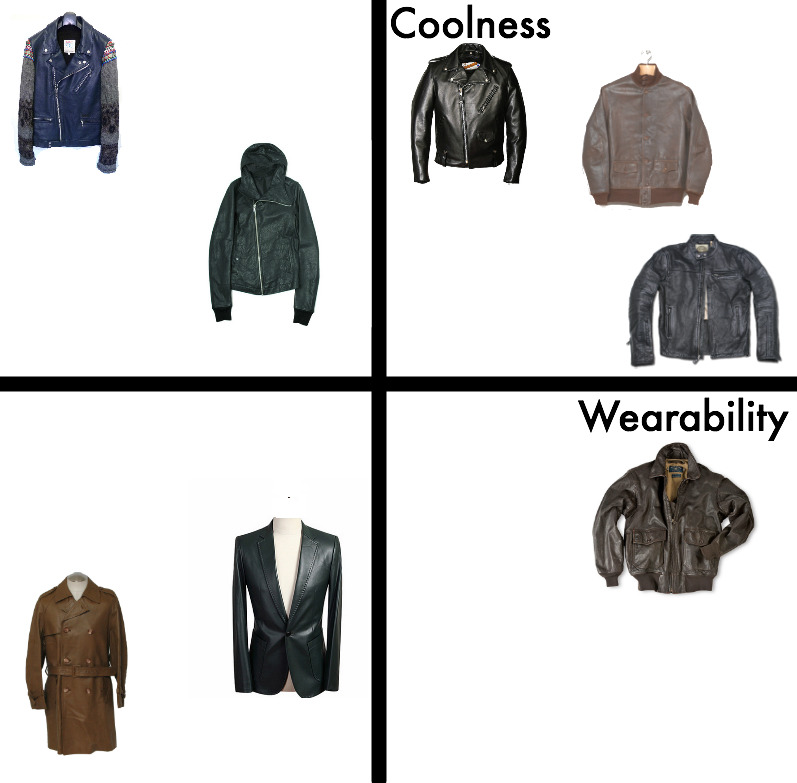 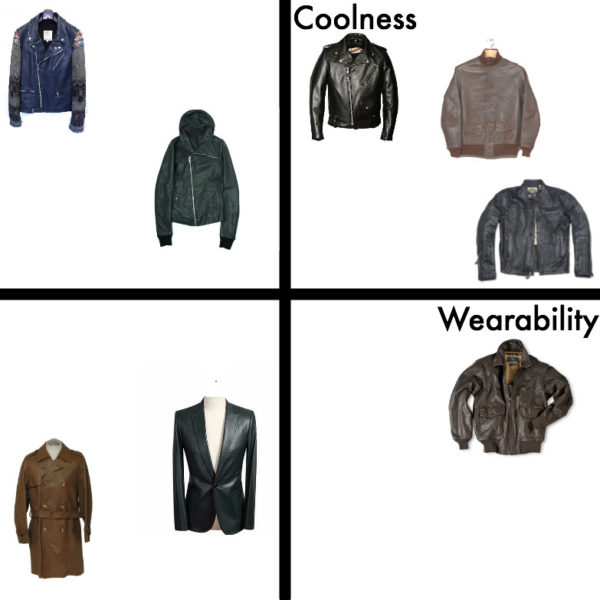 After Derek wrote about vintage leathers yesterday, we joked about dressing appropriately for your personality–that is, what if you look like a dork? Leather jackets seeped into casual men’s wardrobes by their association with specialized, hide-bustin’ activities like racing motorcycles or piloting jet aircraft, and although today they’re socially acceptable for everyone from rebellious teens to cool uncles, some jackets will make you feel like a poseur and probably look like one, too. The matrix above plots some well-known leather jacket designs on axes of how cool they are right now vs. how wearable they are for the average guy (like most people, I see myself as a reasonable average, which is both absurd and somewhat valid). In approximately clockwise order:

1. Undercoverism knit sleeve biker jacket–A typical “grail item” of internet hype hounds, this jacket looks fantastic on a hanger but is probably best left there. It presaged the recent trend of remixing garment archetypes. It was made for Undercover’s fall 2009 season in a range of sizes, from XS to S.

2. Rick Owens scuba jacket–Here’s your Put This On Rick Owens reference of the day (if I were Jesse I’d be courting Rick as a sponsor). Asymmetrical cuts and intentionally overlong/bunchy sleeves put most Ricky O out of the comfort zone for a lot of men.

4. Eastman Leathers A-1–The A-1 is a no-nonsense classic leather jacket that fits and flatters a lot of builds. You don’t have to ride a bike to back it up, and it matches favorably with denim or dressier stuff.

5. Schott cafe racer–A biker jacket with fewer baubles, plus the word cafe which just seems soft. Slipping down the cool scale in favor of the Perfecto recently.

7. Leather sportcoat/blazer–A favorite of film wardrobe managers when they want a character to look a little sleazy, like Ray Liotta in Goodfellas or Steven Seagal in pretty much any Steven Seagal project. Union Made recently brought it back for their Golden Bear collaboration, which, OK.