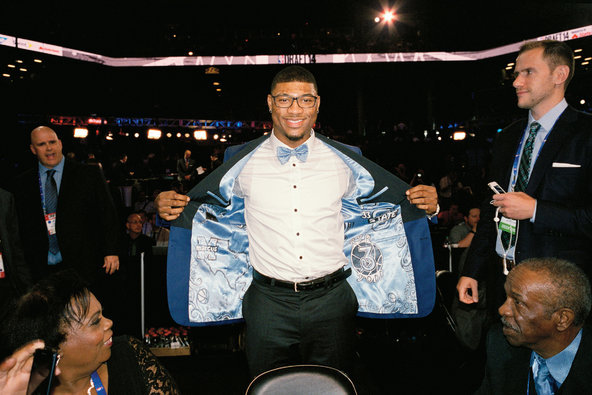 The story Sarah Lyall was researching in August on the NBA’s Rookie Transition Program was recently published:

The league has a “business-casual” dress code, a look foreign to most of the rookies, whose closets are full of jeans and sweatpants. Every gentleman should have a peacoat, a raincoat, a varsity jacket and an overcoat, she said; also a blue suit, a gray suit and a black suit. Cargo pants are versatile and can be dressed up to look fancier than they are. You can mix and match; the navy jacket will look just fine with the black pants. Do not use the same Irish Spring soap on your face that you use under your arms. When you leave the house, throw on a classic watch and your signature fragrance, and assume that you are being observed at all times.

Can’t say I agree with the RTP’s recs now, but the advice would have served me well at 19 years old. Pictured is Marcus Smart, 6th pick in the 2014 NBA draft and current Boston Celtic. On draft night he paid tribute to Oklahoma State, his native Texas, his mother, and late brother via a custom printed jacket lining. Photo by Eric White.