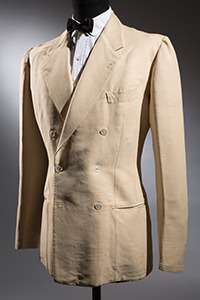 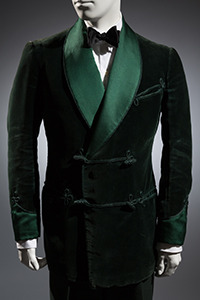 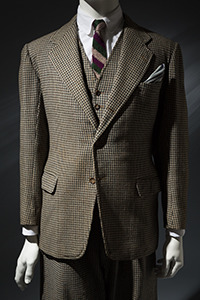 I swear, New York City seems to get all the awesome menswear-related events. Sample sales, tradeshows, and really, really fantastic exhibits like this one.

The Museum at FIT (the Fashion Institute of Technology) is holding a special exhibitions gallery from February 7th until April 19th on the fashions of the 1930s. That’s the decade that’s most often considered the “Golden Age” for classic men’s style, and the single most influential time for how we think of classic men’s dress today.

The exhibit will feature both men’s and women’s clothing, and have a number of outstanding examples of bespoke tailoring from that period. Seen above? The first is a cream jacket from Rubinacci, a tailoring house in Naples, Italy. It’s made from tussah silk, which is a textured material somewhat like the nubby stuff we see advertised today as “raw silk." This was considered to be a very aristocratic cloth at the time in Naples. The man who made the jacket was Vincenzo Attolini, a Neapolitan tailor who’s most often credited with having invented the soft shouldered, "deconstructed” Neapolitan cut. It is a style that today has defined Neapolitan tailoring.

The smoking jacket you see in the middle was made by Gardner and Wooley. It was tailored from green velvet and satin. Gentlemen used to wear these at home when they were smoking tobacco (usually in the form of pipes or cigars), or just when they were lounging about, entertaining guests or hosting semi-formal occasions. The jacket’s purpose was to prevent smoke or ashes from getting onto the wearer’s business clothes or formalwear.

Finally, the three-piece suit you see at the end was made by Anderson & Sheppard in London. It’s difficult to tell from the small photo, but if you look closely, you can see the chest is cut a bit full. Notice how there’s extra cloth that “drapes” vertically near the armholes? This is what’s known as the “drape cut,” a style that was invented by the Dutch-English tailor Frederick Scholte and then popularized by Edward VIII (better known to some as the Duke of Windsor). Scholte later passed his technique on to an apprentice named Per Anderson, who of course is the “Anderson” in Anderson & Sheppard. It may interest some readers to know that the drape cut was also the precursor to the zoot suit, which was a style deeply embedded in both jazz music and racial politics in 1940’s America. Many may be familiar with the history of the Zoot Suit Riots.

Anyway, as I was saying, the exhibit opens next week. It was co-curated by Bruce Boyer, a remarkable menswear writer (having penned some of my favorite books, such as Elegance and Eminently Suitable) and a previous guest in our video series. I’m deeply sad I’m not in NYC and thus won’t be able to go. On the upside, there’s a book being released that will give a more in-depth study of the clothes featured. I’ve already put in a pre-order.