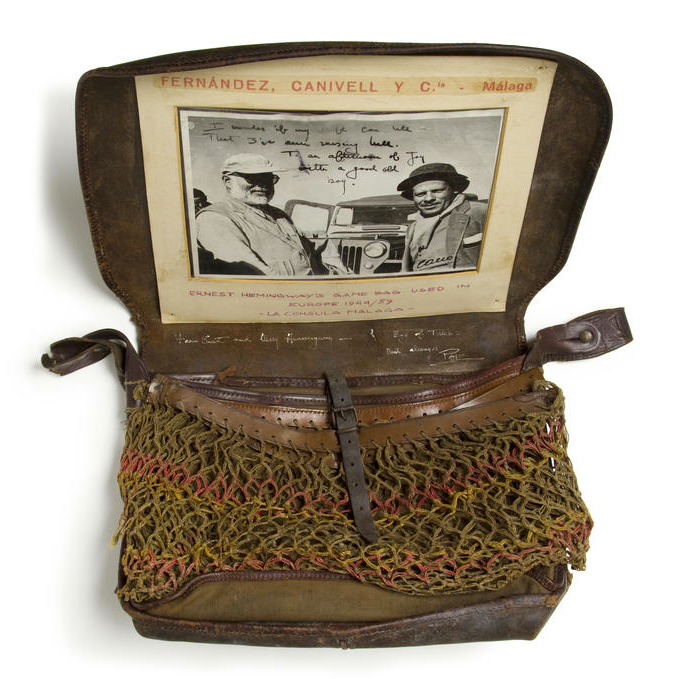 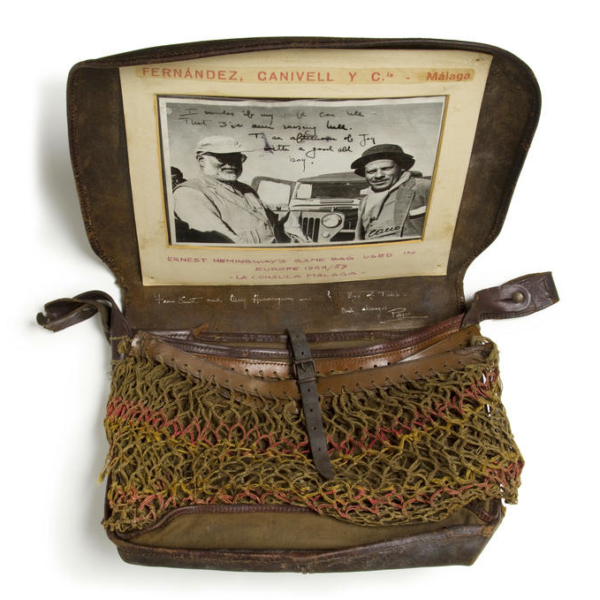 Every once in a while, Jesse and I will list a fishing or game bag in our eBay roundups. Nice ones are made by companies such as Brady, Hardy, and Chapman, and we think they make for nice bags whether or not you go hunting. I have a fashion brand’s interpretation of a fishing bag, for example, and use it to carry my laptop, books, and papers when I go to campus.

Above is Ernest Hemingway’s personal game bag, which was recently sold at auction through Bonhams. The description reads:

HEMINGWAY’S GAME BAG, inscribed under the flap in white ink “From Ernest and Mary Hemingway — Bag of Tricks, Best Always, Papa.” The photograph is also inscribed by Hemingway, “I wonder if my wife can tell / That I’ve been raising hell. / To an afternoon of Joy / With a good old boy,” and signed by the unidentified recipient (“Cano”?). A printed headline on the matte reads “Fernández, Canivell y Cia. Málaga,” and a crayon inscription “Ernest Hemingway’s game bag used in Europe 1944/59 – La Consula, Malaga.”

In 1959, Hemingway made his penultimate trip to Europe, in part to add an epilogue to Scribners’ new edition of Death in the Afternoon (first published in 1932), but also to research a series of bullfighting articles commissioned by Life magazine. He stayed at La Consula, the estate of an American, Nathan (Bill) Davis, who happened to be the brother-in-law of Cyril Connolly. Hemingway briefly returned to Spain in 1960, to be photographed for the cover of Life.

According to Field & Stream, the inscription was made to one of Hemingway’s closest friends, Charles Thompson, “the owner of a marine hardware store in Key West and the inspiration for the character ‘Old Carl’ in The Green Hills of Africa.”