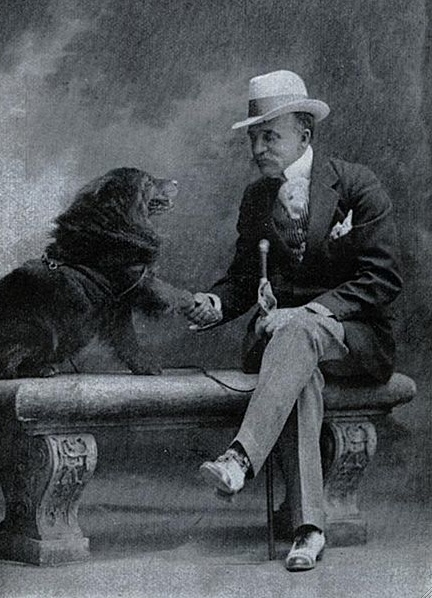 In the annals of menswear there’s the legend of Evander Berry Wall. Wall was brought up in a fairly privileged, gentry-class family, but his lifestyle really took on certain grandeur after he inherited $1.5 million in 1880 (the equivalent of $33 million today) from his grandfather when he was only 20 years old. This allowed some remarkable extravagances. For example, after inheriting his fortune, he’s said to have never drunk water, only champagne. Most of his money and time, however, went to clothes, from which he built quite a reputation.

Wall was known to own over 500 trousers and 5,000 neckties, and he dressed in extraordinary colors. For example, in the image above, he was wearing a reddish, havana brown dustcoat, grey shepherd check suit, and a brightly striped vest. His shirt was striped in red and sky blue, and it had a very high collar made from a contrasting pattern. His tapered trousers ended in a big turned up cuff, so that he could show off his highly varnished lavender spats. This was all accented with a widely spread cravat, bright pocket square, and beautiful cane that he always kept with him.

He was known for having custom made cravats, collars, and ties made for him by Charvet. Matching pairs were also made for his dog, Chi-Chi, who wore the items when the two dined together at the Ritz. He was also renowned for his patronage of Henry Poole & Co., commonly considered the most prestigious tailoring house on Savile Row. Wall said that any man not dressed by Poole was “the sartorial equivalent of Happy Hooligan."

This is all background, however. There are two legends I wish to tell you about – The Battle of Dudes and The Wager.

The Battle of the Dudes

Though Wall enjoyed a reputation for being a dandy through most of his life, he became truly famous when a reporter named Blakey Hall featured him every week in the New York American. The feature was quite popular, and consequently, Wall became a bit of a public figure.

One of the journalist’s rivals decided to take advantage of the buzz and promote his own "sartorial race horse” – actor Robert Hilliard, who was another flashy dresser. Each week, the Wall and Hilliard tried to eclipse each other in sartorial extremes as they were featured in the competing newspapers. This was known as The Battle of the Dudes (dude being a term for a well dressed, city dwelling gentleman).The battle is said to have ended in the Great Blizzard of 1888, when Wall strode into the Hoffman House bar in gleaming patent leather boots that went up to his hips. The battled ended with that one grand display of custom boots and he was thereafter declared to be “The King of the Dudes.”

Wall’s reputation grew when he won another contest. A famous financier named John “Bet-A-Million” Gates made a wager that Wall could not go through 40 changes of clothes in between breakfast and dinner. Rising to the challenge, on their agreed upon day, Wall repeatedly appeared at a racetrack in one flashy ensemble after another. Exhausted but victorious, Wall ended the day by attending a ball at the United States hotel in flawless evening attire. He was received by wild applause.

As you can probably guess, a life of ordering custom Charvet cravats for a dog and engaging in incredible sartorial challenges isn’t cheap. By the time he died, Wall only left $12,608 to his family. I’m sure most people would consider him a bit of a failure, but I kind of love the colorful, extremeness of his life.