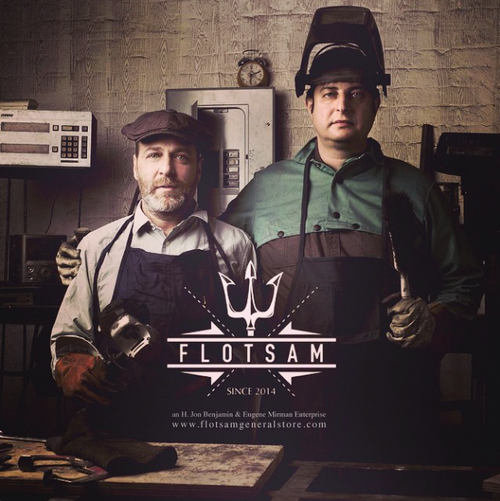 If you, like me, are interested in things, Flotsam General Store (a new webshop from comedians Eugene Mirman and H. Jon Benjamin) looks promising: things, designed/chosen by them, shipped to you in a sack. It’s a retail concept Mirman and Benjamin have been considering for 20 years. Said Mirman: “People will often say to us, ‘If you weren’t doing comedy or acting, what would you do?’ And I always say ‘I’d be an entrepreneur of mysterious bags.’”

If you’re skeptical of the site, which promises “a post-structural online shopping experience,” you shouldn’t be. “It is definitely real, and the products are real, and the bag is real, and everyone who orders one will get one.”

Regarding what you’ll get in your sack: It’s not easy to pin Mirman and Benjamin down at this stage. They know that the initial customers will likely be fans of their comedy work, but they want their designs to stand on their own. “We’re entering the design world, naked as a baby,” said Benjamin. “It’s not going to be, like, a Bob’s Burgers mustache.” According to Mirman, it could be made of forged steel, but it’s not a Toyota Corolla. They won’t rule anything out, although there are no wood projects currently in the works. Some of the items will be wearable. Probably.

The small mystery sack ($40) will contain approximately three items. The larger sacks, currently delayed due to manufacturing lead times, will have more. Said Mirman: “The things that will come in the bag will be somewhere between useful and interesting. People are like ‘Oh, I hope it’s a bag of sand.’ No you don’t, and neither do we want to send you sand.” What will the items be useful for? “Take it to a bar and start a party. Or a fight!” According to Benjamin, they will be “products that will leave a legacy. Something to be proud of for time immemorial.”

Once the sacks start to ship (the site launched Monday), there will be no keeping the mystery products under wraps, and the curators know that. “We aren’t sending a nondisclosure agreement as one of the three items,” said Mirman. But the bag contents will change–“like flotsam, the word”–so what one guy Instagrams won’t necessarily reflect what you’ll get if you order. Once the stuff is out there, Flotsam may offer customer favorites for sale on an individual basis, but they plan on continuing the sack sale model: “Mystery bags forever.”

The Future of Flotsam

If all goes well,  Flotsam is considering launching brick and mortar stores, following a traditional path: first New York, then Tokyo, then probably Massachusetts. It’s Benjamin’s goal for Flotsam to be as big as Starbucks. Eventually “in their coffee.” For the skeptical consumer, why trust two actors with $40 to deliver on their promise of good stuff? “$40 is not a big consumer risk,” said Mirman. Added Benjamin, “Look at Maurice McDonald, who started McDonald’s. He had $40, and look what happened.” Plus, shipping is free.