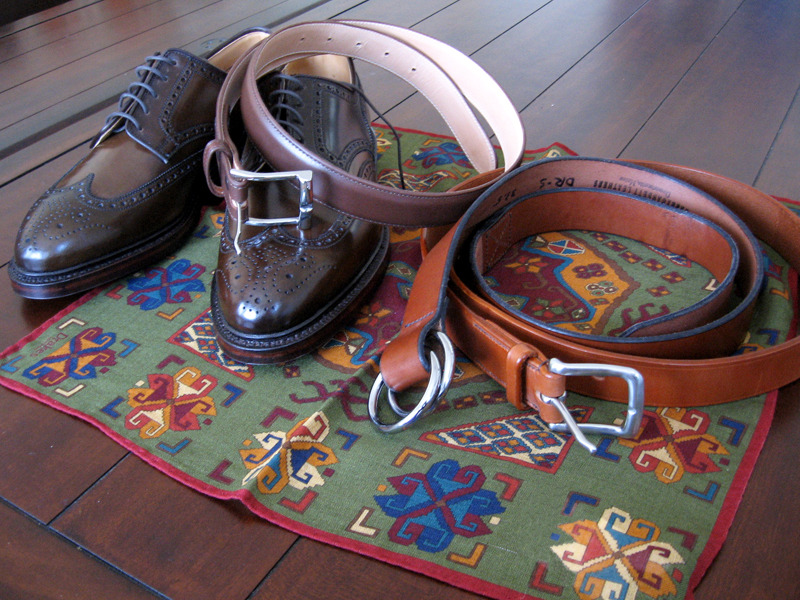 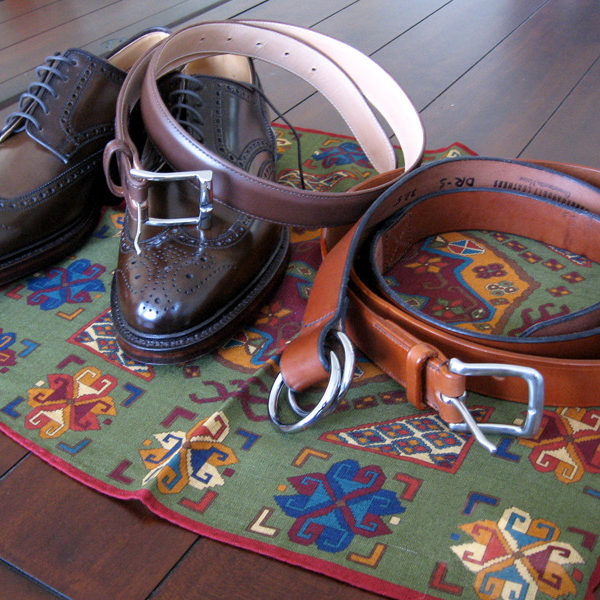 Belts are one of those things you can skimp on without looking too much worse for it. I wrote a post a few months back about how you can find a serviceable (even if not terribly well-made) belt for about $20-30. If you’re willing to spend a little more, however, I thought I’d cover some of my favorite places to get something better.

If you purchase most of your shoes from one company, it can be wise to source your belt from the same manufacturer. Companies such as Allen Edmonds, Alden, Crockett & Jones, and Edward Green make belts in the same leathers they use for their shoes. In this way, you can easily follow that rule of thumb that the color of one’s belt should generally match one’s shoes.

For other nice, off-the-shelf options, check some of the more traditional American clothiers, such as Ben Silver, Paul Stuart, and Brooks Brothers. Brooks discounts theirs by 25% or more once or twice a season. I liked the buckle on this one so much that I bought three in different colors. And though I don’t personally own any, people have written good reviews of Traflagar and Martin Dingman’s offerings.

Online, you can find some beautiful belts at A Suitable Wardrobe. Their lightly textured hides – made from 20-month old French calves – is a nice balance between the more boring, plain variety (which I admit I mostly have) and showier exotics such as alligator, ostrich, and crocodile. For something more affordable, Austin Jeffers supplies nice, basic designs for about $50.

The world of custom belts is vast, but I’ll only cover four. The most affordable I know of is bridle belt maker Narragansett Leathers. Bridle leather is a thickly cut leather with a high oil content, which makes it both harder wearing and water resistant. This is the kind of belting leather that will indeed last a lifetime. Narragansett makes their belts quite simply – leathers are cut, holes are punched, and buckles and keepers are then attached. A basic, durable belt starting at about $35.

Another bridle leather belt maker is Equus Leathers, who I like a bit better for the details they put in. The edges have a nice scored line, the keepers are squared off, and the edge burnishing is done a bit more nicely. I also like their very well-executed handsewn saddle stitching. Charlie, who runs Equus, used to make a living in bespoke saddlery, but the market for that has been destroyed by foreign imports. So now he just does belts, and knows the craft quite well.

The robustness of bridle leather makes it appropriate for chinos and jeans, but for suits and any worsted material, I like dressier, edge stitched belts from companies such as James Reid. Theirs are made from an all-leather, two-piece construction. There’s no inner layer or non-leather filler, which makes them much softer and smarter than bridle leather belts. The backing strap is made from full-grain, oak-tanned, harness quality cowhides from one of the last remaining tanneries in America, Herman Oaks. This strap is beveled along both edges, so that when the top layer is laid down, a contoured cross-sectional shape is produced with a feathered edge. Should you need an affordable buckle to go with their belts, you can contact Charlie at Equus.

Lastly, there’s Herve N. Sellier, a French maker of fine leather goods that was introduced to me by a friend of mine who knows more about quality clothing than anyone I know. I’ve never tried Herve N. Sellier’s goods, but the company’s founder and craftsman used to produce exclusively for Hermes for twenty years, which alone should probably say something about his craft. Remarkably, the prices he charges for his belts aren’t too much more than those from the options mentioned above.