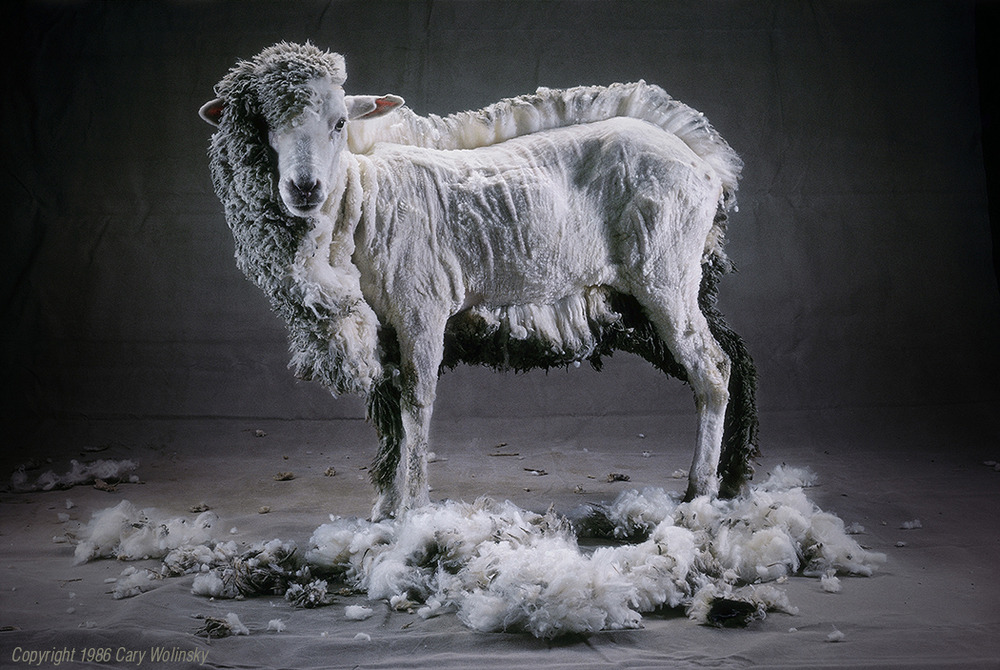 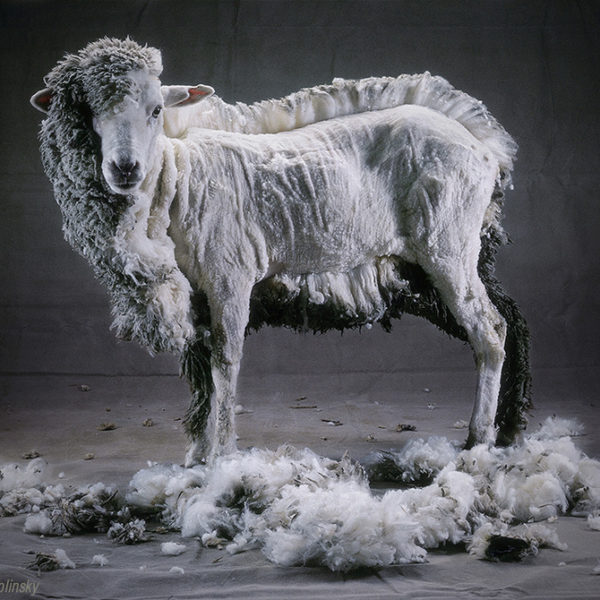 Wolinsky explains the difficulty in capturing this image, to illustrate a National Geographic story on wool.

It seemed easy enough. To show how much wool a sheep grows in a season just shear off half the wool and have the sheep stand sideways.

Knowing
nothing about sheep I figured I’d have this picture done in an
afternoon. Here’s the plan: find a sheep that is wearing one season’s
wool. Hire a good shearer. Give the sheep half a haircut.

The
shearing season had started early in New Zealand. But I was determined
to find a few sheep that hadn’t been fleeced. We drove and drove. It
seemed we had landed on an island populated by nearly naked sheep.
Then…

“There…on the right…in that yard.” I was jubilant.
Robin Kidd, the “gun” (New Zealand parlance for “the best”) shearer, who
had already determined that I was an obsessed lunatic, groaned at the
sight of 5 very over-weight sheep that looked like they had been
sleeping in ill-fitting pajamas for a year.

I banged on the front
door of the little farmhouse and explained my mission to the woman who
owned the sheep. To my amazement, she believed me.

Having no dog,
four of us chased the fat, bobbing sheep around the yard finally
bringing them down with flying tackles. It took all four of us to lift
each sheep onto the back of a pickup.

The shed was quiet. The five
sheep huddled in the corner of the shearing pen looking like they would
very much like to leave. Robin pulled one of them upright so that it
was sitting on its rump. The sheep slumped into a catatonic state. Robin
grasped the shears then hesitated. He had removed so many sheep jackets
as whole fleeces he couldn’t figure out the moves he needed to do just
half. He pecked away with the shears. Dirty wool fell all around. Done.
He released the sheep. It bounded to its feet, swayed a bit, then
toppled toward the still woolly side. The now unbalanced sheep lay
helpless on its side, feet bicycling in the air.

The next try was
better planned. A grazier (Australian for sheep farmer) near Melbourne
agreed to hold, unshorn, 100 “hogs” until I arrived. (A one year old
sheep is called a hog…Go figure!) We converted the sheep shed to a
studio. I had painted a huge canvas with waterproof paint (easier to
clean up) to use as a seamless background. 99 young Merinos tried to
hide behind the one in front as I went about the task of choosing which
would become famous that day. I invited the cutest, cleanest hog to
visit the well-lit studio to be half undressed for all the world to see.

Shearing
sheds are hot, dusty and, if the truth be known, a bit bloody. Electric
shears are similar to those that barbers use but a lot courser. Under
all that wool Marino sheep have loose, wrinkled, ever so soft, and
sensitive skin. When shearing a mob of several thousand sheep, shearers
don’t waste much time avoiding wrinkles. Otherwise clean, white, nearly
naked sheep are spotted with little red shaving nicks. I couldn’t very
well put a half shorn sheep with bloody shaving nicks in font of 40
million National Geographic readers.

As a result the first sheep
never achieved stardom. Nor did the second, the 19th or the 27th. We
tried shearing them front to back as well as side-to-side. The well
planned, half day photo shoot was trying the patience of not only the
generous grazier but of the 12 motorcycle shepherds who locked arms to
create a human fence around each sheep while I attempted to make a
picture.

In the end it was sheep number 30 that became a star.
Remembering how my dad temporarily patched his shaving nicks with a bit
of tissue (I now use an electric shaver) I took a wad of wool, patched
the nick on number 30’s neck and got set up to make a picture. The
motorcycle shepherds locked arms. The camera shutter clattered and
72,000 watt-seconds of flash bathed number 30 in light with a happy
popping sound. The picture ran as the lead shot in my National
Geographic article about wool. Number 30 went on to hire an agent and is
looking for new bookings.