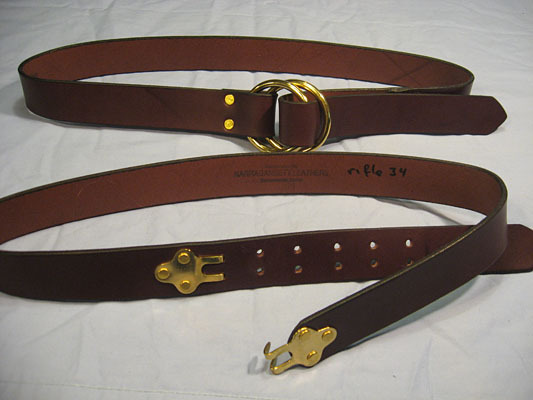 My go-to casual belt is a rifle sling belt which I ordered from Narragansett Leathers.  (I stole the idea from The Trad.)

Narrangansett make their accessories by hand in Damariscotta, Maine.  In addition to the O-ring and Rifle Sling belts picture above, they also make pelican and hoof-pick belts for the mariners and equestrians among us as well as all sorts of traditional belts.  They’re all extremely reasonably priced, too – about $35 or $40.  Cheap enough to cover your belt needs, whatever they may be.  They’ll even make you a briefcase.  I had them make one for my wife as a graduation gift, and it’s one of her most favorite possessions.

They’ll ship anywhere, but they’re closed February and March (snowed in, I’m guessing), and you have to call them – 207-563-5080 is their number.  They’re exceptionally nice.