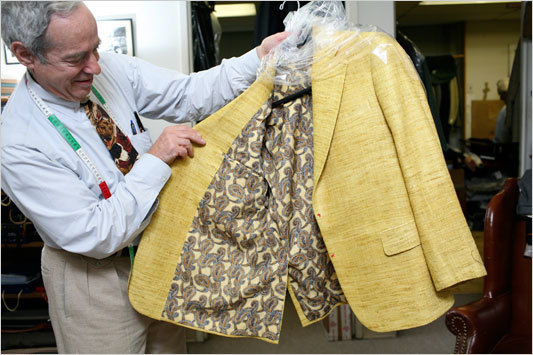 “But I don’t like to make a seersucker jacket or suit for anybody,” he said. “I’ll do it, but I really shouldn’t. Because of what I have to charge them for the tailoring” — his prices start at $1,400 for a jacket made-to-measure in standard patterns and sizes and up to $2,400 if it is custom-made — “it’s not worth it for something that’s just made of cotton.”

He continued: “It’s like this … even the richest guy in the country wouldn’t pay $20 for a banana. He could afford it, but he wouldn’t do it.”

One of Mr. Winston’s favorites is a bolt of cloth printed with Zodiac-themed variations on the Kama Sutra. “A customer had me make a jacket out of this for his sister’s wedding on Fishers Island some years ago,” he said. “I bought a lot of it and use it as tuxedo linings now. Some of the women in my workrooms refused to do it, so I had to have one guy bring it home to work on.”

– Paul Winston of Chipp2 on how he’ll make you a tuxedo with a Kama Sutra lining, but he’d be reluctant to make you a suit out of cotton.

(Pictured above: Paul holding up a jacket made out of tussah silk, a very slubby, textured fabric made by allowing silk worms to live on a wild diet rather than exclusively on mulberry leaves)