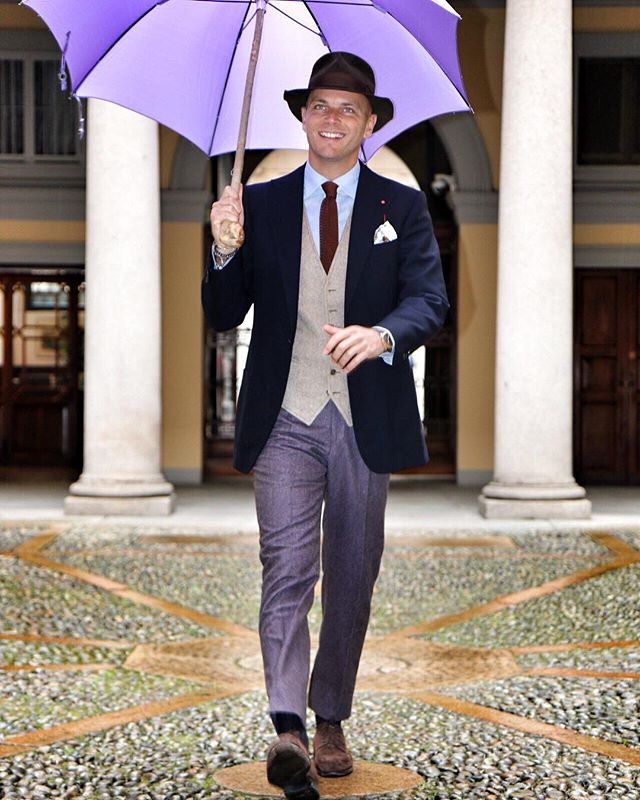 If you’re not familiar with Luca Rubinacci, you’ve certainly seen him around. He was a popular subject on street style blogs and a mainstay at The Sartorialist for years, often catching the attention of men’s style enthusiasts with his colorful dress and stacked bracelets. He’s also a member of the Rubinacci family, who owns one of the most famous tailoring houses in the world. In the early-20th century, when Neapolitans were obsessed with British style, their head cutter Vincenzo Attolini deconstructed the Italian suit, making it airier and more comfortable for local clients. Other tailors soon followed and the Rubinacci style has broadly become synonymous with Neapolitan style ever since.

Luca also runs one of my favorite Instagram accounts. Every few days, he posts a short video that starts with an enthusiastic “HELLLLOOOOO EVERYONE!” If I were dropping a mixtape this year, it would 100% start with Luca’s hello.

The videos are whimsical and totally earnest, which is what makes them great. They’re also pretty informative, especially if you scroll back far enough (lately, some of the posts feel a bit niche). Luca covers everything from how clothes should fit to dressing down tailored clothing. There’s a tip about how to straighten your shirt without shoving your hands down your pants in public (just put your hands in your pockets and pull the shirt down from inside). And while he obviously represents his family’s company, I like that he has a very grounded view of things. He admits you can look great in ready-to-wear, and covers some of the more reasonable advantages of going bespoke. Luca’s style is a bit further out than I would choose for myself, but it suits him and his personality. And his suggestions are solid regardless of your wardrobe.

Below are ten of my favorite Luca Rubinacci clips. He filmed himself jumping out of an airplane in what looks to be a tan cotton suit and Belgian loafers, which is amazing.

Gentlemen tips: " when and where to wear a white shirt " 🤵🏼 #whiteshirt #rubinacci #rubinaccivideo