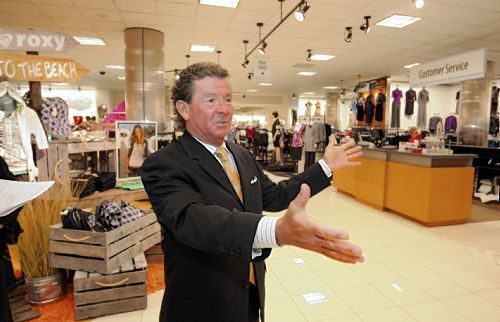 I’m almost always disappointed by the salespeople I meet when I go shopping. Most of them have been poorly trained, and since clothes aren’t their passion, they typically have no idea what they’re talking about. Whether they do it with good or bad intentions, I find that most of them give terrible information, and I worry for the poor schmuck who drops a pretty penny on a product that neither he or the salesperson know much about.

It’s a little better when you move up-market. For example, the suiting department at a Ralph Lauren flagship store will be better than, say, Macy’s. At the same time, it’s still a mixed bag even at the high-end stores.  "Nerdier" boutiques such as Self Edge and The Armoury have really knowledgable staffs, but there are plenty of boutiques with ill-informed salespeople. As well, the stand alone shops for Crockett & Jones and Alden will often have salespeople who can meaningfully talk about their products, but if you go into Barneys or Neiman Marcus, you can easily come across someone who will try to sell you $700 shoes and not know a single thing about it.

Thus, I think it’s important to know when you’re being bullshitted. If you’re asking about the fit or quality of a product, you need to make sure you’re getting good advice. Unfortunately, to know this, you kind of have to already know a lot about menswear. This creates a kind of catch-22: you’re either the person who doesn’t know much about clothes and have to rely on sales staffs for information, or you’re the person who knows quite a bit and can tell when someone is bullshitting you.

To get out of this conundrum, I thought I’d create a simple set of questions a neophyte can arm himself with. When someone is selling you a product, try to innocently ask them these questions. If they answer correctly, you can somewhat rely on their advice. If they can’t, it doesn’t necessarily mean you’re looking at junk, but it does mean that you should be incredibly skeptical of any information the salesperson tells you, especially regarding the fit or quality of their wares.

Suits: If you’re buying a suit, ask the salesperson if the jacket is canvassed or fused. Without going into too much detail, you should just know that jackets are made like sandwiches – there is the wool fabric shell on the outside and then either a layer of horsehair canvas or a fusible interlining sandwiched in between. This inner layer is what gives the suit jacket its shape. Canvas will allow a jacket to drape better, but it’s more expensive to make; fusible interlinings will be stiff and degrade over time, but they’re cheaper. A knowledgeable salesperson should be able to tell you if a jacket is fully canvassed, half canvassed, or fused, and be able to explain the benefits and drawbacks of each.

Shoes: For shoes with leather soles (“hardbottoms”), ask the salesperson if the sole has been glued on or made with either a Goodyear welt or some other type of construction. Roughly speaking, well-made English shoes will be Goodyear constructed and well-made Italian shoes will be Blake/ Rapid constructed. You should always avoid leather bottom shoes with glued on soles.

It’s too much for now to explain the differences between Goodyear and Blake/ Rapid, as well as the many other types of construction aside from these. The point here is simply that a good salesperson should be able to tell you about the construction method and what the benefits and drawbacks are to that approach.

Ties: For ties, ask the seller about the silk and interlining’s composition and weight. Note that only luxury-end tie representatives will know such answers, and there are perfectly good ties lower down the market. Brooks Brothers ties, for example, are pretty good, but I doubt many salespeople at Brooks will be able to tell you much about their ties’ constructions. To read more about ties and how they’re constructed, you can read my earlier posts here and here.

In short, you want to make sure the person giving you advice knows the very basics about their products. Anyone who tells you that such and such item is of “great quality” and “made of really nice materials,” but can’t discuss the basic qualities above is, frankly, talking out of their ass.

Filed Under: Best Of, Salespeople, Shopping