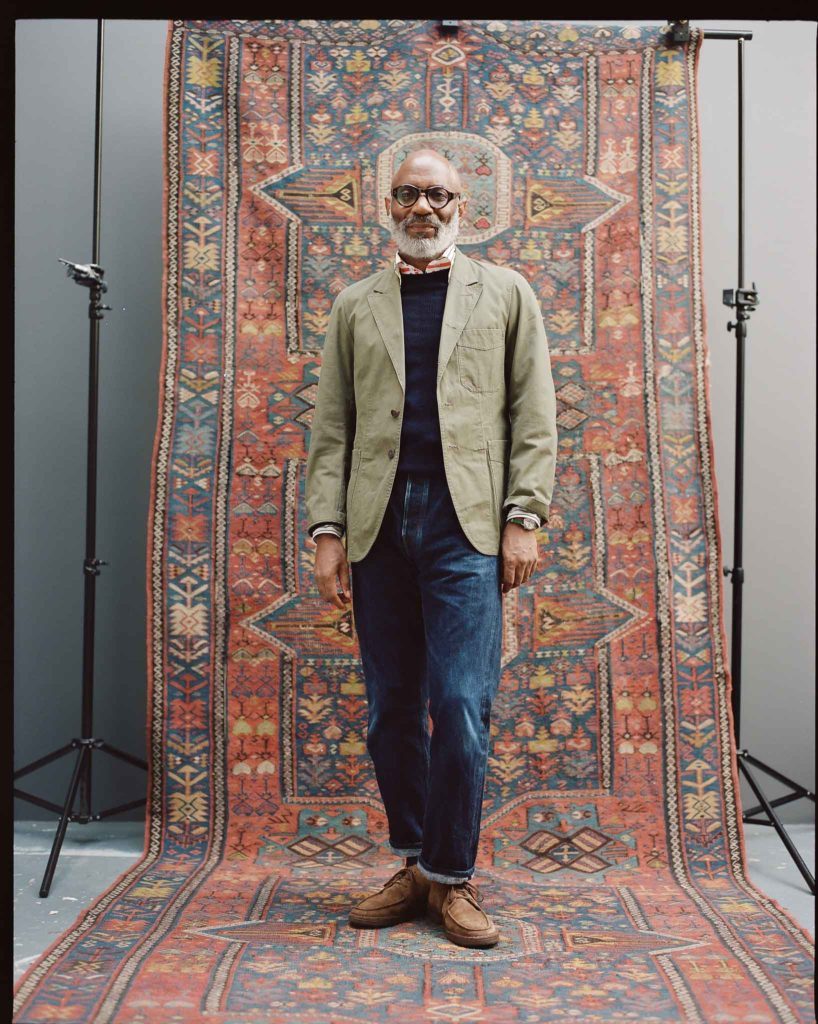 About thirteen years ago, Carlo Brandelli, then-Creative Director of Kilgour, bragged to the Financial Times that his new Unstructured line felt featherlight while also retaining the elegance of British tailoring. “I wanted to wear a jacket all day at work, but the usual heavy, stiff, and fully-lined kind just isn’t comfortable,” he explained. “You need the heritage of tailoring know-how in order to do lightness with structure. It’s just that no one on Savile Row has really tried it before.”

The thing is, it has been tried before — countless times. In 1919, Frederick Scholte became the tailor to Edward VIII, the Duke of Windsor. As one of the earliest menswear “influencers,” the Duke helped set the direction for men’s style over the course of the next hundred years. Scholte also trained Per Anderson, one of the founders of Anderson & Sheppard and a celebrated practitioner of the English Drape. Together, Scholte and Anderson & Sheppard dressed some of the most stylish men of their time. Since the 1990s, Anderson & Sheppard expats such as Steed of Savile Row have carried the soft-tailoring torch.

Today, soft tailoring is the default around the world. Vincenzo Attolini famously took the stuffing out of his jackets when he worked as the head cutter at Rubinacci. His innovation soon became a style signature for the region. Over in the United States, trad shops such as Brooks Brothers and J. Press are known for their hook vents and natural shoulders. And today, you can find deconstructed jackets from Boglioli (Italy), Sid Mashburn (the United States), P. Johnson (Australia), and Saman Amel (Sweden). Some of these jackets are so lightweight, they’d disappear if you removed another layer.

Sof tailoring promises to be more comfortable, casual, and modern. Many men gravitate towards it because they want tailored clothing without any of the stiff ceremony. But there are different types of soft tailoring, and not everyone looks good with a mushy shoulder line. So when is soft too soft? When would you benefit from having a bit of structure? To understand this, it helps to review how tailored clothing is made. 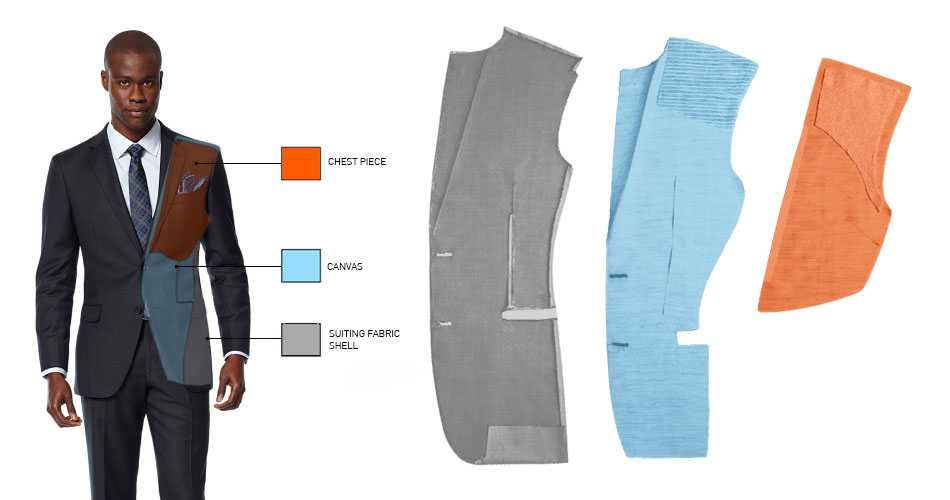 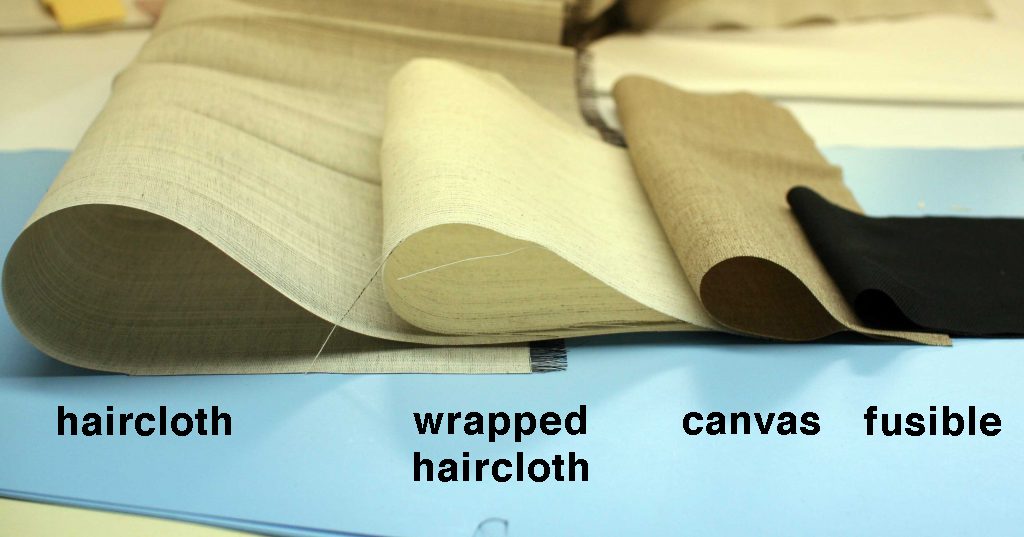 Unlike most casualwear, tailoring is typically made from multiple layers of material. You have the shell fabric on the outside, such as the tweed, wool flannel, or linen that you can directly see and touch. On the inside, you’ll find a canvas or fusible, which is used to stabilize the front (without this backing, the front of your jacket would hang like a loose, open shirt). Then there’s a chest piece made from haircloth or wrapped haircloth — a technical term for a stiff material made from horsetail strands — that extends from your shoulders to the bottom of your rib cage. Across the shoulder line, you may have a pad or some wadding. Finally, you have a layer of domette, which is a fluffy material used to prevent the wiry horsehair from poking through. If there are cuts in the canvas, a tailor may even put patches in these areas to give them support. In the end, that’s a lot of cloth.

When a jacket is described as soft, that means one or more of these layers has been removed. It may not have any padding, wadding, or haircloth. The canvas could also be lighter. This is what gives the jacket a softer, more casual feel.

On the other hand, a softer jacket may be challenging to fit, as the layers inside generally help “smooth” out the surface. No Man Walks Alone’s new tailoring line with Sartoria Carrara, for example, isn’t made with any shoulder padding. However, the canvas stretches over on top of the shoulder, and sitting on top of the canvas is a layer of domette felt. “When developing this line, we recognized the limitations of having zero structure from years of selling Eidos suits that only fit 25% of men,” says No Man Walks Alone co-founder Greg Lellouche. “Adding a layer of domette to the shoulder helps bring that percentage up to 80% or so. I’m shocked at how well the collar and shoulder fit on a wide array of guys, while still keeping with a very light shoulder construction.” 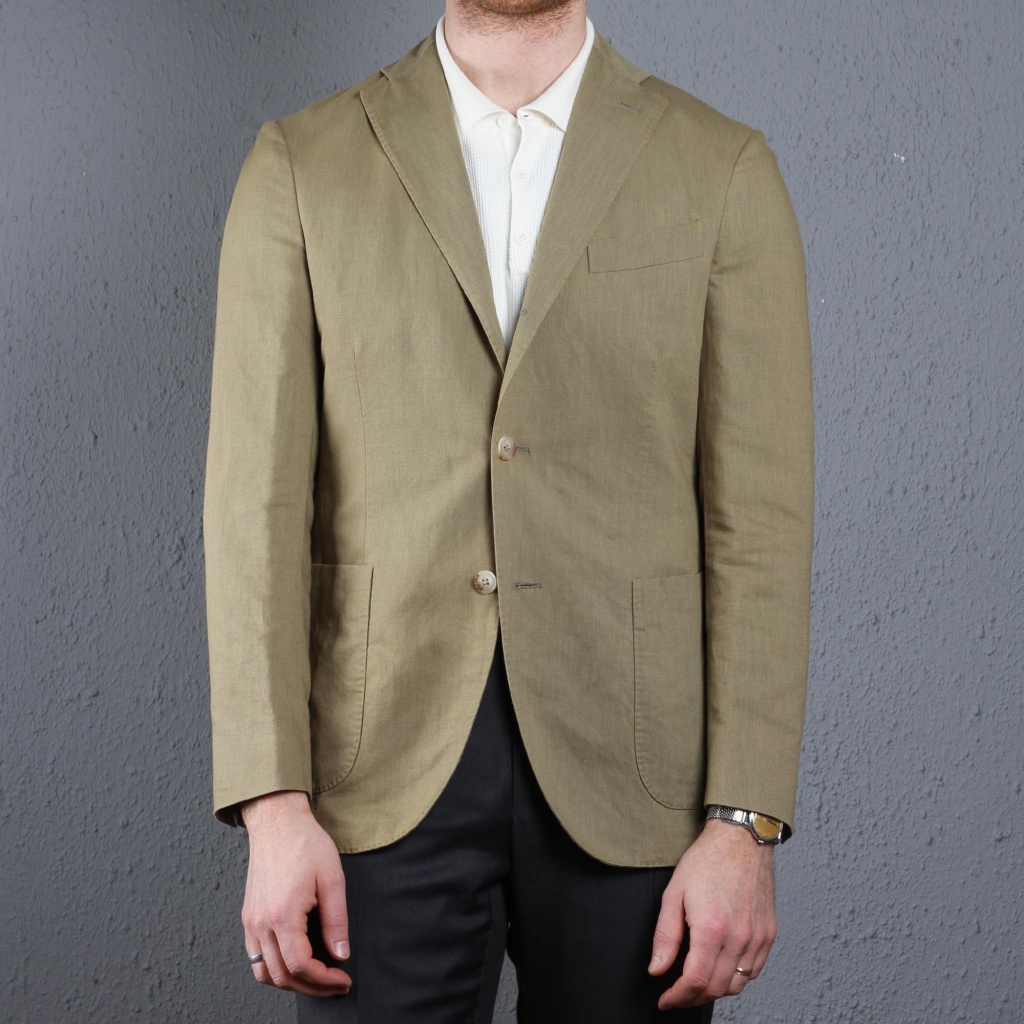 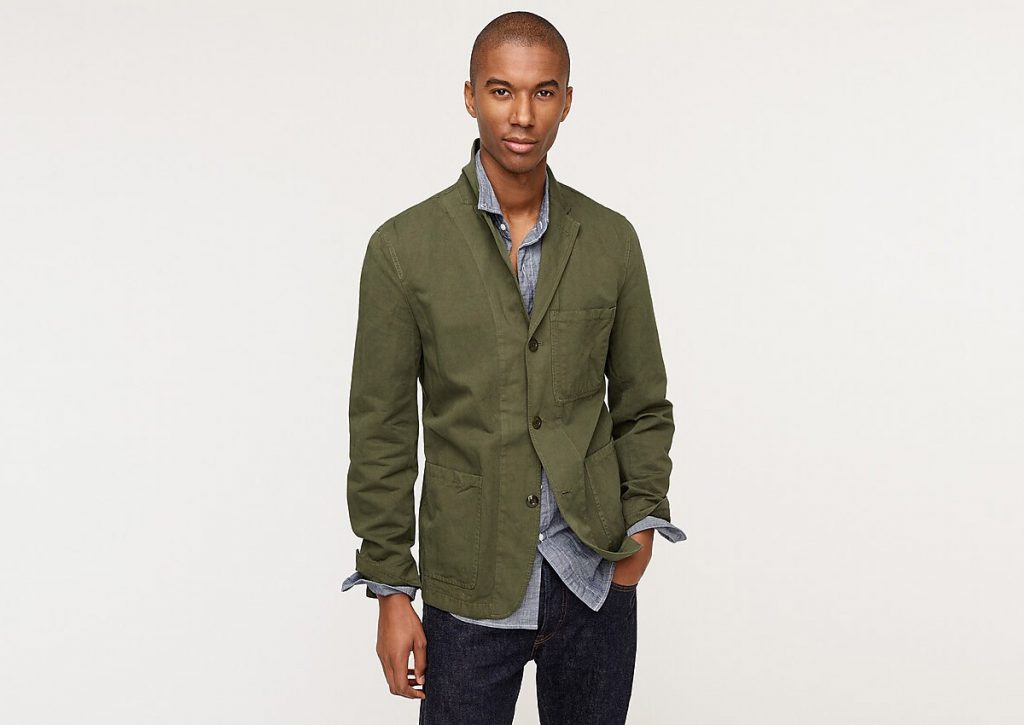 There’s another benefit of having some structure in a jacket: it gives the silhouette some shape. When a jacket is made with very little structure, it tends to hang like casual outerwear. That doesn’t necessarily mean that it looks like a chore coat or trucker jacket. But depending on the coat has been cut and constructed, the shoulder seams generally have to sit right at your shoulder bone. The chest may also sit close to your chest. Sometimes this can look good on certain figures — often men with broad shoulders and narrow waist. But sometimes it’s not very flattering, as it can make your torso look like a tube, or worse, a pear. 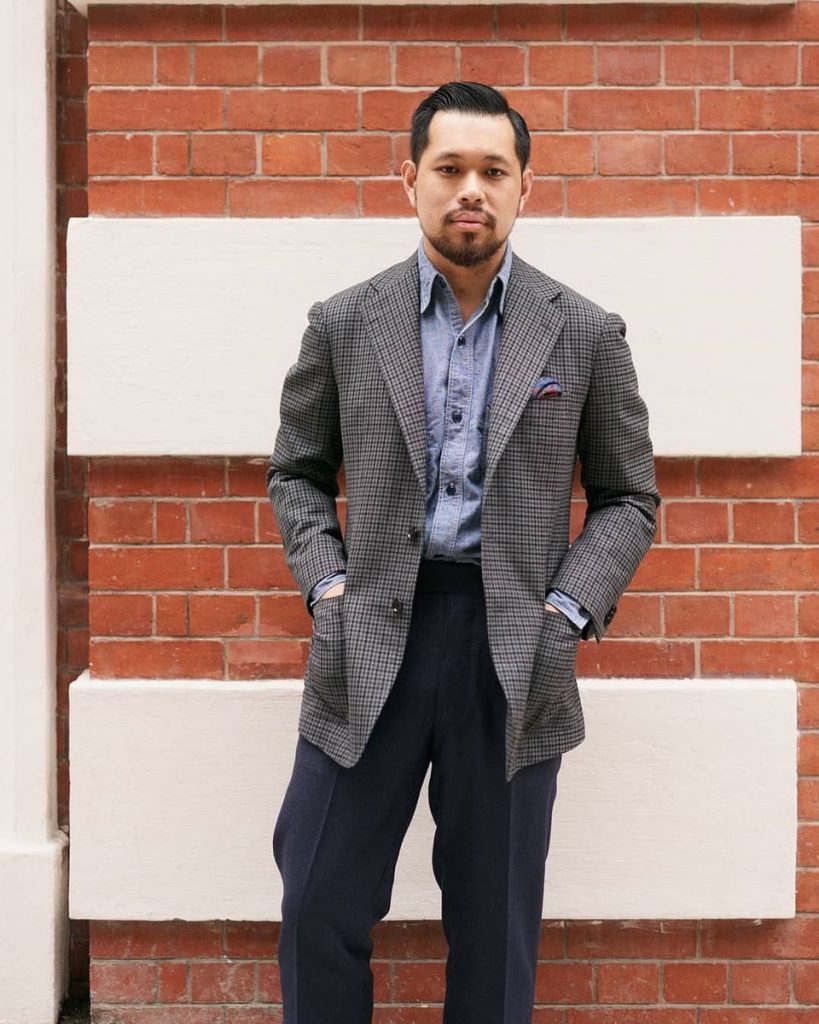 Let’s look at some softly tailored jackets with different degrees of structure inside. The above is The Armoury’s exclusive Model 3 from Ring Jacket, a tailoring factory based in Japan. The Armoury’s Model 3 is uber soft. If you picked it up, you’d think it was made from nothing but the shell fabric alone. However, inside is a lightweight canvas that extends into the shoulder line and a soft chest piece. By using just a little bit of material, The Armoury can extend the shoulder line and give the chest some structure. The result is a more flattering V-shaped figure. “We find that it fits almost any body type,” says Max Papier, The Armoury’s Content Manager and Brand Strategist. “If you have narrow shoulders, the extended shoulder line will help build that V-shape. If you have broad shoulders, your natural shoulders will fill that space.” 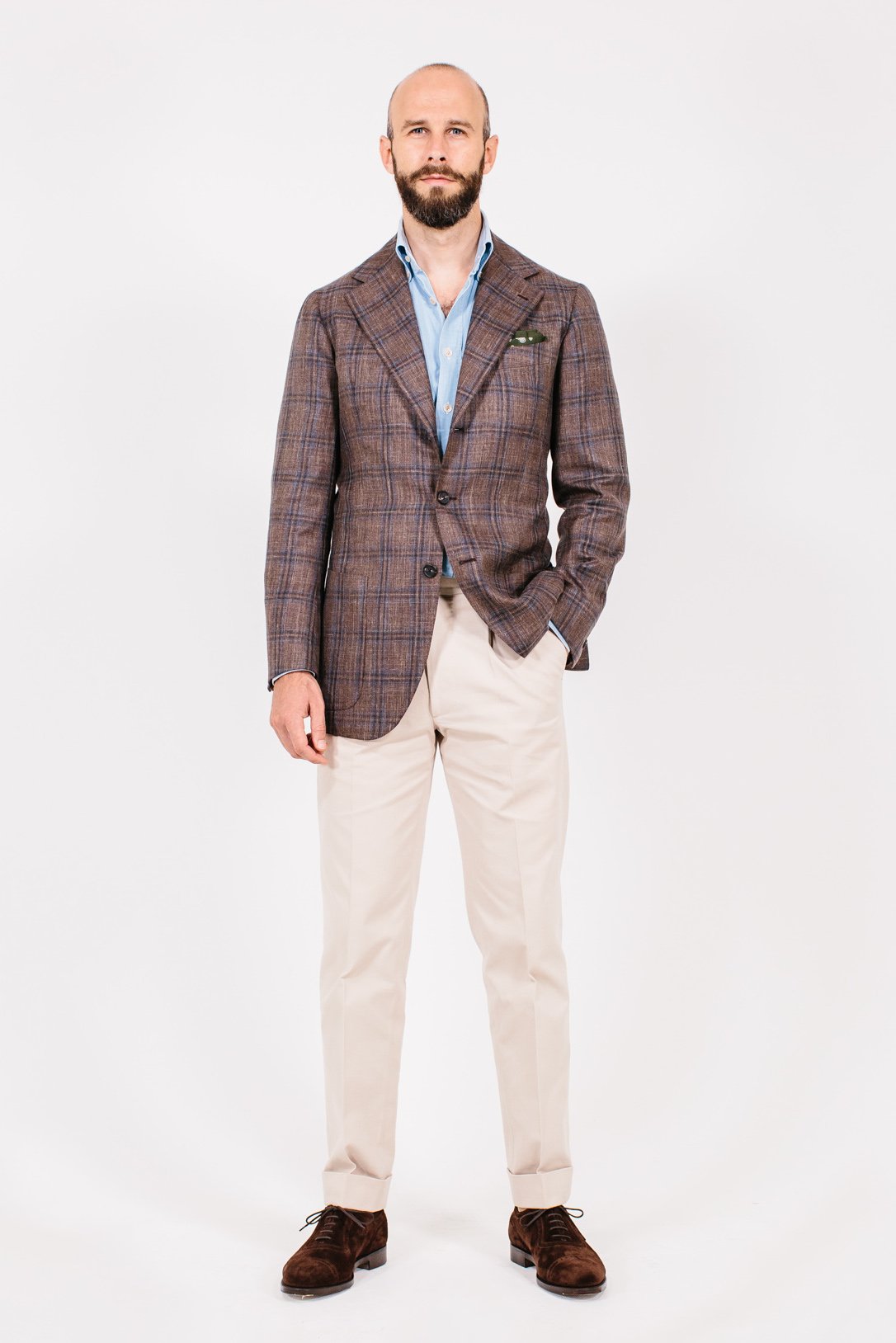 Here’s Simon Crompton of Permanent Style wearing a jacket from Sartoria Solito, a family-owned tailoring company based in Naples, Italy. Solito is one of the softest tailoring companies in the region. Their suit jackets and sport coats use a full canvas, lightweight chest piece, and a one-ply shoulder pad. By adding the pad, Solito can smooth out the shoulder line. On Simon’s jacket pictured above, you can see how the chest piece adds a bit of shaping. The chest looks a bit rounder and more sculpted.

Luigi Solito, the son in the family, tells me that he doesn’t like extending the shoulder line because he doesn’t feel like a one-ply shoulder pad gives enough support. On Simon’s jacket above, you can see how the shoulder seams sit closer to his natural shoulder joints. In the previous section, the man wearing The Armoury’s Model 3 is putting his hands in his pockets, which is distorting the silhouette. However, you can see how the shoulder ends droop a little because they only use a canvas (no shoulder pad). This is the trade-off if you want an uber-soft jacket with an extended shoulder line. 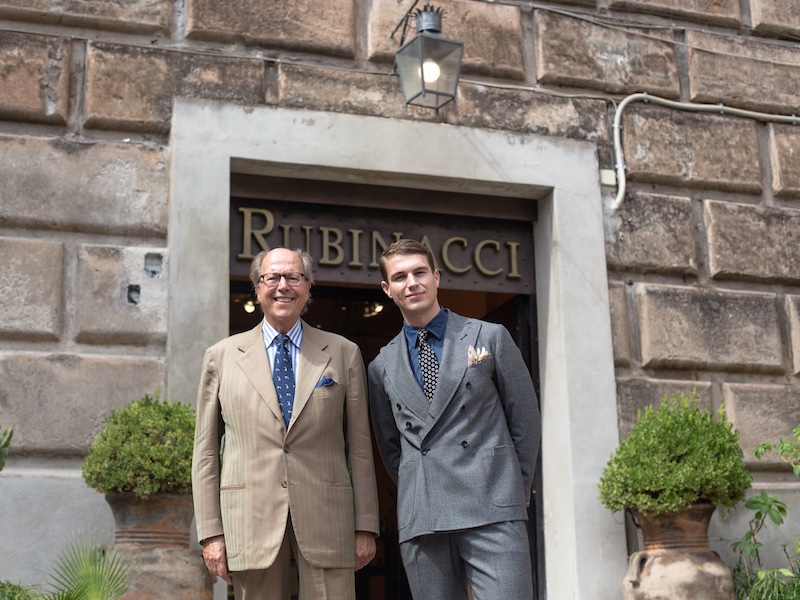 You can see this effect over time. The man on the left is Mariano Rubinacci, the head of the Rubinacci tailoring house in Naples. At the time this photo was taken, his tan Solaro suit was many years old. Over that period, from sheer wearing and dry cleaning, the ends of his shoulder line have started to collapse. The drooping you see is the difference between his natural shoulder (at the joint) and the end of his jacket’s shoulder (which is supported by just a soft pad). George Wang, who runs the Beijing-based menswear shop BRIO, once told me that he thinks this look charming and helps make a suit look more casual. I also don’t mind the effect, but some tailors feel it looks sloppy. 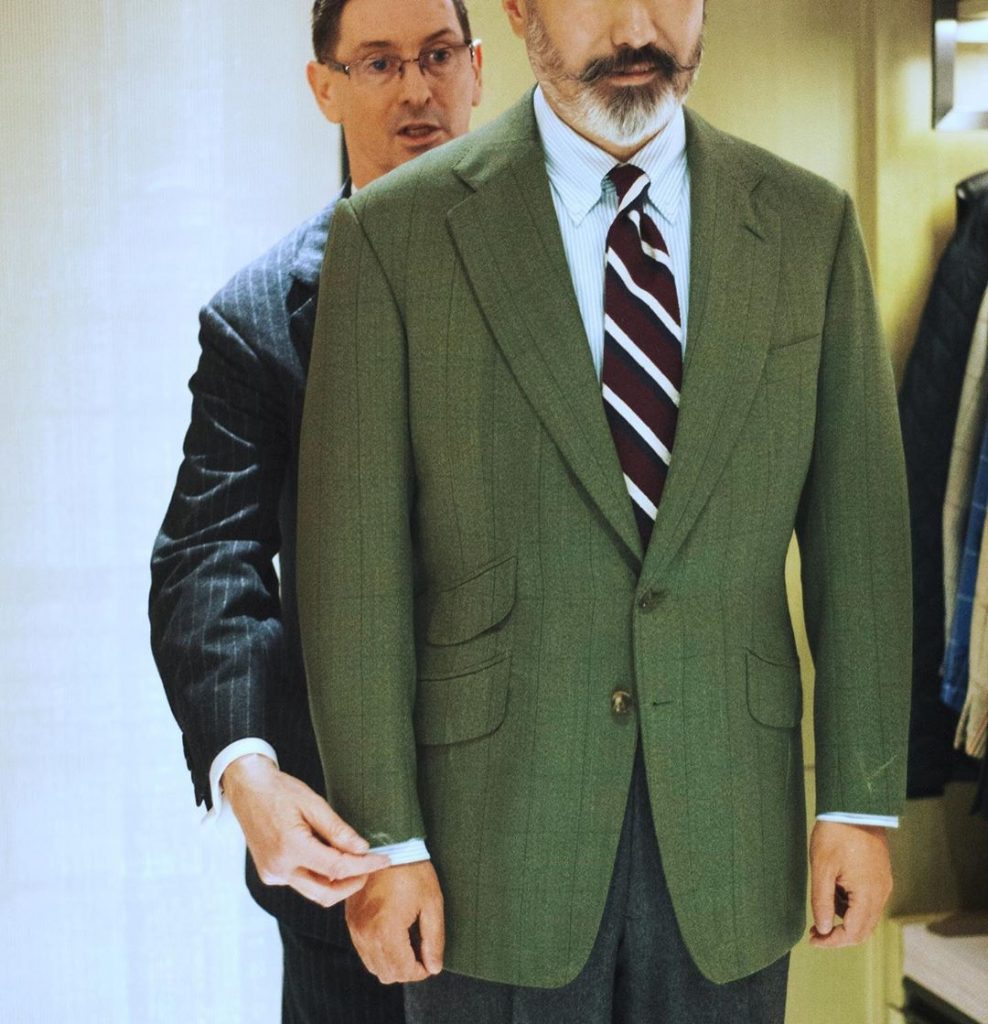 Here we have Steed, a British firm that specializes in something known as English Drape. English Drape is a form of soft tailoring, although not as soft as what you’ll find in Naples. By default, Steed uses a full canvas, a heavier chest piece, and a 1.5 ply shoulder pad. The result is something that looks a lot more shapely. Instead of conforming to your body, Steed jackets feel roomier, almost as though they’re hovering around you. The chest seems a lot more sculpted. The shoulder line is much straighter. Depending on how you want the jacket cut, the shoulder can be extended a little further without collapsing.

You can really see that shaping on Instagram user baoweizhi99. The chest here looks much rounder and more sculpted than the other examples above. At the same time, in other IG photos, you can see how the jacket also looks very soft and relaxed. Compared to stiffer jackets from Huntsman or Richard Anderson, Steed is still very soft. But their jackets also give you the illusion of a more athletic figure. 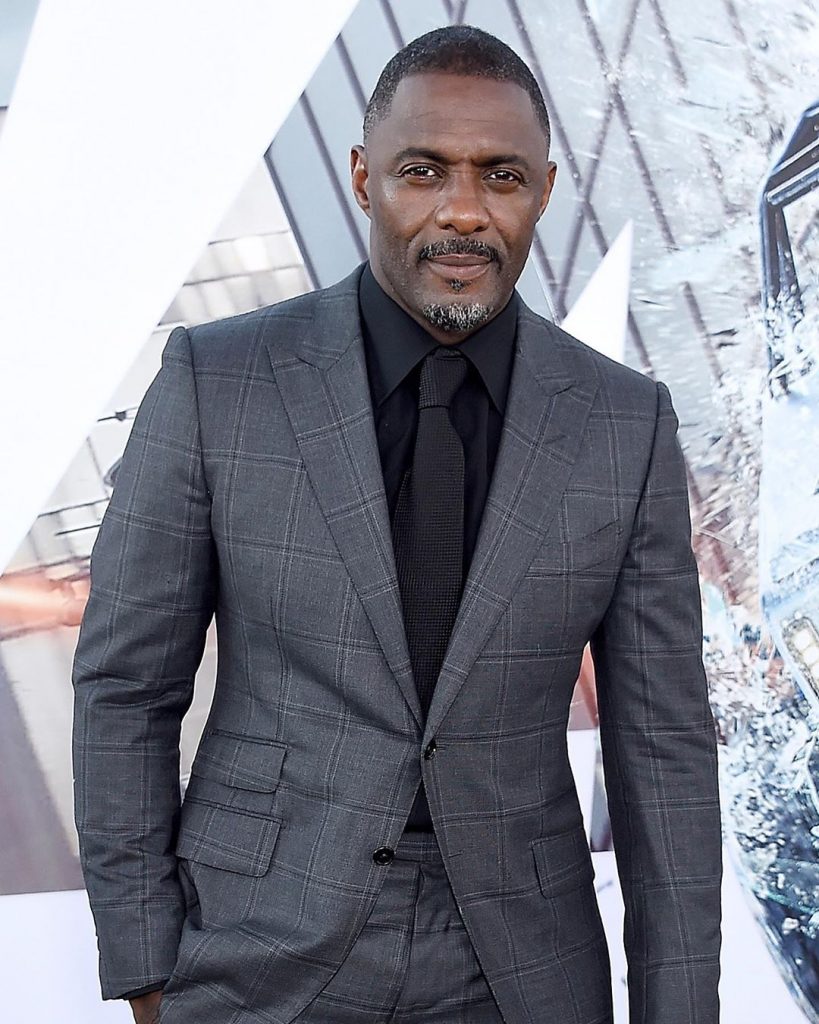 Tom Ford is the opposite of soft tailoring. Inspired by 1970s tailoring houses such as Tommy Nutter, Tom Ford’s suits are sharp and shapely. They feature a lot more padding through the shoulder line and a ton of haircloth in the chest. As a result, you can achieve a sharper, more angular, and more sculpted silhouette. In the photo above, you can see Idris Elba wearing one of the designer’s creations, the O’Connor two-piece suit. Elba already has a natural V-shaped figure, so some of this can be attributed to his figure. But notice how rounded the chest looks. That’s thanks in part to the heavy use of haircloth. 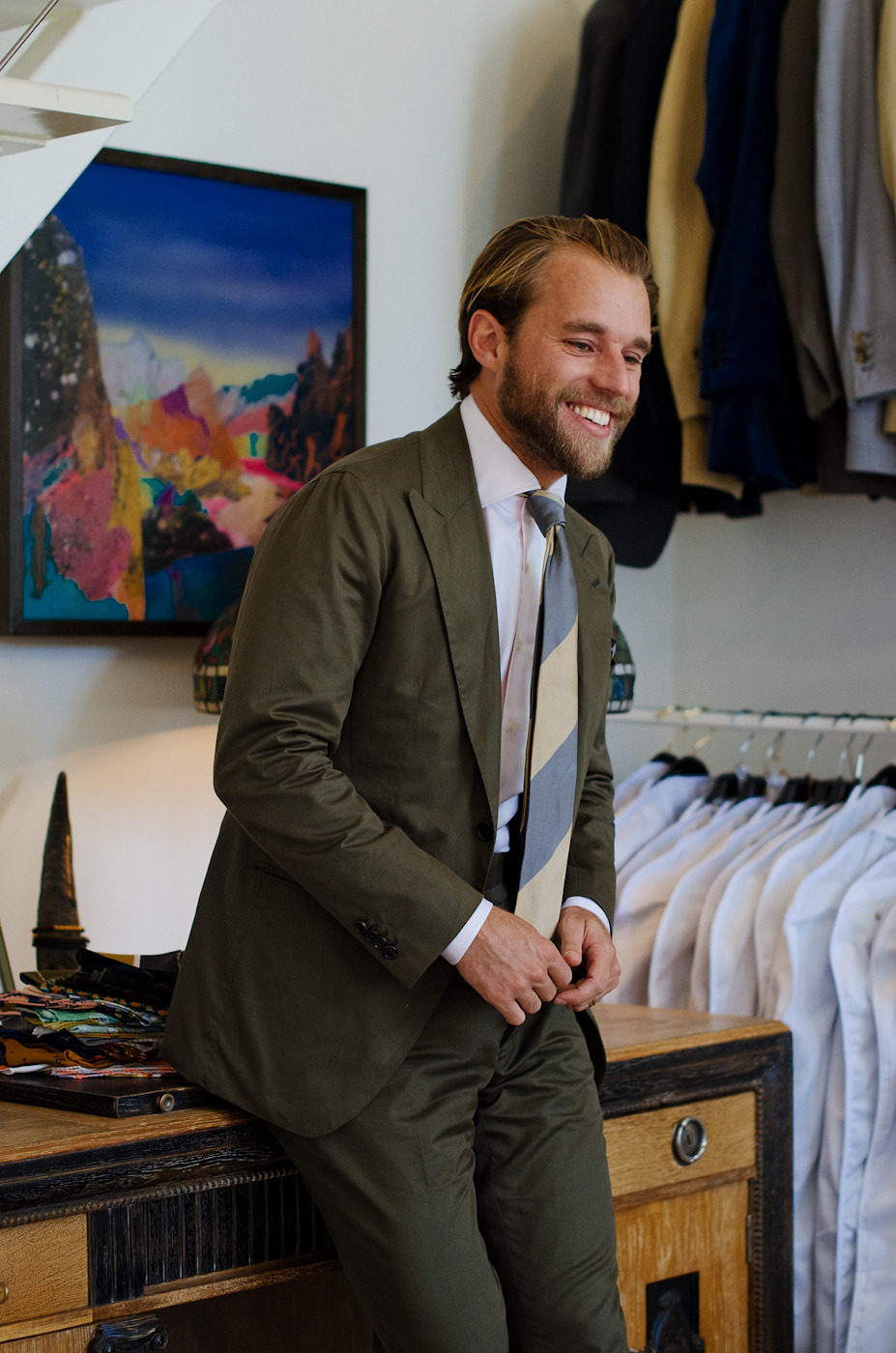 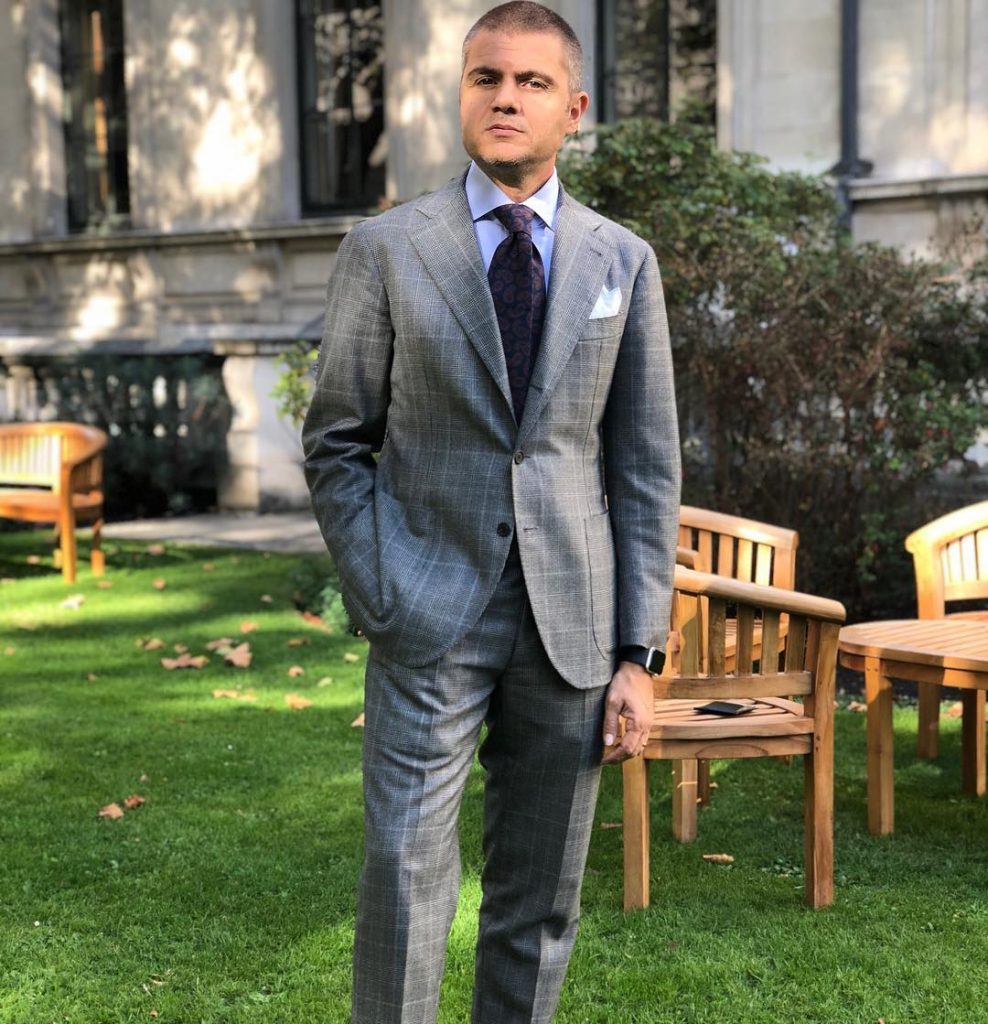 This isn’t to say that some people don’t look tremendous in soft shoulders. When I met up with Patrick Johnson some years ago, he handed me his jacket so I could look at the interior construction. His company makes suits and sport coats in various construction techniques, but the softest line wears almost like a shirt jacket. I think the style suits him partly because of his figure (a lean man with broader shoulders) and demeanor (there’s just something very cool and easygoing about Patrick).

Luigi Solito also wears a softer shoulder line than what he makes for many of his clients. In the photo above, it looks like he’s wearing a suit that’s thinly padded, but in some of his garments, there’s nothing but canvas and domette. Luigi tells me he prefers a softer shoulder because his natural shoulders are a bit square. Heavy padding would make him look like Frankenstein’s monster.

Over at Drake’s, you can find a fully unlined and unstructured jacket that they call their Games suit. It’s made with three patch pockets, a five-button front, and peak lapels. The jacket wears a bit short, has puckered seams, and is machine-washable. It’s a much more casual take on tailoring — perhaps better described as casualwear than anything that approaches a suit. In their lookbooks and on Jason Jules at the top of this post, it looks tremendous. But soft construction will often look better on men who have broad shoulders or a certain way about them.

No jacket construction will work for everyone. A lot depends on your body type, taste, and lifestyle. The best way to know if a jacket looks good on you is by putting it on. However, by training your eye for the nuances in a jacket’s silhouette, you can start to better judge whether you benefit from having a bit more structure in your life.