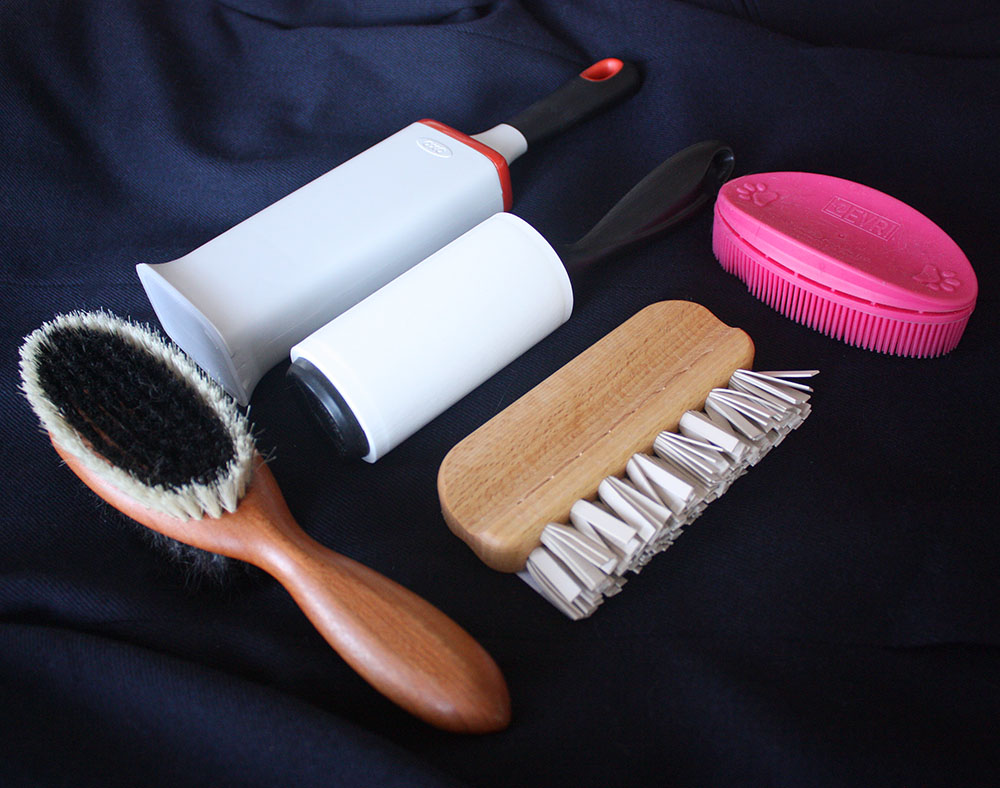 Every day, I wake up with the renewed hope that I’ll look as fabulous as the picture-perfect influencers I follow on Instagram. And yet, every day, I walk out of my home wearing the same clothes they influenced me to purchase, but covered lint, cat hair, and all manner of debris. For ordinary folk who don’t live in vacuum-sealed Dwell Magazine enclosures, dust is part of life. Pet hair clings to textured fabrics such as tweed, hopsack, and moleskin like two sides of Velcro. Unless you wear Saran Wrap — and, perhaps, not even then — you probably spend a small part of your day brushing yourself off like Steve Hickman, the hambone artist.

So, to help you, as well as myself, I tested $160 worth of lint brushes. These range from high-end clothes brushes to German-made rubber brushes to standard lint rollers. For those who live with cats or dogs, or have ever refrained from buying a corduroy suit because they were skeptical of the upkeep, here’s to a lint- and pet-hair-free life. 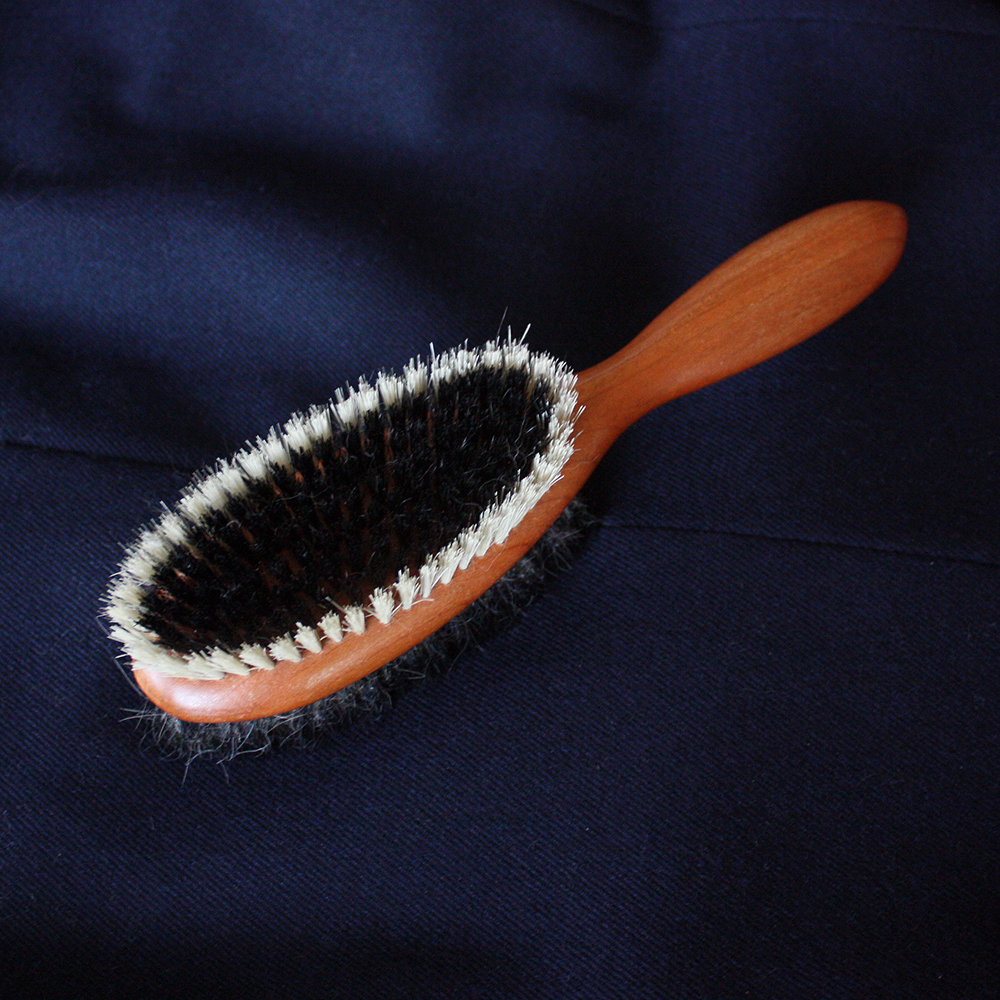 Back in the day, before a dry cleaner was on every block, people cleaned their tailored clothes with a clothes brush. If you have suits, sport coats, or tailored trousers, you’re still better off cleaning your garments with a clothes brush than sending them to a dry cleaner. Most dry cleaners are little more than drop-off locations for the same mass-cleaning plants that are located just outside of a city’s boundaries. Those cleaning plants can be harsh and careless, which is why we often recommend sending high-end tailored clothing to Rave FabriCARE, instead. But for periodic cleaning, a few quick flicks of the wrist with clothes brush should get out a lot of the dirt and debris.

When you read about clothes brushes, you’ll often find people recommending Kent Brushes, a heritage British company that has been producing high-end brushes for nearly 250 years. I have two of their brushes: the CP6 and CC20, which are both natural cherrywood brushes made with 100% boar bristles. The main difference is that the CC20 is double-sided and designed with a slightly softer side for delicate fabrics such as woolen flannel. However, I find I rarely calculate which side is better for which fabrics. I also imagine that any difference will be effectively washed out by how hard you brush. If you’re cleaning a more delicate material, you’ll be fine with the single-sided brush if you simply brush gently.

I’ve owned my clothes brushes for about ten years now, and while I find they’re great for the usual task of knocking out dirt and debris, they’re less great for removing lint and pet hair. To be sure, they work, but you have to brush your garments for about the same amount of time as you would when doing a regular cleaning, which isn’t always the sort of “pick this up and go” effort that you’d want out of a lint remover.

That said, if you wear tailored clothing, you need a clothes brush. Kent is the most often recommended, although you can also find affordable alternatives from Valentino Garemi, Abbeyhorn, and Bürstenhaus Redecker. The Armoury has two Japanese-made garment brushes, one of which is small enough to pack for travel. The Hanger Project also has garment brushes across a range of price points, while Mr. Porter sells one from the Italian luxury company Lorenzi Milano. Over at Permanent Style, Richard Anderson and Brian Lishak show how you can brush down a garment. 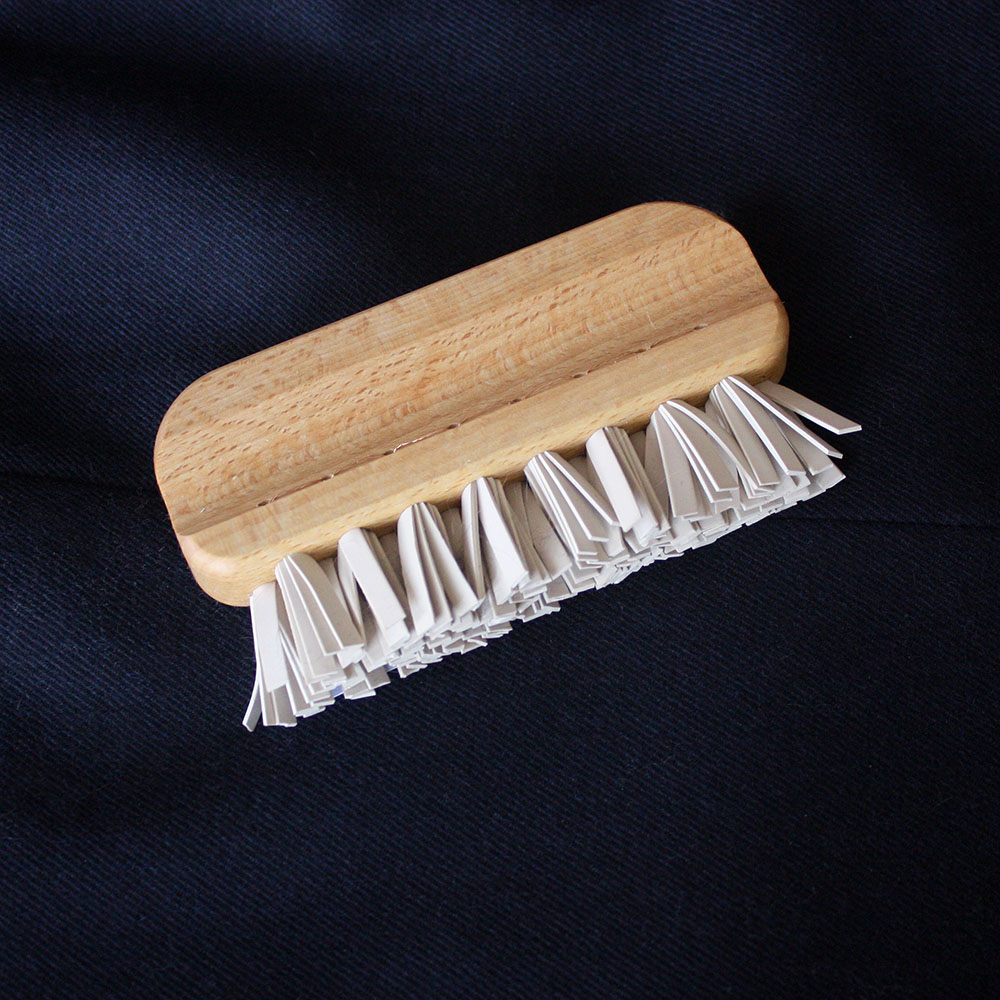 Based in Germany, Bürstenhaus Redecker has been manufacturing high-end brushes since 1935, often combining natural materials such as oiled beechwood, goat hair, horsehair, plant fiber, and rubber. I mostly like them for their designs. Their website reads: “Today, the name Redecker has long stood for a skillful combination of naturalness, function, and design. It stands for an extraordinary mix of innovative mentality, solid craftsmanship, and creativity. We always place a high value on our products, not only in being practical but also beautiful and, most of all, ecological.” Very Goopy.

Unfortunately, this brush sucks. The rubber bristles are supposed to pick up lint, dandruff, and especially animal hair using friction and, I guess, some kind of magic. But I found it’s too gentle to be effective, and it’s difficult to grip (perhaps their bulkier model or Grove’s rounded lint brush would be more comfortable to hold). On the upside, it’s gentle enough for very delicate fabrics, such as cashmere-blend jackets and doeskin, but you still have to give it a few passings before things come off. At $27, this one of the more expensive options. It also feels more like an accessory you put in a perfectly curated, artisanal broom closet, rather than something you use for daily life. 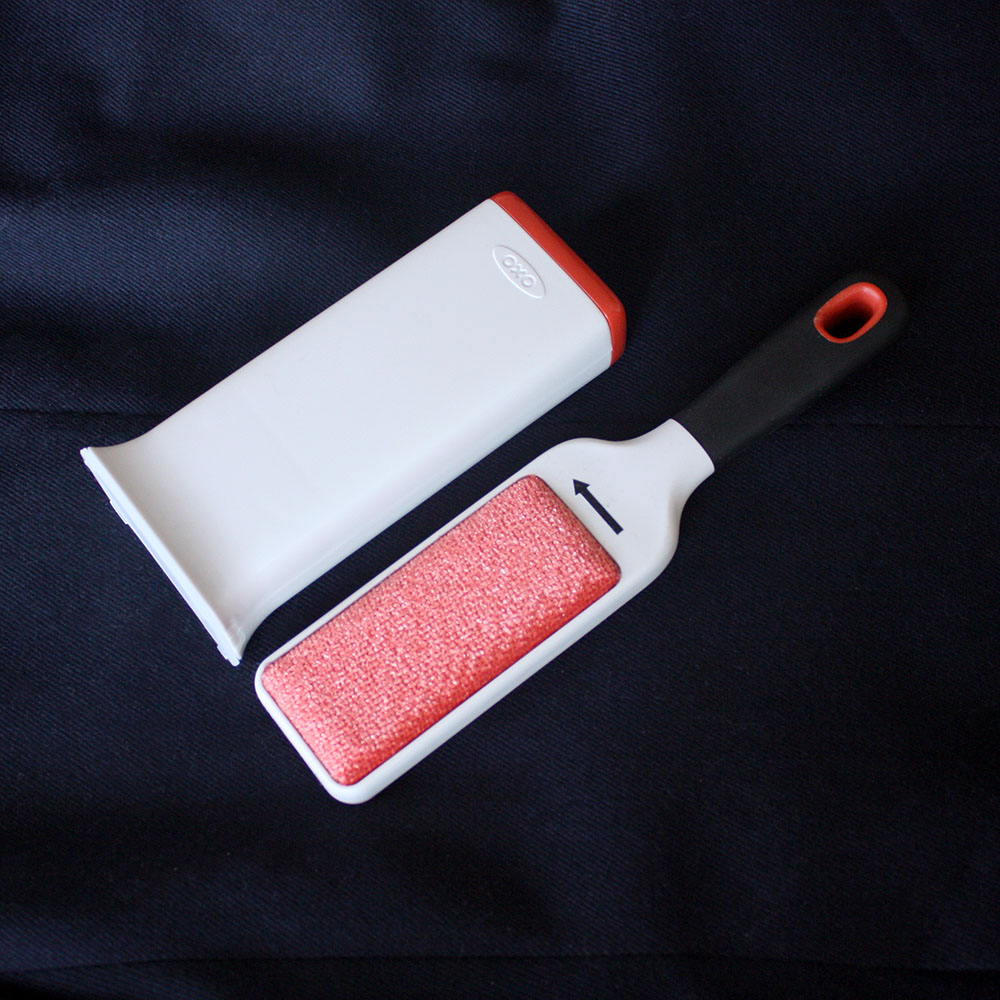 In the last few years, the market has been flooded with lint rollers and pet hair removers designed with the same velvety fabric. ChomChom uses the material in a back-and-forth roller that you have to use so violently, it clacks. Zelta has the material on what looks like a hairbrush. So far, the best I’ve seen is from OXO, which comes stationed in a base that doubles as a cleaner. The interior of the base is lined with the same fabric, which cleans the brush when you insert and remove it. (There are plenty of other makers for this same design if you search Amazon).

The fabric has tiny bristles that point in one direction, not unlike the quills of a calm porcupine (although, much gentler). When you brush the fabric with the grain, it feels smooth and velvety. When you brush it against the grain, you can feel the little spines, which are designed to pick up lint, dander, and pet hair. OXO’s design is helpful in that there are small arrows that point in the direction you must use.

I found this brush works best on densely woven, hard finished fabrics, such as moleskin, corduroy, and most worsted suitings. When you use it on a napped fabric, such as woolen flannel, it takes off too much of the cloth’s surface. It’s not even usable on a prickly Shetland or Harris tweed because the bristles get caught on the fibers. On the upside, I find I only ever really need to use lint rollers on materials such as moleskin and corduroy anyway. On napped flannel and tweeds, you don’t really notice lint. When this works, it works exceptionally well, as it takes fewer passes to effectively clean a surface. 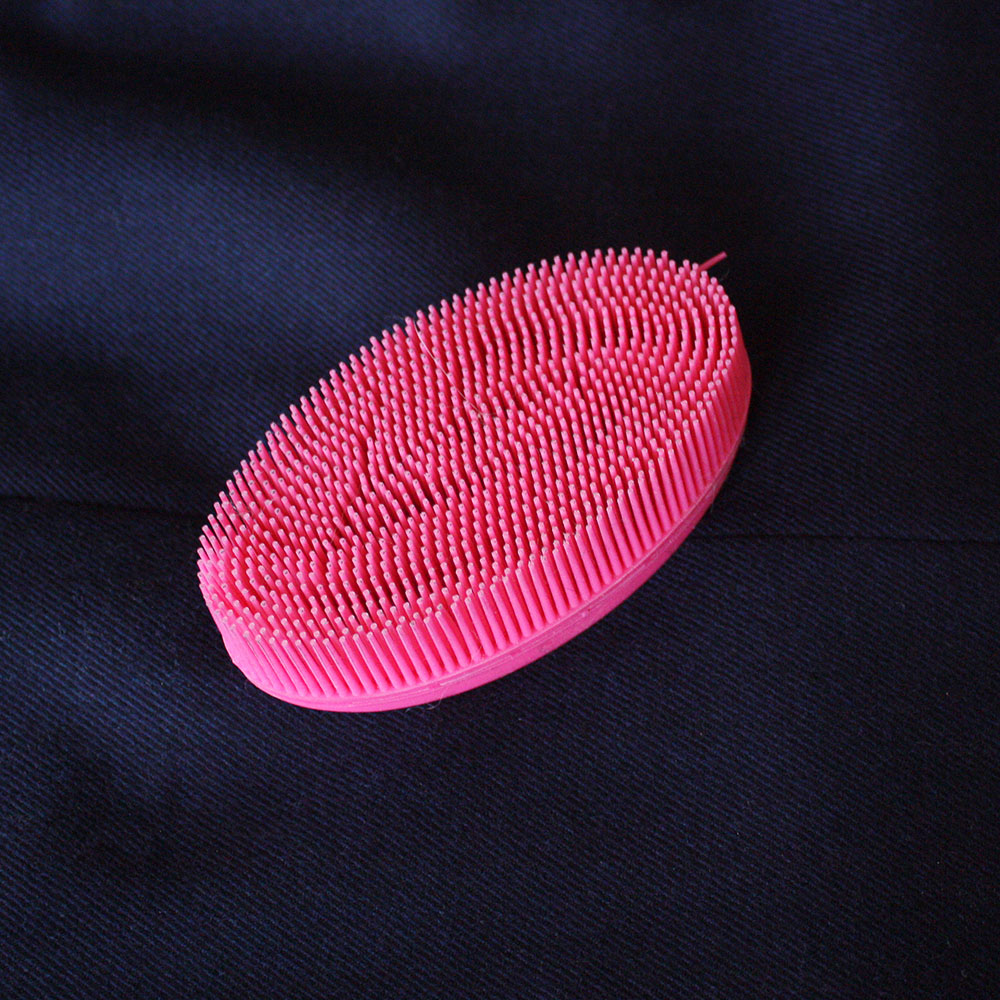 There are dozens of companies nowadays making specialized pet fur removers, which you can find at your local pet store or online suppliers such as Chewy. This one from Evri is pretty simple. It’s a rubber injection molded brush with dozens of one-inch bristles. It’s cheap, effective, and comfortable to hold.

Unlike OXO, it works across a wide range of fabrics since you’re essentially just brushing something down with a bunch of tiny rubber bristles. It also, for some reason, seems more effective at removing lint and pet hair than a standard clothes brush. However, it’s also a bit harsher. When brushing down a moleskin jacket, I noticed the brush was picking up a lot of the cloth’s nap. Given what it does to a cloth’s pile, I don’t know if I would use this on high-end tailoring. But for affordable, daily items such as hard-wearing chinos, this would be good if you don’t want to spend more than $5. 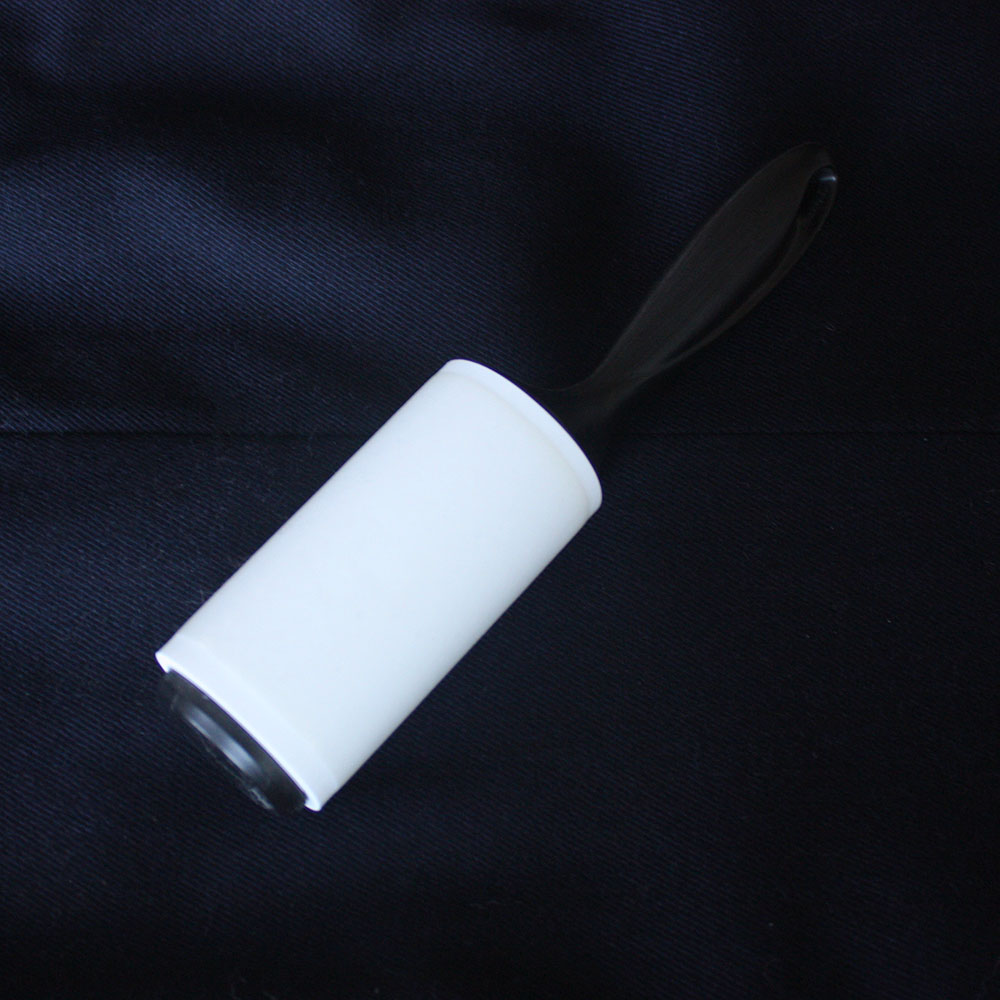 Finally, we have your standard lint roller. I originally went in search of a better option because my clothes brush wasn’t as useful for picking off lint, and a lint roller seems environmentally wasteful. Some options, such as Sticky Buddy, are basically rubberized lint rollers that promise not to create any paper waste. But with reports that you have to spend a lot of time and water to rinse them off, I wasn’t sure if they’re that much more environmentally friendly.

In the end, I’ve found that lint rollers are your best all-purpose lint remover (sadly). But depending on your needs, they can be expensive and wasteful. If you, like me, want something that doesn’t result in piles of paper waste, I think OXO is your best option. Those velvety solutions are good for the most challenging fabrics — as mentioned, fabrics such as moleskin and corduroy — and they’re easy to clean. If you’re working with napped fabrics where the fibers run in different directions, such as spongey tweeds and woolen flannel, then you may be better off with a clothes brush and/ or a lint roller.

For me, I’m using a clothes brush for regular cleaning, OXO’s lint remover for tough, hard finished fabrics, and then the occasional lint roller on delicate materials. A realistic expectation for how clothes should look in daily life will take care of the rest.