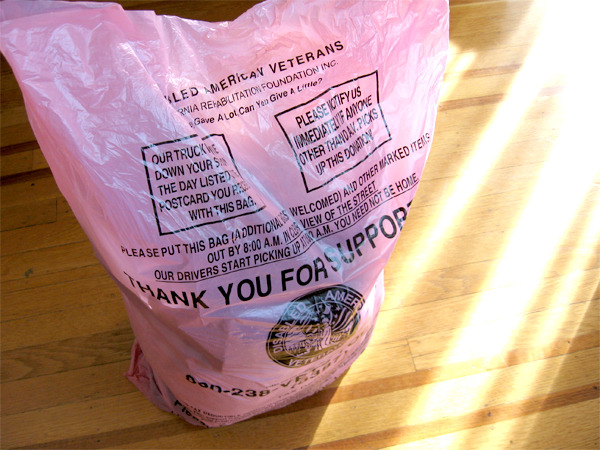 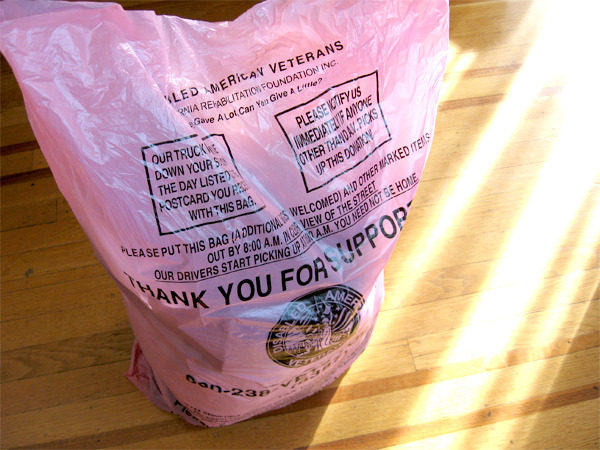 I spent the better part of yesterday cleaning out my closet and filling up a donation bag for the Disabled American Veterans. I have a ton of clothes that I no longer wear – some because they’ve become too faded, others because they’ve been replaced with things that I like more. Some of my old clothes have been sitting in a box because I always thought I was going to do something with them, but last week I finally came to terms with the fact that I was never going to get around to it and they might as well go to a good cause.

I suspect many readers here are in the same situation. We have piles of perfectly wearable clothes that we no longer use for whatever reason, and it mostly just sits around creating clutter. We all know donating them is the right thing to do, but often have an excuse or two for holding on to our stuff.

For myself, I thought for a long time that I would sell them on eBay or something. Some of the things I know will sell for pretty good prices, but there’s a lot of stuff that I know won’t. For those, I realized they’re just not worth my time to list, pack, and ship them. Plus, I get a tax deduction anyway for dropping off my clothes at a charity (as long as I remember to get a receipt).

I also thought for a long time that I would eventually wear some of these things, and it would be good to keep them “just in case.” As everyone says, however, if you haven’t worn it in a year, you’ll probably never wear it again. It’s just unrealistic that I would ever pull out any of these things when there are pieces in my closet that I like much more.

I also thought for a while that it would just be too much work. I don’t have a car and carrying this stuff on public transport seemed kind of a pain. I did some quick Googling, however, and found this site. You can just go on there, plug in your zip code, choose a charity, and the site it will help you schedule a pick-up. In my case, the Disabled American Veterans sent me a bag and they’ll come pick it up on our agreed upon day.

So for this weekend, I challenge you to do the same. Since, for some inexplicable reason, it never feels right to throw away clothes, here’s a chance to clear out some space in your closet and do some good. The new space will help keep your better garments in shape, and perhaps leave room for some nicer purchases in the future.