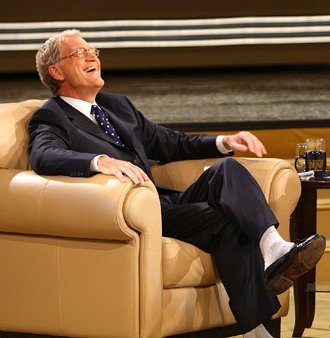 If you want to see a nightly lesson in how a suit should fit, watch The Late Show with David Letterman.

Now – I’m hardly an unbiased observer.  Letterman is, in my book, The Greatest American.  The fact, however, remains, that Letterman’s suits are consistently beautiful.

When Letterman held down the Late Night slot on NBC, he dressed pretty casually.  He was often seen in a baseball jacket, or an oxford shirt.  He often went no further than a blazer and rep tie.  He was relaxed and his only style was a rejection of the previous late-night-host expectations.

When he moved to CBS, however, he reset his style.  He understood that he was upholding a tradition exemplified by his hero, Johnny Carson, and that a gracious late night host wore a suit.

I don’t know who makes Letterman’s suits, but they are consistently impeccable.  I’m not always crazy about the shiny, high-thread-count wools he chooses (particularly on camera), or the all pinstripes.  They always, however, fit.

Of course, Letterman’s style isn’t perfect.  He invariably wears a white shirt, which does his complexion (and his cameramen) no favors.  He has an annoying habit of leaving his jacket open while standing – even on double-breasted coats – which makes him look slovenly and out-of-shape.  (This couldn’t be further from the truth, by the way – he’s a strapping, athletic guy.)  Worst of all, he insists on wearing loafers with his suits… and (ick) white socks.  That’s charming with chinos in Take Ivy, but untenable on network TV.

BREAKING: Rob informs me that Letterman’s suits are made in New York by Leonard Logsdail.