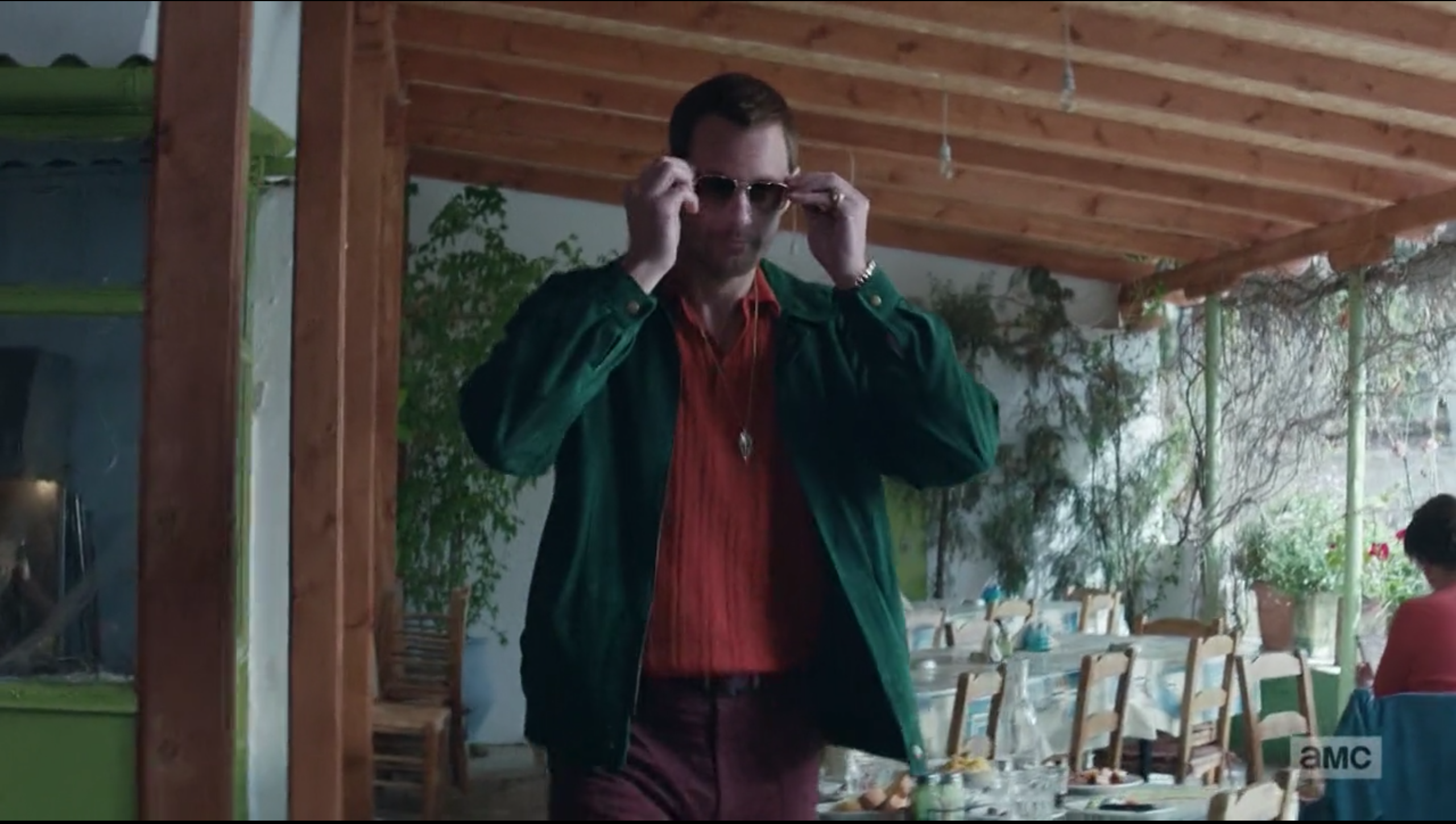 Spies get the coolest clothes. Well, handsome spies anyway. AMC/BBC’s new adaptation of John Le Carre’s 1983 novel The Little Drummer Girl is one of the more visually stylish shows or films I’ve seen in a while, following a team of counterterrorist operatives across late 1970s Europe, from London to Greece to Munich. Two reasons this isn’t surprising: Le Carre books tend to lend themselves to well-dressed films–Tinker Tailor Soldier Spy and the recent series The Night Manager come to mind; and Drummer Girl was directed by Park Chan-wook, the guy behind Oldboy and Lady Vengeance, among others, which are brutal but beautiful films.

Spoiler alert:  I have not yet finished Little Drummer Girl and don’t intend to spoil anything in this post, but the images below do depict characters together who aren’t together at the outset of the series.

The characters’ wardrobes are distinctly 1970s, in ways both emulatable and badly dated. There’s not a lot to love about the tailoring on display–slightly wide lapels, variably striped shirts, and polyester ties for Michael Shannon’s grim Martin, the leader of the crew. But the casual stuff looks great, and I was particularly struck by the clothes of the character played by Alexander Skarsgård. While in Greece, he’s shown in vacationwear that could be right out of a Camoshita lookbook.

Camp collar shirts in gold and beige and washed blue linen, textured polos in burnt orange, burgundy trousers, topped off by a suede jacket in emerald green, and accessorized with gold jewelry. It’s like Gucci before Gucci meant bedazzled snakes. In other contexts, he wears a fitted striped linen shirt with no collar, and a perfect denim western—pearl snaps and yoked back, with a honkin’ collar. It’s essentially a capsule casual shirt wardrobe for the entire year.

There’s also great aviator glasses, thick-framed eyeglasses, long-ish leather jackets in shiny leather, some alarmingly tight trousers, and a lot of hair. Plus a terrific red Mercedes 230E. All this semi-glam surface aesthetic is the setting for a complex, tense drama about the narratives the characters base their moral decisions on, and the performances they maintain, both to fool their counterparts and to sustain their own views of themselves.

The whole series is currently streaming on AMC, broken into three 2-hour episodes. 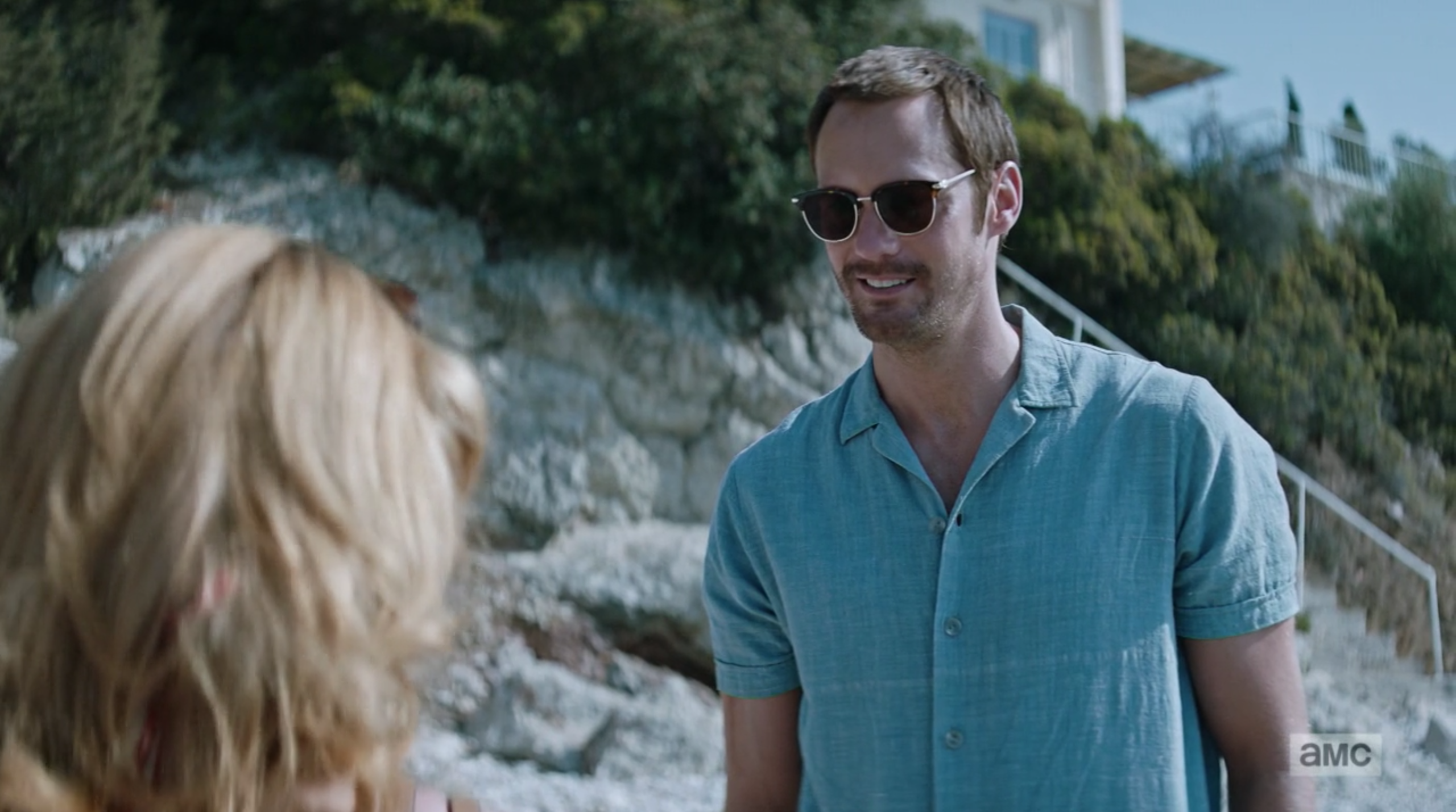 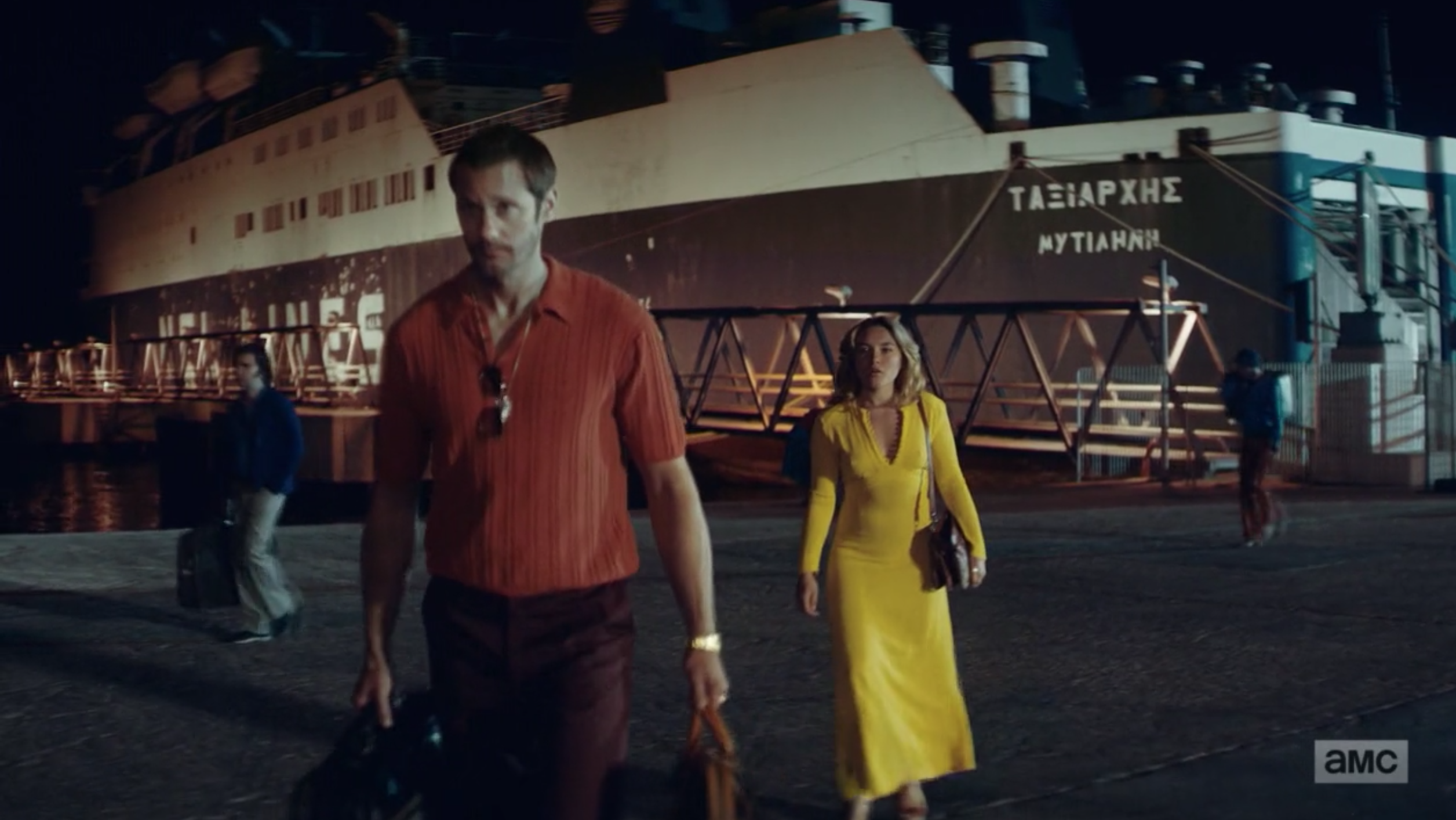 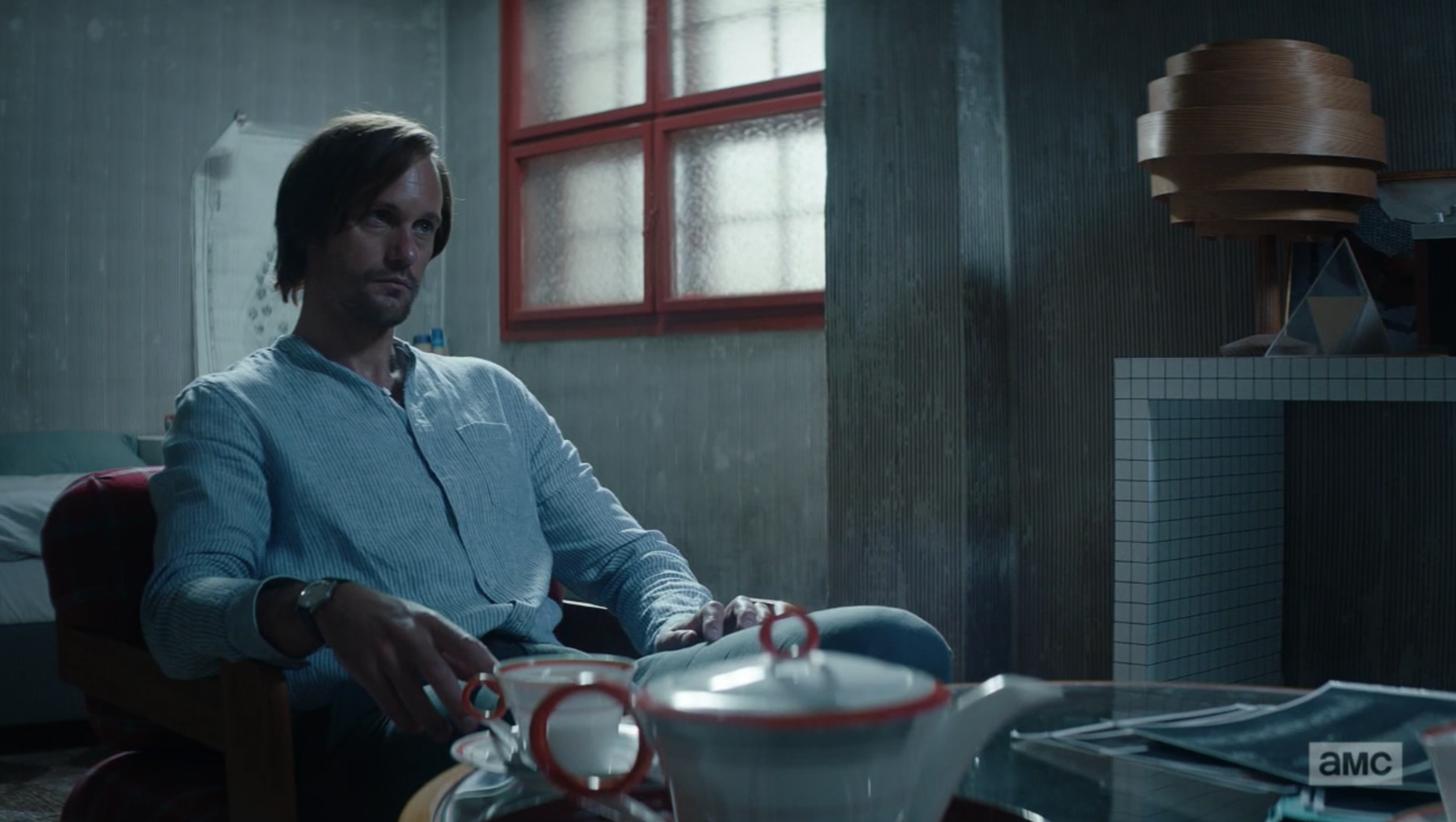 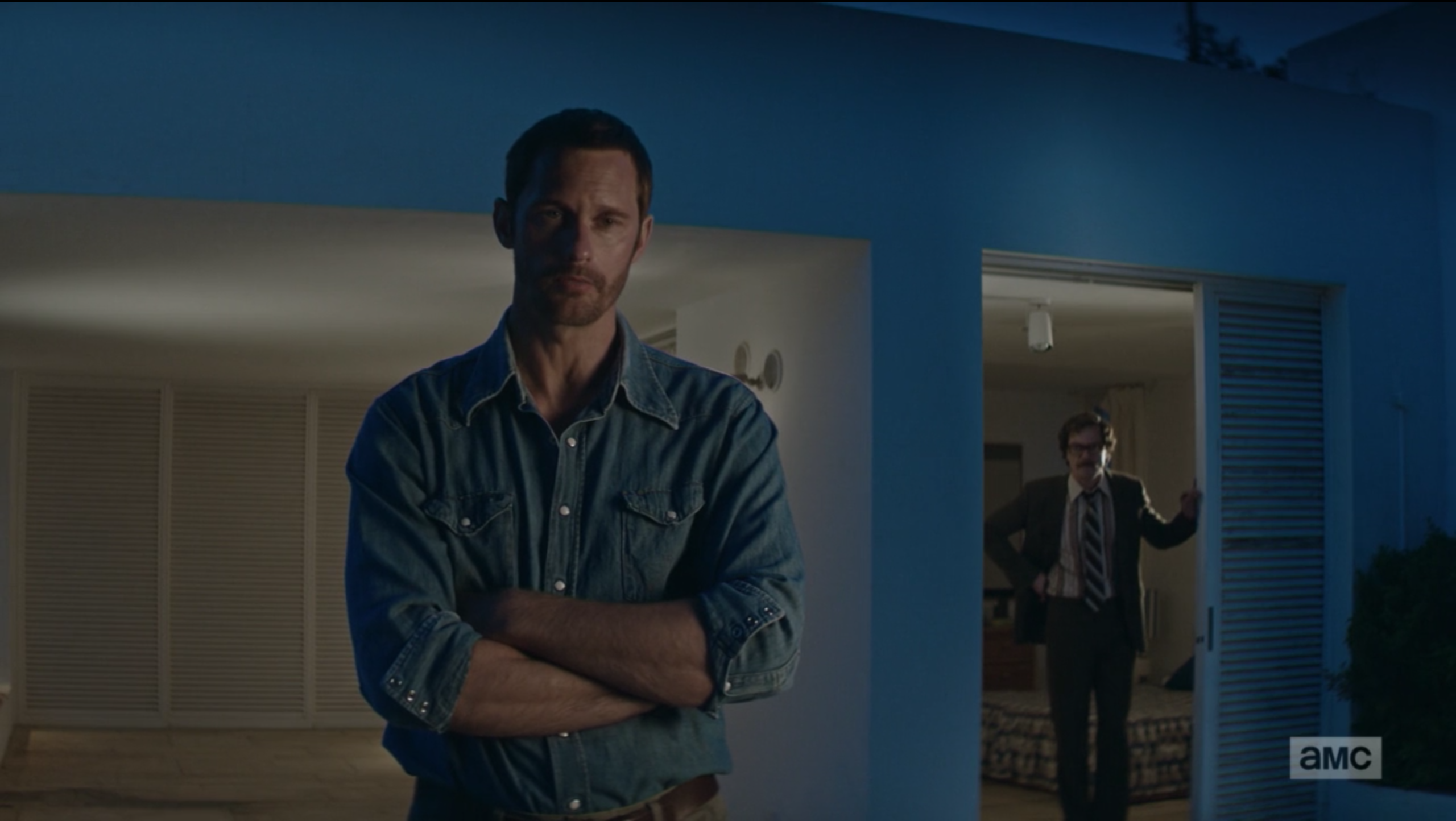