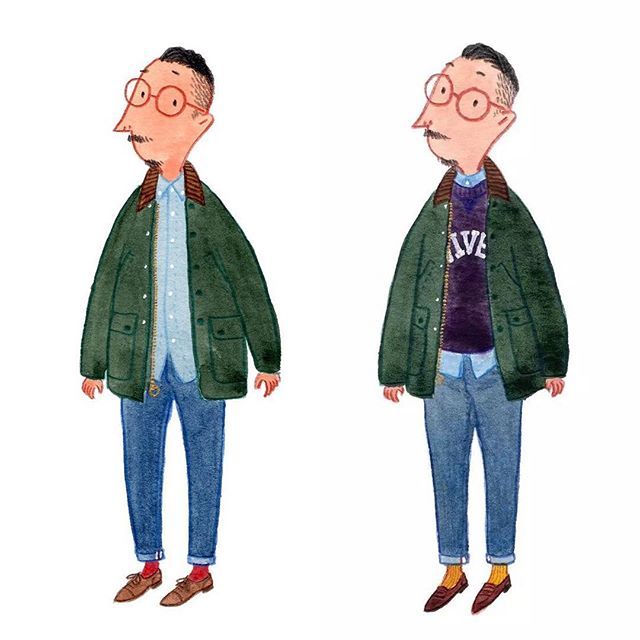 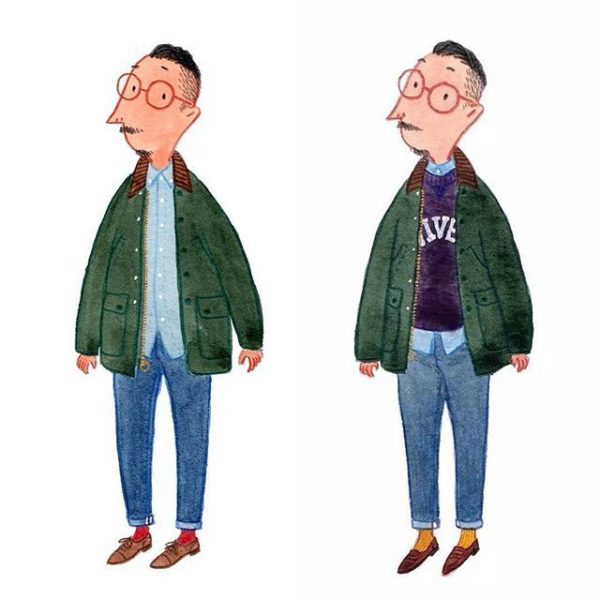 For a long time it seemed like the only menswear illustration you saw was vintage Apparel Arts men and Free & Easy’s smirking Steve-ish McQueens. Now we’re getting new perspectives like Ryan’s and Graeme’s; likewise, Fei Wang’s retro-styled, two-dimensional portraits, posted to his Mr. Slowboy Instagram, are a breath of fresh air. Wang uses pencil and watercolor on paper to create vivid depictions of style he appreciates (mostly men’s) and some specific personalities you may recognize. His art is deceptively simple and sneakily sophisticated–with just a few lines he really captures silhouettes and character. This isn’t an accidental talent; Wang is Head of Art for an advertising agency and trained seriously as an illustrator.

Part of the appeal of illustration (vs photography) is the ability to itemize and harmonize the clothing involved–removed from the need for fidelity to the real thing, the images are free to represent the ideal, and therefore can be more practical inspiration for menswear combinations than, say, street style type photos. After we posted some of Wang’s art last month, I talked with the artist about his work and his inspiration.

Hey Fei! How did you get into illustration?
I majored in graphic design in college and then soon got into advertising
as a creative, so my day job is actually the Head of Art and creative
Director of OgilvyOne Beijing. However, I’ve always been passionate about
illustration, even it’s just a hobby thing, but I take it seriously
besides advertising.

Were you hired to illustrate men’s
clothing or is that just an interest that happened to intersect with
your talent for art?
The start of my fashion illustration was quite random–I was encouraged by
my colleagues to launch a blog on social network to share my experience
and knowledge on men’s fashion, as I’m quite conscious about it in
everyday life.

Writing is quite boring and I’m not really good at
writing either, so I decided using illustrations to get my message
across. 4 months later, a fashion editor from Esquire China
contacted me and asked if I was interested to do a series of
illustrations for them during London Fashion Week, at that moment, I
thought I was on the right track.

Why “Mr. Slow Boy”?
I’m a slow person, slow on almost everything. I’m always the last one who
get the joke among my friends.
Also, I like slow fashion, in another word, classic. I think it’s great
to be one or two steps behind the trend.

Likewise! Although often it’s not intentional. Have you always been a sharp dresser or is it something you came to later? Who were your role models for style?
No, not at all; I used to be a follower of celebrities, like movie
stars, singers, football players, even manga characters, believe me I
tried to dress like Son Goku (a half monkey, half man alien) in “Dragon
Ball” with my own wardrobe. I became less “strange” when I got into
college and started reading Japanese street fashion magazines such as Boon, Street, Mens Non-No, etc., Snap shots was my favourite
section, all the people in the pictures were my role models, I learnt
from everyone. Now I quite like Michael Hill, the co-owner of Drake’s
London, I think his style has a mixture of impeccable sartorial elegance
and an interesting British down-to-earth conservativeness.

Do you only draw people like that, whose style you admire?
I love to draw those people who have styles, their own styles, not just
fancy clothes or typical flamboyant Pitti peacocks, also, very
important, they need to have characters and personalities which I
admire.

Any particular people you’ve enjoyed drawing?
Ha, I love to draw myself, because I know myself the best.

In your own personal style, do you have a personal “uniform”? Like an outfit or combination you always go back to or trust?
Most of the time I wear white Black Fleece (so sad the collection is ended) shirts with grey or navy crew neck pullover and corduroys. White and blue stripe oxford shirts are something I can’t live without, because they are so essential and functional, easy to wear and almost as neutral as you can match them with anything—also they are clean and neat, not so formal, but never sloppy.

In addition to his off-the-cuff Instagram-posted art, Fei is currently working with Lock hatters and Ethan Newton’s Brycelands on commercial projects. Thanks, Fei!