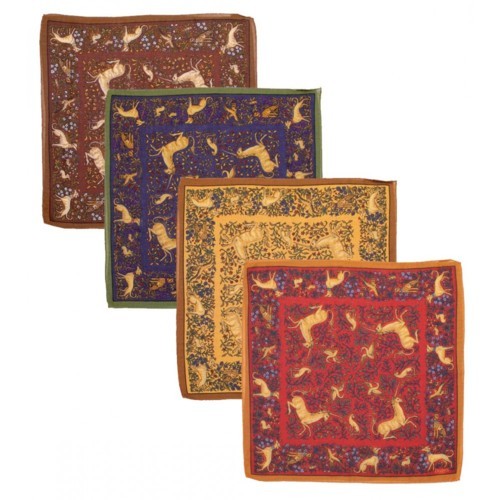 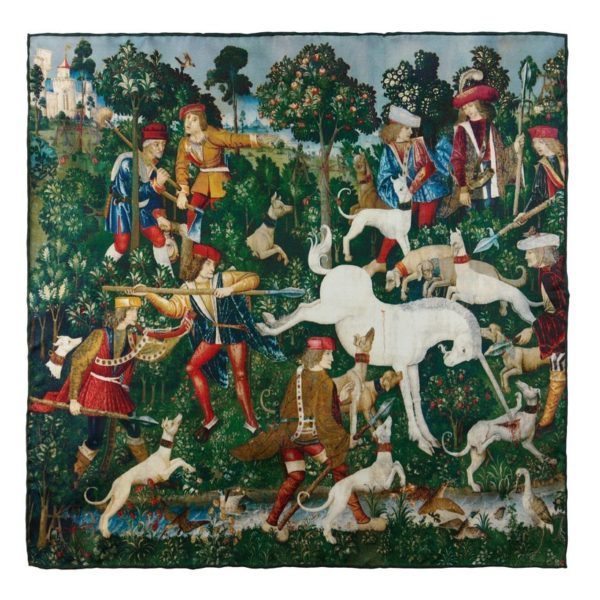 Unicorn-print accessories, like Lisa Frank stickers but for men, have enjoyed a good couple of years. Pictured above are Drake’s tonal printed pocket squares (derived from La Dame à la licorne; not currently available) and Kent Wang’s more colorful version, based on the Verteuil Tapestries).  Reginald Jerome de Mans has talked about the history of these accessories with Drake’s and Hilditch and Key going back to the late 1980s, but what about the history of the unicorn itself? And why are we keeping ol’ one horn in our jacket pockets?

Annalee Newitz talks about the evolution of the unicorn myth via Chris Lavers’ 2010 scholarly study of unicorns through history:

As Lavers explains, the original Hebrew text of the Old Testament mentions an animal called a “reem.” When scholars tried to translate this word into Greek, they were flummoxed. They had no idea what this “reem” was. They knew it was big, and it had horns, and that it obviously wasn’t a goat. (Goats are mentioned elsewhere in the Bible.) So they translated it as “monoceros,” meaning “one-horn.” Then, when the Greek Bible was translated into Latin, the word became “unicornus.” And that word, translated into English, is unicorn.

Early in the 20th century, when scholars cracked the code on ancient cuneiform script, they finally learned what that mysterious reem really was. In these ancient texts, written around the time when the Hebrew Bible was being penned, there are many references to an animal called a rimu. Like the biblical reem, the rimu was enormous, strong, and had horns. That animal was an ox. So all of those references to unicorns in the Bible? Those are actually to an ox. Which, if you read the actual sections of the Bible, makes a lot more sense.

But for nearly 1500 years, Christians believed in the unicorn version of things. The unicorn came to symbolize Christ, its horn the cross, and its tribulations during the hunt were like Christ’s tribulations on earth. Interestingly, the idea that unicorns were attracted to virgins comes from a pagan source. A Latin book called the Physiologus, probably written in the second century CE, mentions that a unicorn can only be caught when it lays its head down in a virgin’s lap. Christian analysts seized on this idea, suggesting that this was symbolic of how Christ came into the world – with the help of a virgin. Keeping all of this in mind, it’s easy to understand what those 16th-century unicorn tapestries are all about.

Next time you’re decorating your Trapper Keeper or tweed patch pocket, think of the mystical beauty and profound majesty of the ox.