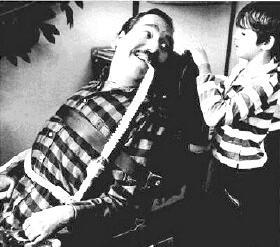 I’ve written a bit about my father’s late best friend Ed Roberts on this blog, and the importance of the work he did advocating for the independent living movement for the disabled. Today I got a note from Robert Blanco, a legislative aid to California State Senator Loni Hancock about Ed. Ed’s birthday was recently made a state holiday, and a resolution to make it nationally recognized was recently passed in the House. Senator Hancock is putting Ed forward to be included in the California Hall of Fame, and they asked me to write a letter in support of him.

Below is what I wrote. If you’d like to write a letter, you can address it to:

Dear Members of the California Hall of Fame Committee,

I hope you will consider one of my personal heroes for the 2011 California Hall of Fame induction class: Ed Roberts.

Ed was a brave man. Faced with a tremendous physical disability – he was paralyzed from the neck down with the exception of one finger – he decided not to capitulate. He decided to fight. First he fought for himself, ensuring he could graduate from high school and attend college at UC Berkeley, then he spent his life fighting for others who were physically challenged.

I’m a public radio host, and my work (largely interviewing arts and culture figures) couldn’t be further from social activism. I happened to mention Ed in passing on my blog, and I received half a dozen letters from young disabled people for whom Ed is a hero and role model. What these folks told me was that Ed inspired them to stand up for themselves, to do the extra work to claim a full and rewarding life, despite their disabilities, and despite the lack of understanding in the able-bodied population. Further, they told me that he inspired them to fight peacefully, with compassion and never with violence.

Ed is of particular importance to me, because I grew up with him. He was my father’s mentor and best friend, and I spent many weekends at his house in Oakland as a child. In fact, my father was married to my stepmother at that house – I don’t remember it, but everyone tells me I told a joke as the wedding party proceeded into Ed’s living room. Maybe I have Ed to blame for my career in entertainment.

I don’t think that as a kid, I quite grasped how remarkable Ed was. He used to give me rides on his wheelchair, and we used to sit with him in the disabled section of the Oakland Coliseum to watch A’s games. He seemed like a normal guy to me. What I didn’t know about was the fight that he led to make those “normal” activities possible for himself and for hundreds of thousands of people around the country. He spent his life fighting to give people with disabilities the opportunity to live thier lives with a little less fighting and a little more normalcy.

That central idea – independent living – was so important to Ed. Ed never took any mess from anyone, and he always took care of business. Every battle he fought was in the hopes that his friends and colleagues and the folks who came after him would have the chance to live their lives without fighting those battles. He truly made the road by walking. Or, in his case, rolling.

Ed’s birthday was made a holiday in California recently, and I can’t begin to tell you how important this was to the community he fought for and with. I hope this honor will have the same wonderful effect, and perhaps will inspire future leaders of our great state.

We should all be a little more like Ed, who believed that everyone deserved a full life. I’m sure he’s giving people wheelchair rides in heaven right now.