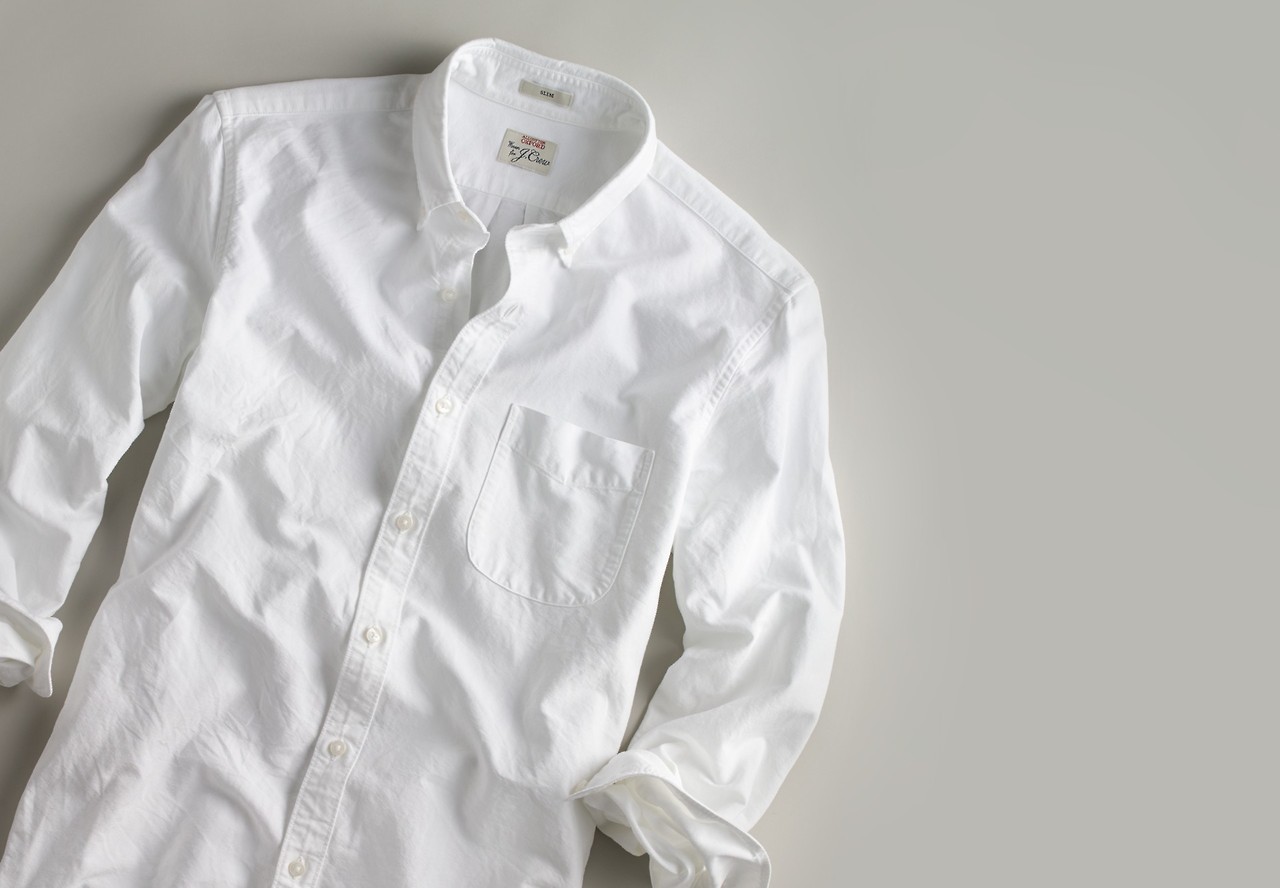 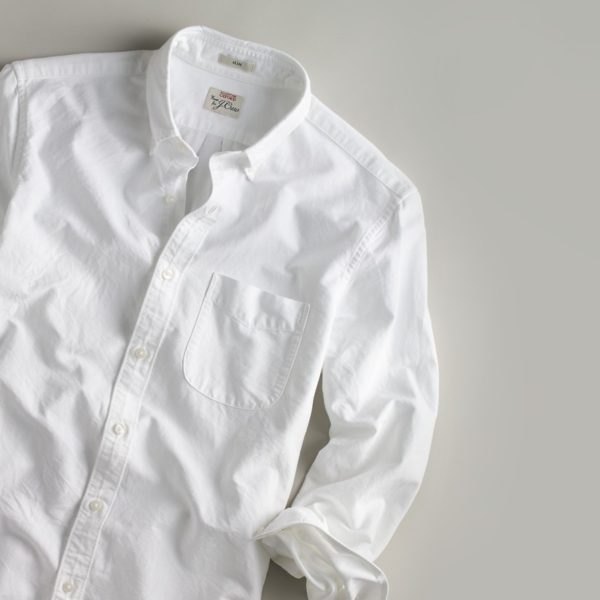 Today, guys have more options for a decent oxford button-down shirt than they did a decade ago, but few seem to meet to the standard of casual American cool we associate with the design. And those that do are often expensive (Brooks Brothers now sells the basic oxford for $140) and/or otherwise not super accessible (Mercer is a favorite but it can take some communication to get what you want). So we were excited to see J. Crew touting a new OCBD, modeled on “hand-me-downs from long-shuttered men’s shops,” for a relatively reasonable $64.50. We like J. Crew overall, and J. Crew shirts have a rep for being decent but having wee collars.  So have they made a new contender for wallet-friendly oxford?

In my judgment, this shirt is not the prince that was promised. After trying the shirt on in several fabrics and measuring it up against oxfords I like, I found it to be an OK shirt, which is pretty much what J. Crew was making before they started talking about the oxford as “iconic staple of late ’60s collegiate cool.” My detailed review follows, but I can tell you that as soon as I put the shirt on I knew it wasn’t quite what I was hoping for. To be fair, it’s a step in the right direction and for guys who don’t fetishize 60s OCBDs it could be a reasonable, modern fit.

So what separates a good OCBD from a mediocre one? When Derek reviewed a range of oxfords a few years ago, he considered fit, fabric, and price, but a significant consideration was the collar design. People who care about such things often point to old (pre 1990s or even older) Brooks Brothers shirt collars as the ideal design, before Brooks tamed it with a fused interlining that made it a little easier to care for (easier to iron, more likely to hold up over the course of a long day, in my opinion) but lost something of the scruffy charm of a simple, unlined collar. (Brooks Brothers last year redesigned their basic oxfords to more closely mirror their old shirts–no chest pocket and no longer a lining in the collar or placket. The price also went up significantly.)

J. Crew says their new collar is longer and unlined “like midcentury shirts.” The collar is slightly longer than recent J. Crew collars–I measured a collar point of about 7 cm on the new oxford vs a hair under 6.5 cm on a J. Crew buttondown I bought last year (all measurements on a size L). The collar overall is also a tiny bit taller (millimeters). These are significant but not drastic changes–for comparison, the collar point measurement on a new Brooks collar is closer to 8 cm. And while a Brooks collar (and other “trad” makers, like J. Press) is shaped with a relatively acute angle at the collar point, J. Crew remains a little blunter, with a straighter line from the collar band to the point, resulting in a less pronounced curve of the collar when buttoned.

For what it’s worth, most of J. Crew’s shirt collars are unlined or very lightly lined, so that doesn’t seem like much of a change (their Ludlow oxford, designed to go with their tailoring, is in fact lined, and stiffer).

The new J. Crew oxford features a box pleat in the back, which is a traditional oxford detail but also found on most button front shirts (vs side pleats or no pleats). There’s no winking detail like a locker loop, third (rear) collar button, or flap pocket to nod at the idiosyncrasies of oxfords from J. Press, nor the shirred cuff detail of Brooks shirts–instead a pleat to narrow the arm at the cuff. A good oxford doesn’t need these extras, in my opinion; just noting that the homage to 1960s oxfords seems limited. J. Crew also says they’ve made the buttons smaller, which it seems they have, but to what discernible effect I’m not sure.

The fit is marked as “slim” and that seems about right–I usually take a size L or 16/34 and I was comfortable with the fit in the shoulders, chest, and waist. Neither darted-Italian-shirt slim nor “traditional fit” baggy.

I liked the fabric J. Crew is using–it’s got a slight shine, unlike what I’ve seen recently from Brooks and J. Press. I did not wash the shirt, so I’m not sure if that will lessen with wash and wear. But all the fabrics J. Crew has chosen are attractive and distinctive–I mean, white is white, but the “raincoat” blue is a nice, deeper shade of blue than most current oxfords and the “authentic red” is a decent alternative to pink–in store, they also had a candy stripe.

Overall, I’d put the new J. Crew oxford in the same category as, say, Ralph Lauren oxfords. It doesn’t have the pedigree or details of the old school makers, but it’s also <$100, which they no longer are. The marketing copy may have been a little overstated, but the shirt is fine. J. Crew has the advantage of being broadly available, so trying one on in store to see if it’s right for you will be easy for most Americans, versus something like Kamakura, which I would say is overall a better buy, from a value and styling perspective.