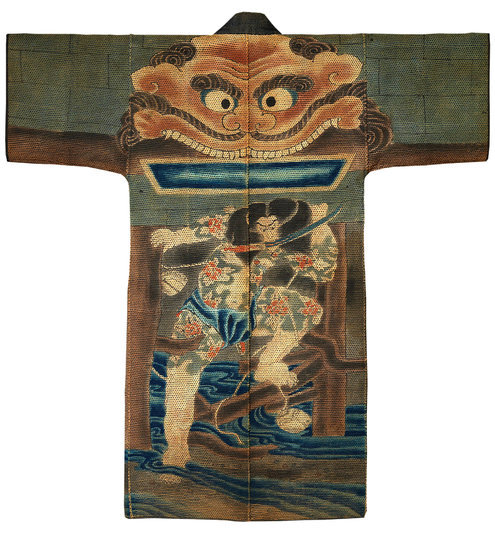 A bittersweet story in The New York Times recently. Textile historian Terry Satsuki Milhaupt was almost finished with her book on kimonos when she committed suicide in 2012. Her work was recently completed by her widower, Curtis Milhaupt. The book is titled Kimonos: A Modern History and an accompanying exhibit by the same name is happening at the Metropolitan Museum of Art. The New York Times has the story:

Ms. Milhaupt studied how kimonos over the last three centuries have revealed the wearers’ political leanings and cravings for westernization. The Met is filling galleries with clothing for firefighters, courtesans, actors and children in patterns including lobsters, demons, clouds and dewdrops. Paintings, photos and prints depict people manufacturing the textiles and sometimes opting instead for Western-style flounced gowns, tailored suits and bowler hats.

By the 1920s, Japanese men and women had started wrapping themselves in images of nightclub singers, cameras, train tickets and athletes. During World War II, warplanes, tanks, soldiers, machine guns, bombs and swastikas were added to the pattern options, even on toddlers’ outfits.

“The kimono has long served as a tableau on which to inscribe, describe and absorb the effects of modernization,” Ms. Milhaupt wrote.

For those who can’t get to The Met, there are several other kimono events happening around the country (and one in Japan). Again, from the NYT:

Three current kimono exhibitions run through Oct. 19: “Kimono for a Modern Age,” at the Los Angeles County Museum of Art, contains robes patterned with Sputniks, ice floes and penguins. The Art Gallery of Greater Victoria, in British Columbia, is offering a survey of kimono history, as well as a show featuring some of the possessions of the geisha singer Ichimaru. She changed fabric patterns seasonally, depending upon which flowers were in bloom, and her clothes also depicted her Tokyo neighborhood, known for its geisha trade. Next year, Mr. Weber will lend kimonos to the Asian Art Museum in San Francisco, the Museum of International Folk Art in Santa Fe and the Miho Museum near Kyoto, Japan.

Certainly sounds worth checking out.