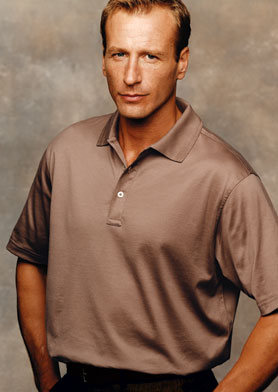 Emily writes: My husband works in an office job and has a basically set uniform of khakis and polo shirts with a swap out of cotton sweaters (with an undershirt) in the winter. I’ve encouraged him to wear button downs because I think they’re super cute on him, but he thinks they’re really uncomfortable – he has broad shoulders and button downs are tight across his chest and shoulders.

Is there something I’m missing that can get him out of this polo shirt hell but won’t be uncomfortable? I’ve thought of custom dress shirts.  Would they be worth it?  What are your thoughts?

How big is this husband’s chest?  The chest of the average American shirt is designed to fit someone of Kubiac-level hugeness.  The only time I really find that a too-small chest is a legitimate concern is for men with swimmer-ish athletic bodies – in other words, their necks are very small in proportion to their chest and shoulders.  Even then, it’s very rare, and usually the problem is more oversized waist than undersized chest.

If your husband does have a super-huge chest and a tiny neck, then custom shirts might be a good option.  More likely, though, he’s just making excuses because he doesn’t have the guts to wear something different from what he’s been wearing for years.  This is a sad, but all-too-frequent condition among men without style.  They think that just because they’ve committed to something it works for them.  They don’t recognize, in other words, that the things that have gone right for them (like meeting and marrying a nice girl) have gone right despite, not because of, their dress.  Then they make all manner of excuses to cover for this failing.

So: let this be a challenge, not just to Mr. Emily, but also to all of us.  NO MORE EXCUSES.  No more being Mr. Office Casual in an ill-fitting polo.  No more doing the minimum.  No more bitching that you’d rather spend the money on one more tier of cable TV or that it’s too hard to work a button instead just stretching elastic or whatever the excuse du jour is.  LET’S DO THIS.

Filed Under: Let's Do This, Q and Answer, Shirts