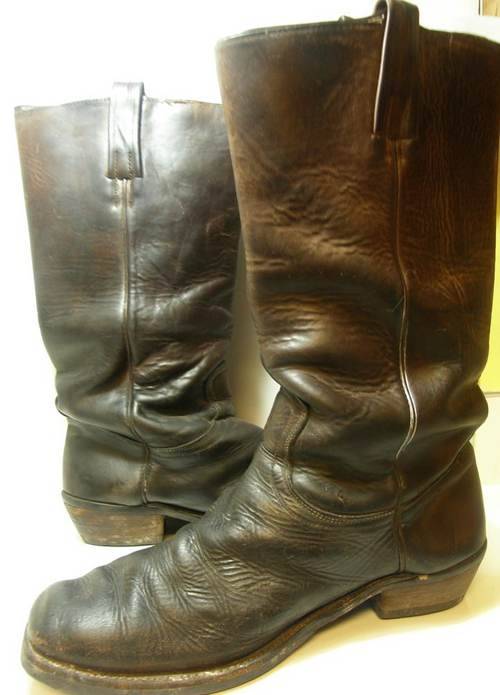 First, thank you very much for your website. I am a 31 year old Assistant Principal at a middle school in Southern California, and your site has helped me “hone” my style to balance professional attire and a little bit of fashion thrown in. I recently bought a 1978 Honda CB750F motorcycle, that I’m in the process of converting into a 1930’s cafe racer. I would like a pair of stylish “vintage” motorcycle boots to wear when I ride, but don’t want the Harley-style black tall boots. I’d like some leather work boots (steel toe optional), but with a distressed look. J Crew has some limited edition Red Wing boots that look great, but are $300. I bought my bike for $500, and would hate to be wearing riding gear that cost more than my bike. Any suggestions on stylish footwear for the gearhead on his bike? Thanks!

You sound like a pretty kick-ass middle school assistant principal.  My middle school principal drove a 1987 Civic hatchback and directed a girl in the lead role of a Kabuki version of Hamlet.

As for your question: good boots aren’t cheap, Wes, which is why those Red Wings come in around $300.  Red Wing does have a less expensive line called Irish Setter that would probably work for your purposes, and some bargain shopping could help you too.  I have a pair of those Red Wings from J. Crew which I bought last fall for about $125 on eBay.

Speaking of eBay, though, I think vintage might be your best bet.  Good boots are expensive – but they also last, so they’re plentiful on the used market.  You’re riding an old bike, and an old beat up pair of boots like these Fryes (pictured above) would be apropos.  Try searching for “engineer boots” or “work boots” and your size on what our pal Jimmy calls The Electronic Bay, and see what you can come up with.  What you buy may need some conditioning and perhaps even a few repairs, but they’ll have character that you can’t buy at J. Crew.