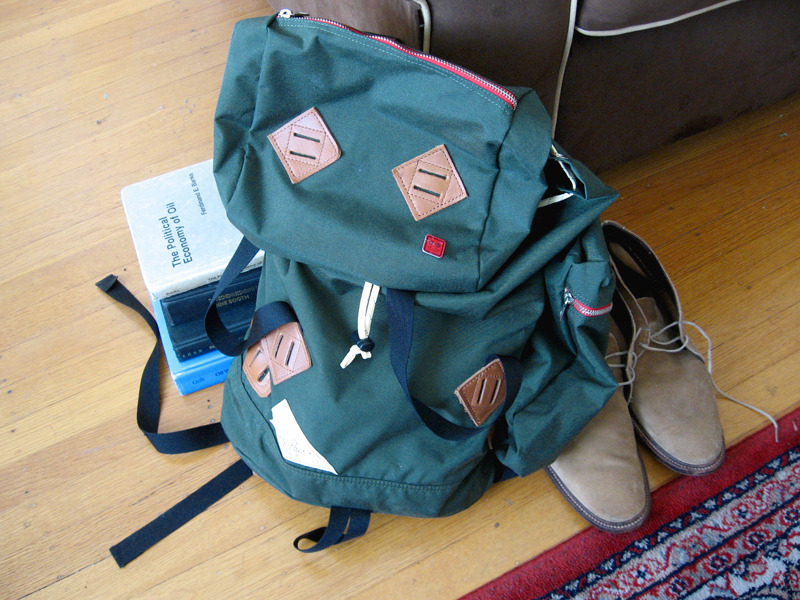 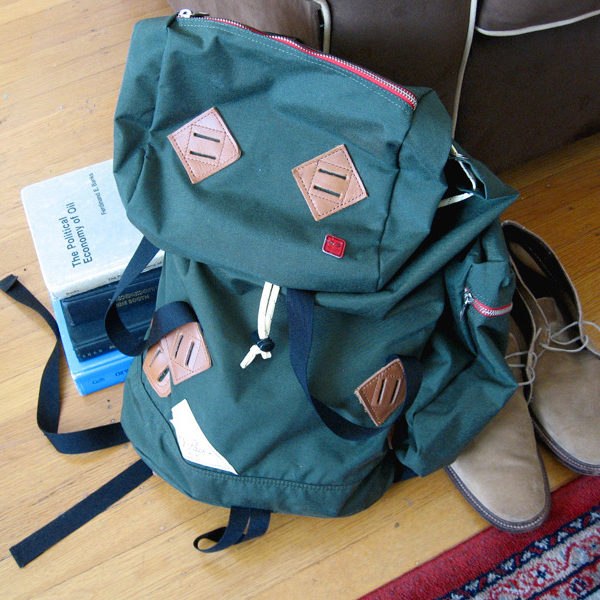 Although I typically use a soft, leather briefcase as my everyday work bag, it’s hard to get by as a graduate student without a backpack. Sometimes I just have a bunch of things I need to lug around, such as books or packages, and the larger compartmental space inside a backpack simply makes more sense. So a few months ago, I bought this green Kelty “Mockingbird” backpack after seeing a picture of Pete Anderson with it outside of a menswear tradeshow.

Most of Kelty’s backpacks are very practical looking – neither horrifically ugly nor very attractive. In the last few years, however, they’ve been releasing designs quite similar to those they had in the 1960s and ‘70s. As many know, this has been a response to the Americana/ outdoor gear fashion trend in Japan. It used to be that you could only get these bags if you were in Japan, or at least went through a proxy shopping service, but nowadays Americans can have their Americana as well.

Kelty’s neovintage bags stay mostly true to their original designs. They just have a few modern updates. For example, whereas the original Keltys used to have just one large compartment, this one has an interior pocket for your laptop (which fits my 13” MacBook quite well) as well as zippered pockets both inside the main compartment and in the fold-over flap that covers it. There are also detachable cylindrical pocket bags you can attach to the sides. I keep one on to hold a thermos I sometimes use when I go to campus.

My only gripe is that it’s somewhat of a hassle to open and close if you’re in a hurry. There are two metal ladder locks to hold down the fold-over flap, as well as a drawstring closure to keep the main compartment closed. If you’re running a little late, these can be kind of a bother to deal with, but I suppose you could also leave them open without too much danger. The fold-over cover should be enough to deter thieves.

Photos of the bag online make it look kind of silly, but only because they stuff it so much that it looks like some kind of mini-jet pack with thrusters on the sides. In practical use, I think it’s quite handsome. With its vintage inspired design, it’s obviously a fashionable backpack, but not one that looks overly fancy. It also allows someone like me, a 33-year old grad student, to wear a backpack without feeling like he’s on his way to social studies class.

(As an aside, Jesse was selling this amazing Japanese mountaineering backpack sometime last year. It sounded like it was too big for my purposes, but boy – did it look great).