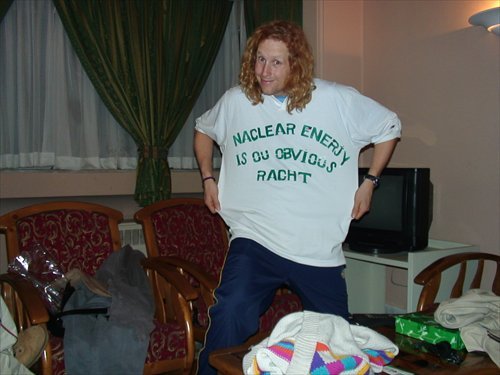 A year or two ago, one of my best friends, Tyler, decided that he and his friend Bobak were going to run across Iran, making friends and making a documentary film about their journey.  It was to be a sequel of sorts to this film, Kintaro Walks Japan, which Tyler made when we were in college.  Tyler is the least political person on Earth.  He is all about giving people hugs.  He isn’t even political in a hippie way, where he wants world peace.  He just wants to meet pretty girls and make friends.

A few days into their trip, they were detained, and told they would be kicked out of the country.  Because Bobak is Iranian-American, they had some cred, and they convinced the officials that they just wanted to be friendly.  So, in the spirit of international cooperation, the officials said they could continue their run – if they wore some special t-shirts.

Needless to say, they were booted from the country shortly thereafter, and the controversy over Naclear Enerjy in Iran continues to be a hot-button topic.