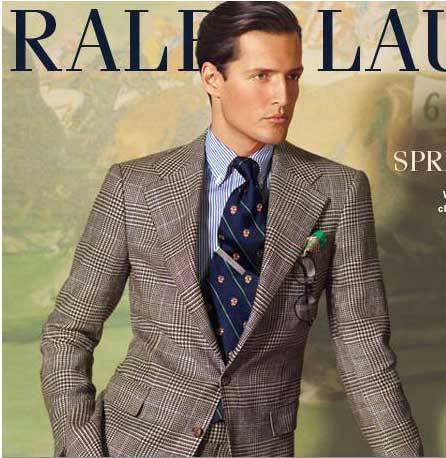 Saw this photo in an advertisement in this month’s Esquire.

After a few years of Mad-Men-ish narrow ties and lapels, it’s refreshing to see Polo’s lapels blossoming outward.  It recalls their heyday, in the mid-to-late 1970s, and to my eye, it looks decadent and luxurious and just great.

Of course, everything else has to be on point to rock a look like this – and it’s interesting that they’re blending some traditional American elements in with this very louche Euro 70s look.  I just love the lines of this thing.  The shoulders are slightly broad, but not extraordinarily so, and the body remains tightly tailored, but not in the too-small-my-buttons-are-straining way that you see on a lot of guys these days.  The two-button front functions to lengthen the whole look, as well, which is quite flattering.  The combination of big lapels and tailored elegance reminds me of 70s Saville Row – Michael Caine in Get Carter for example.  But like all RL, it’s also very American, with the button-down collar and fake-heraldic graphic tie.

I’m not prepared to trade in all my suits for big lapels and long lines, but it’s certainly an inspirational idea, and it’s exciting to see as big a ship as Polo sailing against the current.