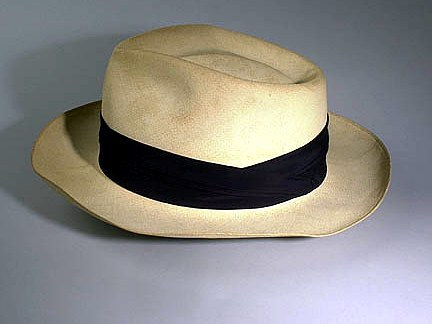 This Saturday, September 15th, marks the end of what used to be known in the United States as straw hat season. You see, in the early 20th century, it was considered socially unacceptable to wear straw hats past this date. If you ignored the rule, you’d be ridiculed at minimum. At most, you’d have your hat knocked off and stomped on by youths. This was actually a well established enough tradition that newspapers would publish warnings of the impending arrival of the fifteenth, so that people would remember to switch to felt for fall.

On September 13th of 1922, however, two days before the official deadline, eager youths in New York City decided to get a jump on the tradition. They started on Mulberry Street in Manhattan, knocking straw hats off factory workers’ heads before moving onto dock workers. Unfortunately for them, the dock workers fought back, and a brawl large enough to stop traffic soon erupted. The police eventually came, broke up the fights, and made some arrests.

The next evening, more youths went into the streets, but this time armed with large sticks, some with nails driven through the tips. They’d then form gauntlets and compel men wearing straw hats to run through them. Other hoodlums would hide in doorways or behind cars, then dash out, ten or twelve strong, and attack one or two men before fleeing. Along one street in the lower west side of Manhattan, attackers lined up along the car tracks and yanked straw hats off the heads of passengers as the cars passed. Even a few off-duty policemen wearing straw hats found themselves attacked.

Broken hats were strewn all over the streets where such incidents happened, and any hat store kept open late that night was crowded with people needing something new to wear. Most of them opted for something made from felt.

By the end of it, a number of arrests were made, some people were treated for serious injuries, and many, many straw hats were broken. The tradition of hat smashing continued for some years after that, but 1922 is considered to be the worst year of it (though, one man was killed in 1924 when he resisted having his hat smashed). At some point, the tradition of switching from straw to felt died off, and with it, so did the tradition of hat smashing. Today men can safely wear straw hats past the 15th, but they’ll just look seasonally out of place.

If you wear hats, switch to felt starting this Saturday.