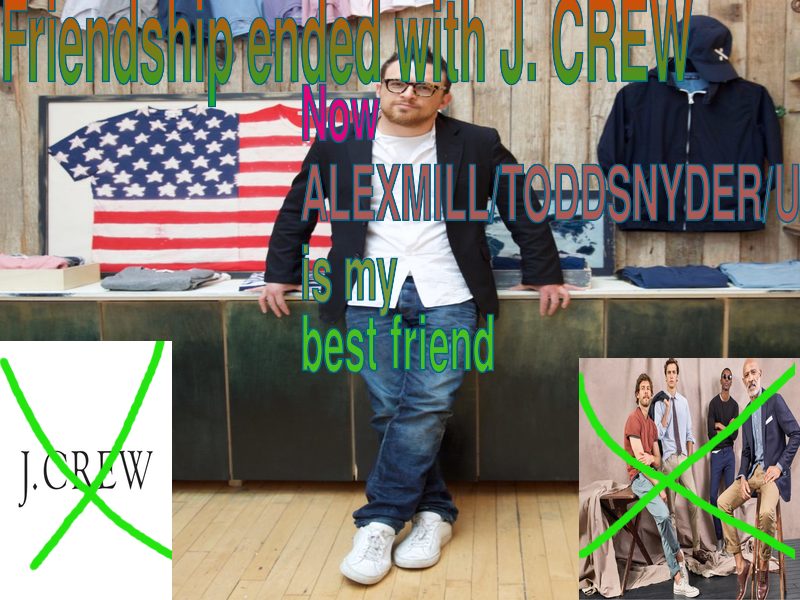 It’s been weeks since J. Crew declared bankruptcy. We’ve been eulogizing J. Crew intensely and eloquently, and having a good cry about the loss of our favorite source for reasonable, and reasonably classic/universal, menswear. And yet, from the slim-khaki-draped coffin, a knocking sound can be heard. J. Crew stores are closed right now, sure. But in the era of COVID-19, so are nearly all clothing stores, especially mall-based stores. They’ll likely re-open — declaring Chapter 11 doesn’t always mean a company is going out of business entirely.

But those of us who shopped at J. Crew, even if less often in recent years, may need to find alternatives, anyway. J. Crew’s problems weren’t rooted only in the aesthetics of their clothes and stores; for a decade, it’s operated under a ton of debt. The experts suggest that J. Crew will at least close some retail locations and potentially undergo a more significant reorganization. A restructured, leaner J. Crew may be less likely to take the chances that attracted guys to it for the last two decades: outerwear and footwear collaborations with heritage brands; suits and shirts with English fabrics; reliable, everyday style; and, let’s face it, reliable discounts.

Few options can totally replace J. Crew — it’s hard to overstate how easy it’s been to shop from a store with such a broad collection, so many locations, a decent website, and the sophisticated logistics that keep the whole machine well-oiled. But there are a lot of brands that work in the same general space and hit some of the quadrants J. Crew did: American-influenced styles, items that play well with other brands/wardrobes, cuts that work for a pretty broad range of men, and good (if not tremendous) value.

I’ve never been a huge fan of J. Crew’s oxford or dress shirts. The collars are smaller than I prefer although the fabrics and quality seem pretty good for shirts regularly available for around $50. I liked their more casual shirts, though — they offer flannels and madras every year in well-considered colors and patterns.

Your best options in this area are likely from brands with connections to J. Crew. Alex Mill is designed by Somsack Sikhounmuong, who used to be head of design at J. Crew, and it was founded by Alex Drexler, son of longtime J. Crew Chairman and CEO Mickey Drexler. Alex Mill doesn’t offer anything quite as dressy as the most formal J. Crew shirts, but their standard shirt is washed, slightly rumpled, with a point collar and some American-ish details, like a front placket — not too far from J. Crew’s. They’re a little pricier than J. Crew at around $100 to start.

Todd Snyder, another J. Crew alum (who snapped up J. Crew’s famous Liquor Store location last year), is probably the closest overall analogue to J. Crew in approach, but Snyder’s stuff is significantly more expensive and a little more daring. Snyder offers a bright gingham button-down collar shirt that seems like an update of J. Crew’s ubiquitous shirt, and some genuinely interesting seasonal stuff, like big prints and terry-lined cabana-style shirts. The make varies some, and there are collaborations with shirtmakers like Hamilton and an Italian maker for wear-with-a-suit stuff — shirts start around $150.

Taylor Stitch also does a nice job and keeps the price under $100, for the most part. TS’s fabrics are a little burlier than the other’s mentioned here, and the patterns subdued but not boring.

If you’re on a budget, I’ve found Uniqlo’s oxfords to be pretty nice, although not as consistent as J. Crew’s. Note that they’re basic OCBDs are an “easycare” blend — most of the others here are cotton, which I prefer.

It’s been a few years since J. Crew won out in my comparison of mass-market khakis, and I still wear my J. Crew pants a lot — they’re comfortable, neither low nor high rise (though a little lower than I prefer these days) and inexpensive enough that I don’t worry when I spill something on them or otherwise ruin them.

In addition to the brands mentioned undershirts, Bonobos compare well with J. Crew’s basic khakis — they’re similarly slim and sort of generic in a good way. The bonus is that they come in a variety of fits and inseam lengths, so you can potentially avoid a trip to the alterations tailor. Although they all seem to have stretch fabric these days, and call me old fashioned but I prefer all-cotton. They’re mostly under $100.

I’m intrigued by Entireworld, the project from Band of Outsiders’ Scott Sternberg. It seems to fit somewhere among Band, J. Crew, and 2000s American Apparel. Their flat front trousers seem like a potential successor to J. Crew’s basic office pants, although they’re a little more expensive.

A good pick, and a great value, appears to be Spier and Mackay, whose khaki cotton pants start at $48. A dressier option is Dapper Classics, whose wool trousers I’m a big fan of and who still carry made-in-USA cotton trousers for <$150. I also like Sid Mashburn’s khakis, but they’re a bit more expensive for wear-around pants.

In many ways, J. Crew’s Ludlow model suit was the suit of the 2010s. Unobtrusive, slim, with narrow but not obnoxiously narrow lapels, it was the right suit for the guy who doesn’t wear a suit often, and a pretty solid first suit for a guy who might buy more. Ludlow prices range pretty widely from cotton suits around $400 to nicer wools for over $600, and “Ludlow” itself doesn’t mean a whole lot — some of these models are unstructured and casual and some are business/wedding formal.

The most obvious alternative is SuitSupply, which at this point has been on the scene for a decade and offers a decent wool suit for under $400 at the low end — hard to over-emphasize how hard that was to find 15 years ago. We’re also big fans of Spier and Mackay for suits at the ~$500 price point. Like J. Crew’s, the prices vary a lot depending on the fabric (showing you pretty clearly how big a factor fabric cost is in a modern suit) — the Solaro suit shown above is dynamite; J. Crew wishes they could make this suit. Both of these brands are maybe a little more formal than your average Ludlow, but better value in my opinion.

For years I wore J. Crew’s pocket tshirts almost exclusively, and I often find something to like in their collections of ties, pocket squares, and hats. For alternatives, I’d consider exploring some smaller brands. For about $10 more than J. Crew pocket tshirt you can get one from 3sixteen that’s significantly better put together, or a colorful one from Noah if you don’t mind a little branding.

As for accessories, I find good value for pocket squares in J. Press, Kamakura, Kent Wang, and the Knottery. (Not to mention Put This On’s own.) You can’t beat the Knottery or Chipp for knit ties. I buy a million baseball caps, and heartily recommend Fair Ends and Ebbets  (who regularly collaborated with J. Crew). And American Trench makes terrific socks.

The unexpected overall recommendation in place of J. Crew might be Abercrombie and Fitch. Though pitched a little younger than J. Crew and missing J. Crew’s more formal clothing areas altogether, Aaron Levine’s A+F  makes some nicely designed, straightforward men’s classics, like a washed denim jacket or a field shirt. Patterned camp shirts and western shirts abound, if you can dodge the branded stuff. The best part is that it’s all priced extremely reasonably and it’s still in dozens of malls across the whole country. Next time you’re in a mall (that may be a while), it’s worth stopping in to check out. No one’s judging you.