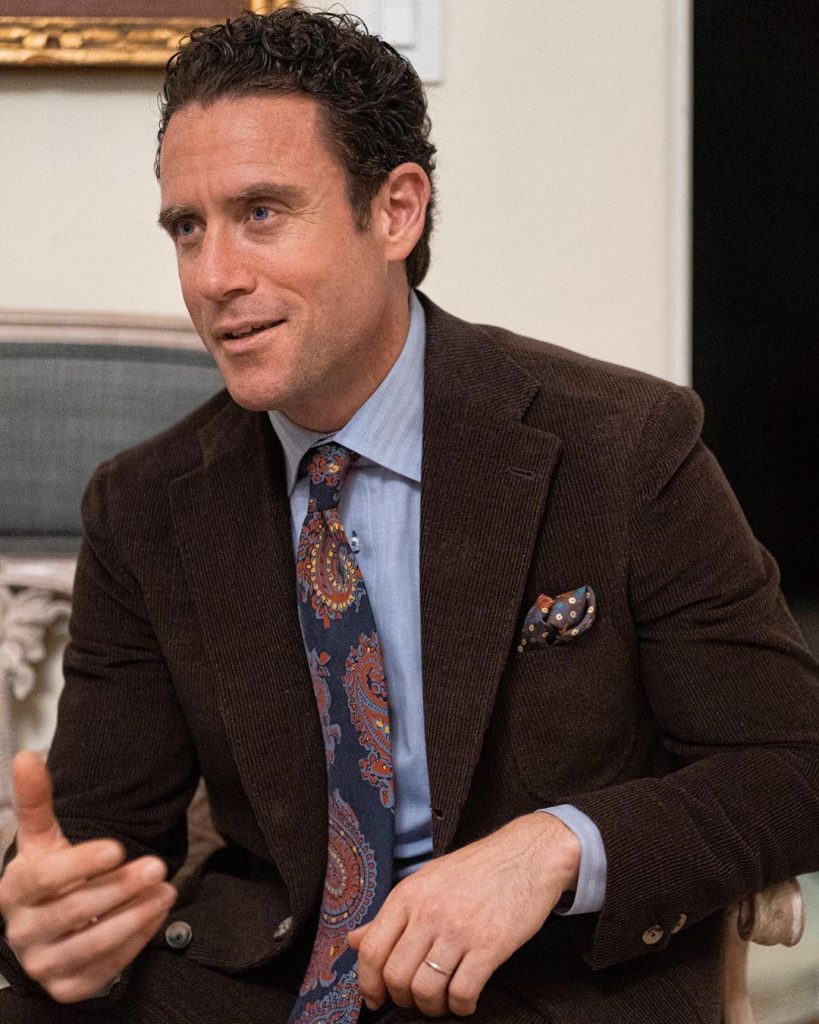 If the suit is dead, the industry around lamenting its demise is alive and thriving. Over the weekend, Richard Godwin penned an article for The Guardian about how sweatpants and sneakers have taken over as the modern work uniform. His article starts with a story, possibly apocryphal, about a scruffy American who tells him, in a bathroom no less, to never take a job that requires you to wear a tie.

“I tried to explain that I liked my job. And I wasn’t forced to wear a tie, I chose to wear a tie. I liked ties!” Godwin wrote. “I liked how the French actor Romain Duris paired his tie with a high-collared leather jacket in the movie The Beat That My Heart Skipped. I liked how those old Italian dudes wore their ties on The Sartorialist blog. I liked how I never used to wear a tie, and now I did, and that meant I was a grown-up. I liked how people sometimes went: ‘Ooh, looking sharp,’ and they definitely hadn’t said that a few years before, when I thought a Sparta Prague football shirt was the way to communicate how cosmopolitan and discerning I was.”

I also like ties. And while I’m not as doom-and-gloom about casualwear, I wish there were more opportunities to wear traditional neckwear. The good news is that, with holidays around the corner, this is a good time of the year to dress up. If you ever need an excuse to wear a tie, a holiday party or a special dinner is the perfect occasion. Who cares if the other patrons are dressed down? Wear something because it makes you feel good. Here are some principles for choosing better tie combinations, which can be used year-round, but set here with some fall/ winter examples. 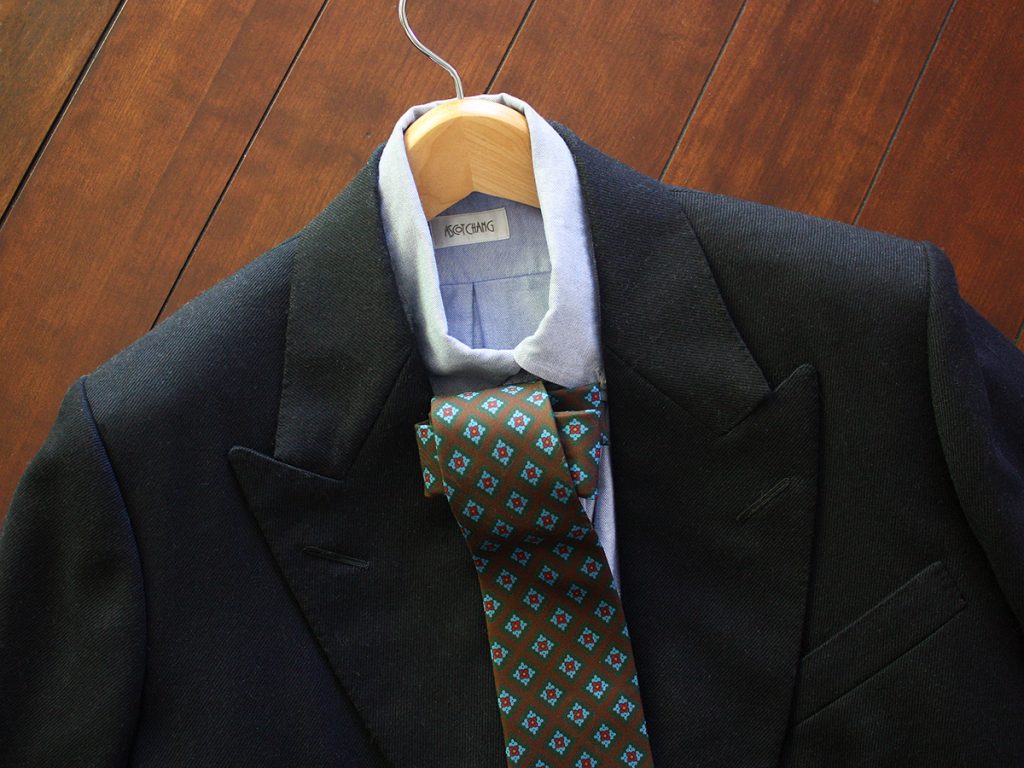 If you’re aiming for a small and versatile neckwear wardrobe, start with a solid-colored grenadine and a basic rep stripe in dark colors such as burgundy, navy, and forest green. These are the sorts of ties you can wear with everything from sport coats to suits for almost any occasion. But if you want something more seasonal, first consider the material.

Spring/ summer options can be a bit limited. When the weather is warm, seasonal ties tend to be mostly made from slubby raw silks and crisp linens. But once the weather gets colder, options abound — you get wool in all of its iterations, including cashmere, tweed, Donegal, boucle, and various mixtures. Wool challis, which is a corruption of the Indian word “shallee,” meaning “soft,” is a more delicate version of wool that has autumnal charm without any bulk. It’s also easier to get patterns in wool challis. For generations, there was a small industry in England around hand-block printing wool challis in designs such as small geometrics and paisley. Today, those patterns are mostly silk-screened for efficiency and consistency.

My favorite ties this time of year are generally made from ancient madder, which is a soft silk with a chalky hand. Paul Winston over at Chipp Neckwear, a sponsor on this site, once told me he thought ancient madder feels like a horse’s wet nose. I’ve always thought that was a charming description. Ancient madder drapes beautifully and often has a muted look. Modern versions are more vividly colored than old-school varieties — partly because the old ancient madder printing methods were found to be hazardous to the environment. But ancient madder still has less sheen than most silks, which makes it pair exceptionally well with velvety corduroys, rough tweeds, and napped flannel.

Chipp Neckwear sells the most affordable ancient madder ties around. Their ties are made in New York City from the same English silks used by top-end producers, but cost a fraction of the price. Paul says he has a limited run of a brown paisley available at a discounted rate of $60. To order, just give him a call at (212) 687-0850. I also particularly like the wine-colored diamond motif. 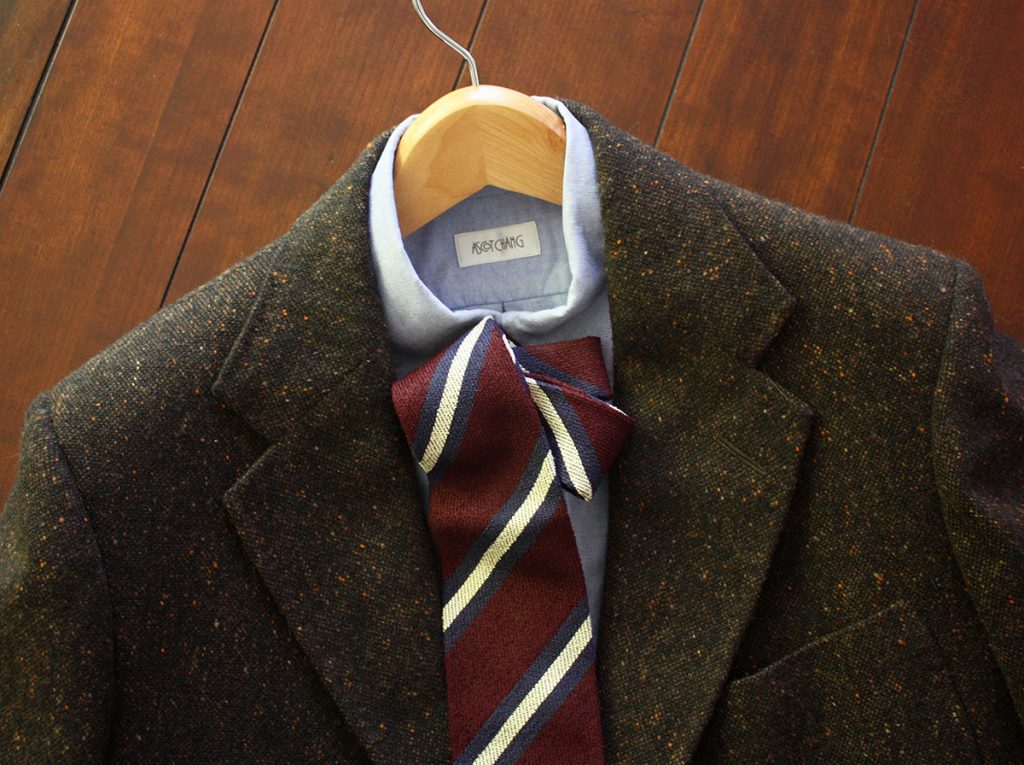 After material, consider the visual weight of your pieces. Any number of things can determine visual weight: the scale of the patterns, the color, the visual warmth, the saturation, the shades, the texture, and the general intensity. In the photo above, I have a burgundy striped boucle tie paired with a dark brown Donegal sport coat and light blue oxford button-down. A visually stronger, burgundy striped tie here helps anchor the combination and gives the eye something to rest on.

A dark tie will go with almost anything. In traditional men’s style, the focus of an outfit is often centered on the shirt-jacket-and-tie combination. By placing a darker tie in the open V-space, you can help anchor the pieces, so they don’t visually float away. But if you want to add a little variety to a wardrobe, consider how a slightly scaled back color can be worn with similarly light-colored sport coats.

In the photo below, I have a muted red wool challis tie paired with a tan Donegal tweed. When you scale back the color saturation of both the tie and coat, you can create a slightly more interesting tone-on-tone effect. This combination is similar to the idea of balancing weights — keeping things a little more in harmony with each other, so nothing, by itself, becomes the single focus of attention. 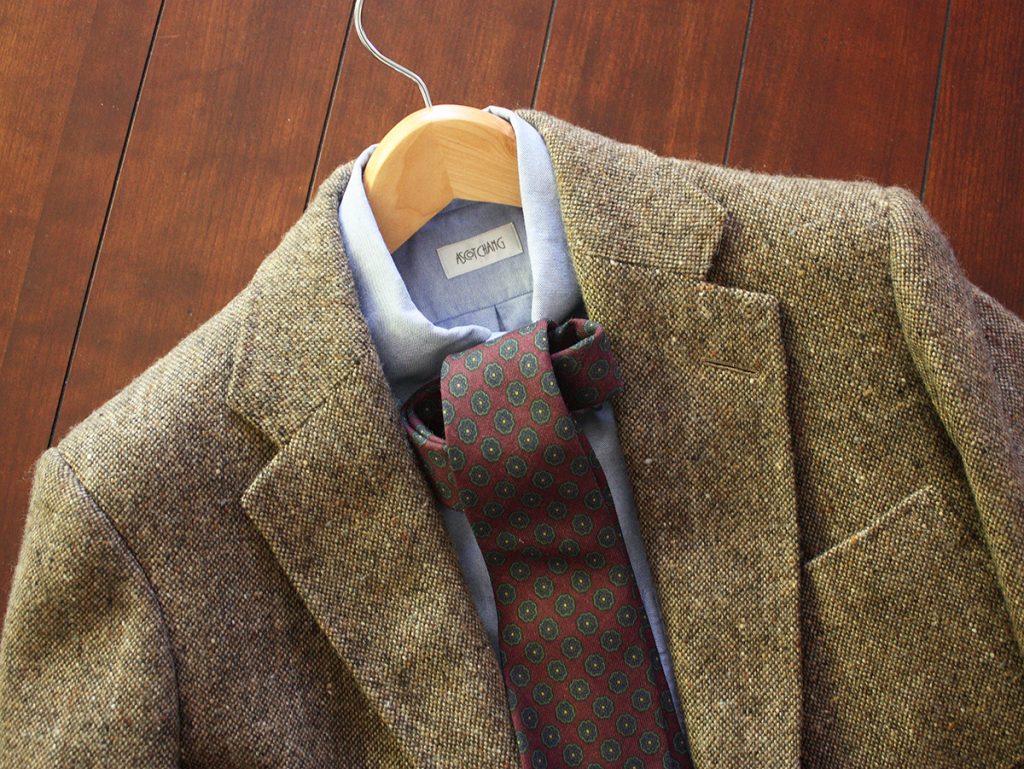 The example above also shows how patterned ties can be used to break up what would have otherwise been a solid-colored ensemble. Having no patterns can leave an outfit looking a bit flat and dull; having too many runs the risk of things clashing. There are exceptions to this, of course. Formalwear is the most obvious one. And ensembles such as a navy suit with a crisp white shirt, folded linen handkerchief, and a solid navy tie will always look wonderful. For everything else, I usually try to stick to just one or two patterns. This adds visual interest, but not so much that worry about whether I’m creating a dizzying eyesore. When building a neckwear wardrobe, consider having some solid-colors and patterns on hand, so you can more easily add or take away visual interest when necessary. 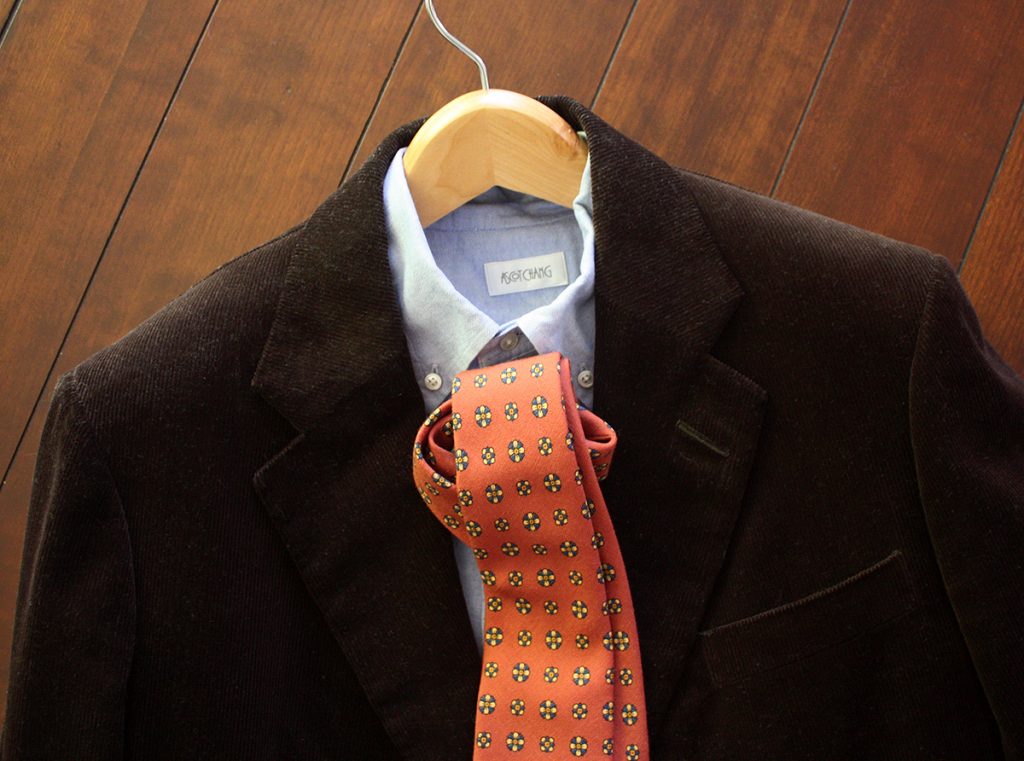 Most men’s wardrobes rely on colors such as navy, grey, and brown. Consequently, ties are similarly quiet, following a tradition that dates back to Beau Brummell. But very sedate ties can, at times, be a bit boring. For a holiday party, you may want to go for something brighter and cheerier.

If you’re looking to incorporate stronger colors into your wardrobe, start with accessories in rust, orange, or ochre. In smaller doses, such as a tie or scarf, they can add personality to an outfit without overtaking them. Plus, with things such as a bright purple jacket, you can only wear them once every few months before people notice you’re wearing “that” coat again. Accessories in rust and ochre are distinctive but unobtrusive. My friend David Isle once noted these colors are “particularly good with brown sport coats, where they’re like a streak of red clay in a muddy riverbank. Or with green sport coats, where rust is red enough to be complementary, but not so red as to look like a Christmas costume.”

You don’t need a ton of them. An excellent place to start your spin around the rest of the color wheel is a rust- or gold-colored grenadine, rust-colored knit, blood orange ancient madder, or even a pale yellow English foulard. Lighter-colored ties will pair better with similarly lighter colored sport coats, whereas darker ones and those in more saturated colors will be a little more versatile. If you have something such as a Donegal tweed, these brighter colors may also pick up some of the brighter flecks in your coat. 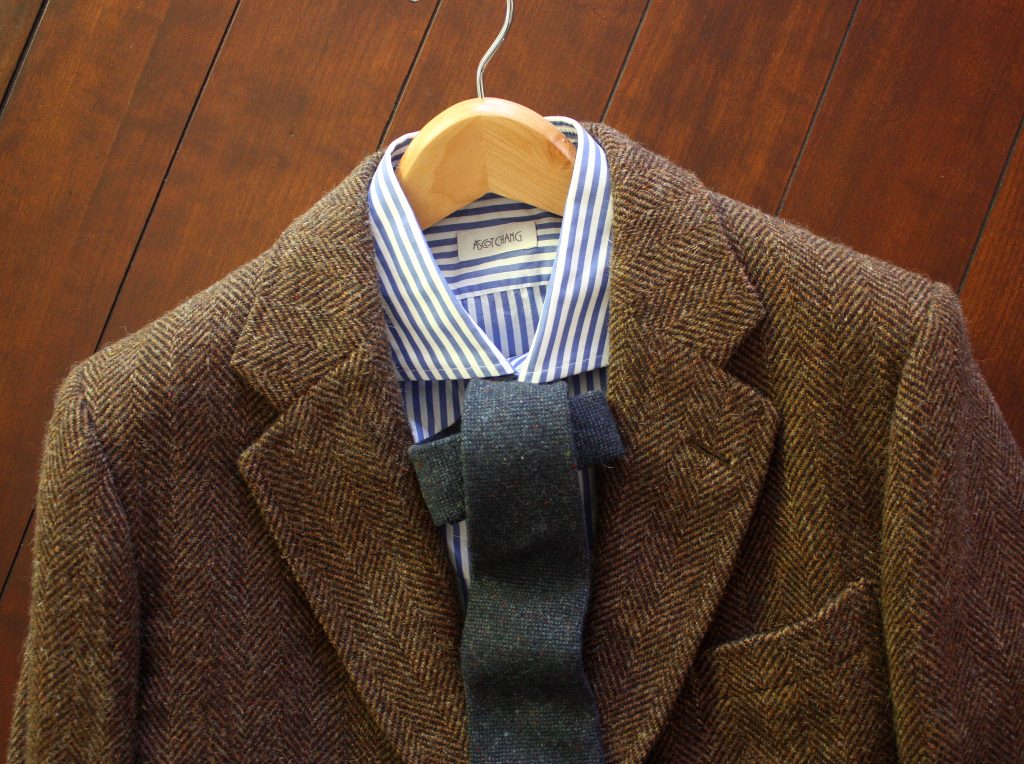 The rule for combining patterns is pretty simple: vary things by type and scale. In the photo at the very top of this post, our friend Peter can be seen wearing a ribbed corduroy suit with a mini-herringbone shirt, large paisley tie, and polka dot pocket square. By varying the scale and type of his patterns, he keeps things looking distinct, instead of having them clash together.

Like the other photos above, I try to keep things simple. If my jacket and shirt are solid-colored, I wear a patterned tie to add visual interest. If my coat and tie are patterned, on the other hand, I reach for a solid-colored tie. This principle is one of the reasons why grenadines are so useful. They have just enough texture to go with solid-colored ensembles, but they’re plain enough to pair with patterns. This way, you’re assured that nothing clashes without having to check twice.

Solid-colored wools, including the Donegal tie you see above, are great for this sort of thing. Like grenadines, they also have a bit of texture. They’re cozy, autumnal, and pair well with patterned tweeds. Just be careful about the material’s weight. Sometimes tweed ties can be a bit thick and thus look bulky, especially around the knot area. EG Cappelli and Vanda’s wool ties are nice in that their materials are often uncommonly soft and they typically use only the lightest of interlinings. Sam Hober also offers handmade bespoke ties, which allows you to get exactly what you need.