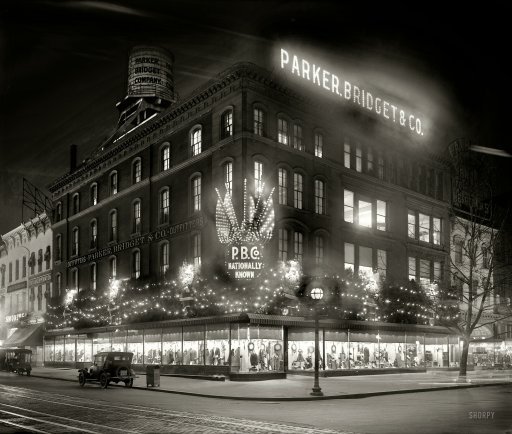 Let’s be honest: Black Friday and Cyber Monday have turned into shopping holidays when we get stuff for ourselves. Now is the time we get things for friends and family members. So, coming just in time is our holiday gift guide – things that would be awesome for anyone in your life.

Before we get started though, we’d love it if you checked out the stuff from our beloved sponsors, and perhaps consider some of our goods. Like handrolled and handstitched pocket squares, made from fabrics picked out by Jesse – in individual or mail subscription forms. We’ve also got subscriptions to our Inside Track newsletter, should your loved one be a PTO reader.

You can also check out our past gift guides (as applicable today as they were then).

OK, to the gifts! Everyone (or at least everyone who eats pork) loves ham. Ham is a holiday staple, and country ham is an American classic. I take my ham recommendations from Jonathan Gold, the Pulitzer-winning LA Times food writer, and he says to try Nancy Newsom’s and Father’s Country Hams. Just remember – they’ll need to be soaked for a couple of days before they’re cooked, so you might want to share Alton Brown’s recipe as well. John Darnielle is the signer-songwriter behind the Mountain Goats. His songs have always been driven by lyrics in a way that’s unlike most rock music, and he’s finally taken the plunge into full-fledged literature. Wolf in White Van is a novel about a grotesquely disfigured, Conan the Barbarian-obsessed young man who runs a play-by-mail role playing game called Trace Italian. It stretches forward in time, as he faces a lawsuit from the parents of two teens who died while caught up in a fantasy inspired by the game, and backwards in time, as the protagonist slowly reveals the cause of his disfigurement. The book is a beautiful examination of teenage alienation – and a lot more pleasant to read than that description might suggest. Jerry Williams Jr. was a veteran of the music industry. He’d been a child singer on the chitlin circuit in the 50s, billed as “Little Jerry” Williams. He’d worked behind the scenes as a songwriter and producer for years. Then, at the close of the 1960s, he decided to reinvent himself as Swamp Dogg. As Swamp, he was funky, psychedelic and hilarious, but also very deeply and sincerely soulful. His voice sounds like a soulful mix of Van Morrison and Cher, and the songs are as good as it gets. His albums as Swamp Dogg were re-released earlier this year, and Total Destruction To Your Mind, his first, is the best of a very good group. Cook’s Illustrated is a beautiful, ad-free magazine devoted to carefully-tested recipes. Every month, you get half a dozen things you want to eat, with a charming and unpretentious presentation and easy-to-follow instructions. It’s tasty food for people who care about eating tasty food but maybe don’t own their own sous-vide. The Rising Sun workshop is in Los Angeles’ Eagle Rock, a mile or so from my house, so I stop in once in a while. The last time I was there, a few months ago, they had some of these chinos in a pile on the counter, and I was totally transfixed. They turned out to be headed out to retail stores, and they didn’t have any to sell me. Luckily, you can buy them now. They cost $235, but as someone who’s handled them, I can assure you they’re $235 worth of pants. In the 1930s and 40s, rayon was everywhere. The naturally-derived synthetic was a perfect substitute for silk in accessories, since it took a print well and was relatively inexpensive. There are still many of these scarves, now seventy or eighty years old, extant, and you can find them on eBay and Etsy, and in vintage shops. Expect to pay between twenty and fifty dollars for a particularly nice one – look for something which (obviously) appeals to your eye, but also look for something on the longer side.

Over the last few years, the web has gotten… well… creepier. More dastardly. The idealists who put together Web 2.0 have been replaced by the jerks who run companies like Uber. But there are still some good guys (and good girls) on the internet, and the Good Web Bundle brings some of the best. For $96, you get membership in some of the best community-driven sites there are. No idiotic Yelp reviews, no asinine YouTube comments. The memberships include MetaFilter, the wonderful user-driven blog and Q&A site and MLKSHK, the best image-sharing app around. Plus subscriptions and memberships to Newsblur, The Toast and ThinkUp. All folks working very hard to make the internet a fun, useful, and just place. I’m a photography dilettante and a sucker for outdated technology, so I like shooting film, especially black and white film. But it can cost a decent amount to get a legitimate camera that shoots film (there are PLENTY of underpriced, decent old cameras at Goodwills/thrift shops but most need at least some repair work). Ilford helpfully makes a couple of disposable cameras pre-loaded with their black and white film. The XP2 will give you at least 27 chances at capturing Cartier Bresson’s elusive “decisive moment.” Bring it on a night out or a road trip, fire away, and don’t worry about it too much. You can still get this sort of film developed at Walgreen’s, Target, or Costco. Tammis Keefe was a midcentury textile designer whose illustrations are hard to describe without using the word “whimsical.” Appearing on napkins, tablecloths, cocktail towels, etc., they vary from tasteful and abstract to goofy and loud, and they’re, allegedly, increasingly collectible (sorry, Voxsartoria). Keefe’s designs are widely available on Etsy and eBay, and her handkerchiefs are often made of linen and feature the rolled edges we look for in a quality square. Keep an eye on the size of the item, though; anything larger than 16 inches or so to a side can be tough to stuff in a pocket. Hip hop and comics are cultural categories with an unexpected amount of overlap. Both have exploded notions that they’re lightweight pop culture and are now appreciated as serious art, both richly reward deep inquiry, and both have pantheons of important figures and characters that generate endless debate. Ed Piskor’s meticulous books for Fantagraphics illustrate the early days of hip hop, when the form was still gestating in New York (volume 1), to its explosion in the early 1980s (volume 2). The names are familiar, the anecdotes are thrilling, and the throwback art style is a bonus. For the guy who likes an occasional drink or enjoys hosting parties, a spirit decanter can make a great gift. They’re just as much about making a room look nicer as they are about holding liquor. As everyone probably knows, the lead-crystal ones are beautiful, but dangerous to use. I recommend sticking to something made from pure glass. William Sonoma and Crate & Barrel have some nice models, but they’re a bit on the expensive side. For something more affordable (but just as great), check your local Target (I bought both of my decanters from there ten years ago). Reclamation Etchworks is also fun for something unique and old-timey. For anyone who doesn’t have a good Chinatown tea shop near them, Eco Cha is perhaps one of the most convenient ways to score some quality tea. Their leaves are left full, rather than shredded, and come from some of the best farms in Taiwan. I recommend their oolong gift packs for any tea lover (the Shan Li Xi High Mountain and Dong Ding varieties are absolutely delicious). One thing to note: these are looseleaf teas, so your giftee may need some equipment. You can get them a ceramic tea pot or tea infuser. I find the second easier to use. Who doesn’t like nice-smelling candles? Especially during the holiday season, when they can make a room feel cozy (extra bonus points if you live in the same house as the person you’re giving a candle to, so you can enjoy the scent as well). I recommend checking out Santa Maria Novella, Votivo, and Recendo. 3sixteen also sells candles, and I’m happy to say they don’t smell like six-month-old, unwashed jeans. Promise. A plain navy tie is both simple and luxurious. It goes with everything, and lends almost any outfit a bit of sophistication. My own, by Panta, is probably the tie I wear most. A beautiful version in heavyweight silk by Drake’s is pictured above. You can find a nice American take, with contrast tipping, at Ben Silver. Howard Yount has a flat knit version. Lands’ End even has a version in silk and wool for $20. Vanda Fine Clothing has about twelve different versions of plain navy, and they’re all lovely. You can even order bespoke (pretty affordably) from Sam Hober.