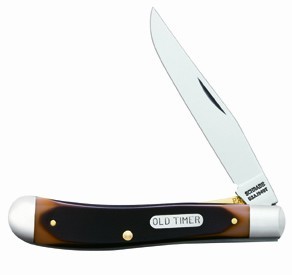 Jesse from Brooklyn writes: My uncle, although not a example of sartorial excellence, is a regular guy who does like things “done right, or not done at all”. He carries around a 3" Schrade “Old Timer” pocket knife made by the 100 year old American company before they were gutted and imported cheaper from China. Do you carry a trusty ol’ pocket knife at all? Is this a bit too working class for a man in an impeccable suit?

A knife is a great thing to carry, especially if you have reason to use it.  (A few ideas: cutting, slicing, stabbing.)  Better to keep it in a bag than in your pocket, where it can weigh down your trousers and ruin the line of your clothes.

I myself often carry a Swiss Army-issued knife that was given to me as a gift by a veteran of the Swiss army when I was a kid.  It’s like the classic Swiss Army knife, but with a textured steel body, rather than plastic or enamel.

I used to carry the knife in my bag every day, but I had to stop after I accidentally tried to bring it on a plane.  I mailed it back to myself, but that was enough to make me think twice, considering how forgetful I am, and the fact that I fly once a month or so.

It just so happens that our friends at Archival Clothing just offered a useful guide to pocket knives.  You won’t be surprised to learn that we think vintage is a great idea – rare is the antique mall or vintage shop that doesn’t have at least a few good folding knives under the counter for twenty dollars or so.  Hopefully there’s someone in your neighborhood who still cleans and sharpens cutlery – a few bucks and that knife will be as good as new.

One request: don’t wear a leatherman on your belt, no matter how impressed your coven or the rest of the set-builders in your community theater group may be.