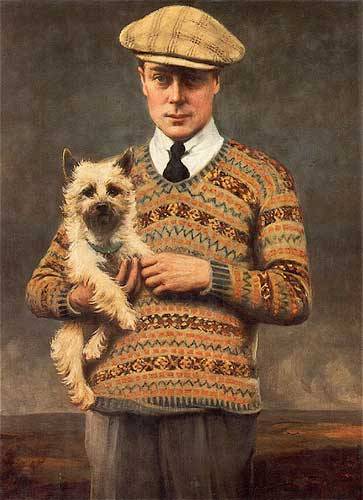 David writes: What’s the story on pleated pants? I keep thinking they are outmoded, but is that so? I’ve got several suits and slacks that are pleated, and if I can wear them without embarrassing myself, I’d be happy. They all fit fine, but again, I wonder.

The short, easy answer to this question remains: yes, they are outmoded.  There is, however, a longer, fuller answer which isn’t so simple.

Pleats in your pants serve a few roles.  They facilitate ease of movement and allow for (if desired) a fuller cut.  Most importantly they help maintain a clean line from your waist to your shoe.  Whether deep or shallow, they do a great job of maintaining that nice clean line, and or that reason, they were largely standard on men’s dress pants until not so long ago – the mid-90s or so.  Check out the voluminous pants on the young Duke of Windsor (above), and note how the pleats keep that crisp front crease.

In part, the anti-pleat was a reaction to the pleat-crazy late 80s, when the fashionable reacted to concerns about flooding by wearing pants that, by virtue of their many and generous pleats, could double as sails on a dinghy or life raft.  It was also a function of the jeans-ization of men’s pants.  Jeans and other work pants are made as simply as possible, and don’t need to hold a crease, so they don’t have pleats.  Their waistlines have also dropped from the natural waist to “barely cover the pubes” over the last 20 or 30 years, and pleats tend to billow in weird ways when they start at the top of your weenis, rather that at your waistline.

So: what does this mean for you?

Never buy pleated jeans, no matter what Marithe and Francois Girbaud tell you.

For other pants, it is your decision.

The safer choice is flat-front (unpleated) pants, which have been the rule for ten or fifteen years now.  The pleated-front, however, is both returning, fashion-wise, and probably the more classic choice.

If you do go with pleats, remember a few things.