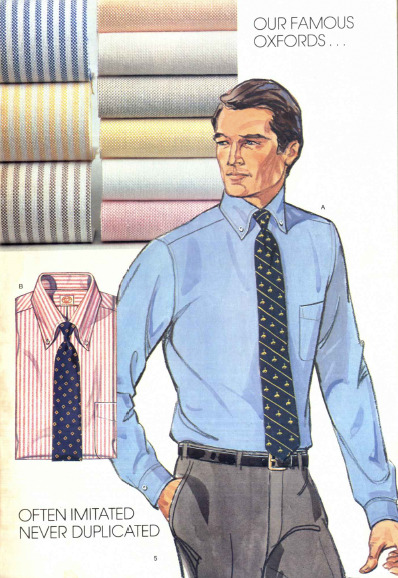 Nik writes: On the menswear blogs I follow, I always see the blue Oxford button-down as the go-to shirt for any occasion, the “only shirt you’ll ever need”. However, I rarely see a button-down worn in a business setting, with a suit and tie, here in Europe. Do I suffer from selective vision or is it an inherently American style (since almost all of the men’s style blogs hail from the States)?

The OCBD is probably the greatest American contribution to menswear. The shirt features a soft button-down collar and cotton in a durable, richly textured oxford weave. Colored oxfords often combine colored thread with white, creating the soft colors seen above. Oxfords were pioneered by Brooks Brothers at the turn of the 20th century, and they’ve been the classic American casual shirt ever since. Brooks still calls the oxford the “polo” shirt, because the button-down collar was originally seen on polo players. It’s an incredibly versatile shirt, and looks great in a wide variety of contexts.

Its popularity here in the US means that you will often see it paired with a suit. This can be pulled off, especially with a casual suit – say cotton or tweed. It pairs very well with sportcoats and bow ties. It’s mostly worn in a business context, though, by people who just don’t know any better. (There are exceptions: Yankee types steeped in “trad” style might pull it off in a conservative business context.)

In Europe, you might see a button-down collar on a more high-collared Italianate shirt, but the classic OCBD is a relative rarity. More typical is a variation of the traditional English shirt, with a stiffer, spread collar and fabric in a finer weave (a fine oxford is called a “royal oxford”) or a weave with a harder finish, like a poplin.