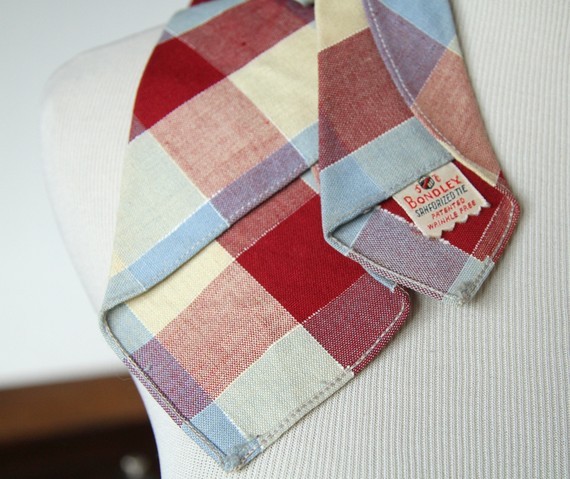 Eijah writes to ask: For the second time, I found myself with a vintage tie I’d bought online that was far too short. I clearly need to pay more attention. The last time this happened, I decided I wasn’t crazy for the tie anyway, and so I gave it away to be someone else’s problem. This time, however, I really like the tie in question, which you can see here http://www.etsy.com/transaction/50877227 Like the last one, strangely, this very short tie doesn’t have much or any lining inside of it, and so is pretty thin.

First question: Why are these ties so short? Are they kids’ ties? Are they from back in the day when everyone had a vest or a double-breasted jacket and ties didn’t usually reach too far? (When I tie it normally, it reaches just past my chest.)

Second question: Is there anything that can be done? I really think that I could pull this thing off in the summertime, but the only possibility for wearing it as a tie that I can think of is to have a tailor add a big chunk of random fabric around where it would be on my neck (like the solid section of a knit tie) and hope that it’s never visible. That doesn’t seem like a great idea. The only other thought that came to me is taking it to a tailor and seeing if it can be turned into a pocket square, but I don’t know if that’d be some kind of horrible blasphemy or what.

Let’s address why vintage ties are so often shorter first, then address your craft project ideas.

There are a few reasons older ties are often shorter.

Also of note: that type of unlined tie was not uncommon in the 1960s and earlier, particularly for “Ivy League” styles and more casual ties.

Now: about your craft projects…

I love the creativity of the neck addition, but it’s so short that unless you’re a very small man, even adding 10" to the tie would still leave it pretty short. I think it’s possible, though, if you can find a tailor willing to take on a completley cockamamie project.

As far as turning it into a pocket square – if, unfolded, the tie is big enough, then that should be a pretty straightforward process. I’d make sure there’s no wear or discoloration along the folds before I tried it, and I’d expect to pay a tailor or seamstress about $20 to roll the edges.