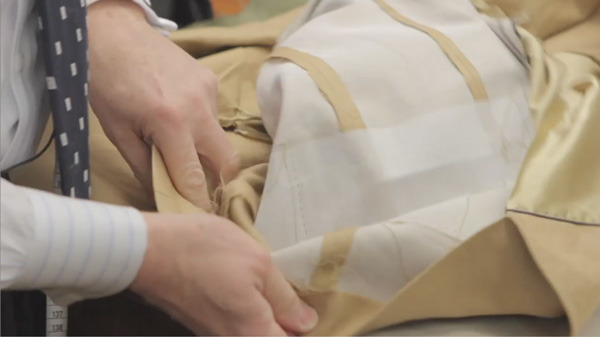 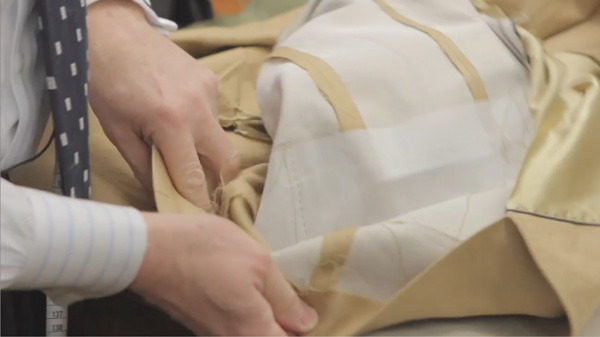 Wes writes: I was checking out a Joseph Abboud blazer at Syd Jerome here in Chicago. I inquired about the construction and dude mentioned that it was fused. I said “whoa whoa whoa – Jesse Thorn told me that fused was bad and that canvassed was good – this is supposed to be a super high-end menswear store so why are you pitching me this fused scenario?” (I’m paraphrasing, of course) – dude replied that the jacket was “fused, not glued.”

Is there a real distinction fused and glued or is this just sales mumbo jumbo?

Inside of every jacket is a layer of canvassing. This is the full-bodied fabric that gives the coat its shape, traditionally made from horsehair. Coats are three-dimensional garments – they don’t just drape over the body, they have a form of their own, which is intended to make you look better. Without the canvassing inside, flattering the body is exceptionally difficult.

In most garments you buy at the department store, this layer of fabric is attached to the coat’s outer layer of fabric by fusing – fabric glue. This fabric glue is usually impregnated into the canvassing, and activated with heat, sort of like an iron-on patch. Because the glue and fabric are essentially one, synecdoche leads the whole strengthening layer to be reffered to as the “fusing.”

In higher-end garments, the canvassing is “floating.” It’s attached (often by hand, sometimes by machine or a combination of both) to the outer layer of the garment with strategic stitches. This allows the outer layer of fabric to drape more smoothly over the canvassing, and move more easily. It also gives the tailor or garment-maker more precise control over the shape of the garment.

In some cases, portions of the garment are fused (for example the bottom half of a jacket’s front) to save money, while more important bits (like the chest and lapels) are “canvassed.” This is usually called half-canvassing. Brands like Brooks Brothers and Polo use this technique as a compromise between the expense of a fully-canvassed garment and the drawbacks of a fully-fused one.

There was a time when fusing technology was very poor, and it would often pucker and bubble with wear, especially after dry cleaning. That’s less common these days, as industrial adhesives have improved significantly. There are fused garments that can be quite good in quality, though they’re unlikely to match or exceed their canvassed counterparts. These days, more likely than puckering for a lower-quality fused garment is a coat that doesn’t have much shape or drape, or loses its shape with wear and cleaning.

We visited Len Logsdail, a custom tailor in New York, to talk about jacket construction for episode two of season two, which will be out in a couple of weeks. (In fact, those are his hands in the screencap above). He said if you have the dough, canvassing is the way to go – it’s more durable, and gives a garment more shape. He also said that if you haven’t got the dough, go with your gut. If a fused jacket flatters you, and the price is reasonable, that’s the one to choose. Either way, the salesman’s probably selling you a line.

(And in response to your question: yes, fusing is definitely a kind of glue.)

Filed Under: Best Of, Q and Answer, Suits