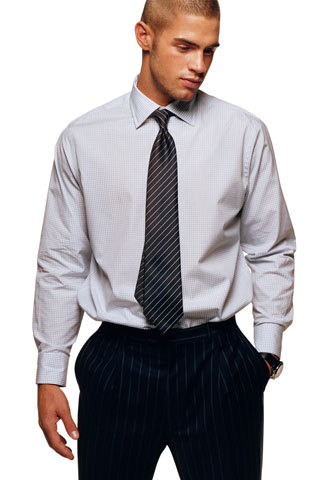 Gary writes: I just got a new job and am having to wear dress shirts for the first time. I went out this weekend and tried a bunch on, but all of them seem to blouse and billow over the top of my pants. Is there any way to fix this, or do I just have to keep searching for the perfect shirt?

Ready-to-wear clothing rarely fits perfectly off the rack. Remember, garments are made with an imaginary person in mind, usually someone that’s an “average” of the demographic the company is trying to target. You’re unlikely to be that exact average, so some alterations will likely be necessary.

The less you alter a garment, however, the better. So the first step is to find a shirt that fits as well as possible. After you find one and purchase it, take it to the tailors to have the sides slimmed down. This will take out most of the billowing, but be sure to not go too slim. You want to be able to sit down and have a full meal, after all.

If you’d like, you can also have darts put in. These will help reduce the fullness in the lower back. They’re good for most men, but if you stand with a bit of a hunch, note that they’ll accentuate your less than ideal posture (as they’ll create a bit of an S curve from your side profile). You can get them put into one shirt and see how you like the effect. They can be taken out afterwards if you don’t like them, but on many cotton shirts, this will leave some faint lines where the darts used to be. The job of taking in the sides and putting in darts should probably run you something like $15.

If you find that you still have some blousing even after alterations, you can try the military tuck. That’s when you tuck your shirt in straight, but then pinch the sides and pull them back to reduce fullness. You can see a simple guide on how to do it here.

A good alterations tailor and military tuck will solve most of the billowing, but if you’re striving for perfection, you’ll likely need to go custom. I’ve written a seven-part series on custom shirts, which you can read here.

This is one area where I find bespoke makers to be a bit better than most made-to-measure services. With a good bespoke tailor, you’re getting a custom pattern drafted from scratch. With made-to-measure, the company is usually altering an existing pattern through some computer program. The first, from my experience, allows you to more easily account things that might not be easily captured by simple measurements. For example, my tailor (Ascot Chang) lowered the waist point on my first pattern, so that narrowest part of the shirt aligned with the narrowest point of my torso. This allowed the shirt to better transition as it moved down to my hips, thus distributing the fullness perfectly when my shirt is tucked (like this). That kind of adjustment is often not possible through made-to-measure, and isn’t something an alterations tailor can do for you.

Bespoke shirts are expensive, however. If you don’t mind the cost, I think they’re worth it. For most men though, a $15 alterations job and military tuck will deliver most of what they need.